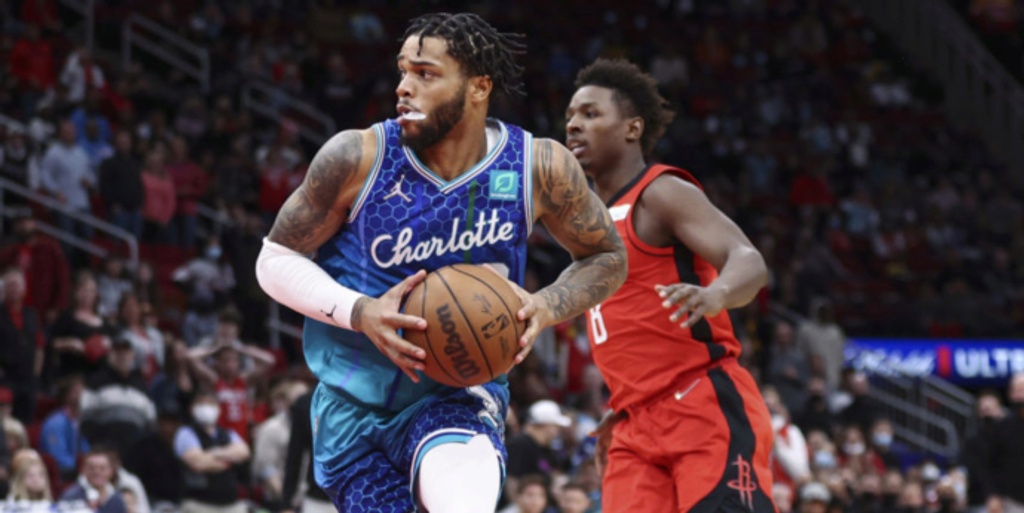 After examining the best guards up for grabs in free agency, let's rank the top free-agent forwards set to hit the open market this summer:

Charlotte reportedly offered Miles Bridges a contract extension worth $60 million over four years this past summer, which was rejected. With Bridges exploding this season (averaging a career-high 20.0 points, 7.1 rebounds and 3.8 assists), the Hornets' front office likely regrets not upping that offer, as the stud power forward is now in line for a massive pay raise. He is one of only five players in the NBA this season to have knocked down at least 125 three-pointers while also averaging at least 20/7/3. The other five players are LeBron James, Luka Doncic, Jayson Tatum and Karl-Anthony Towns.

Lu Dort established himself as one of the league's elite young defenders early on in his career. This season, he has proven he is also capable of putting up points on the offensive end. Before undergoing season-ending shoulder surgery earlier this month, Dort was averaging 17.2 points, 4.2 rebounds, 1.7 assists and 2.5 made three-pointers. Over his final eight games, he averaged more than 23 points a night. The Thunder front office has an interesting decision to make. If OKC exercises its team option, Dort can become an unrestricted free agent in the summer of 2023. However, he would be eligible for a four-year extension worth up to $58 million in that scenario. Dort would become a restricted free agent this July if the option is declined.

A trade from Sacramento to Detroit has given Marvin Bagley a much-needed opportunity to revive his career. He has scored in double-digits in each of his last seven games for the Pistons, and is averaging 16.0 points (on 56.7% shooting), 7.3 rebounds and a steal during this current stretch. According to Evan Sidery of BasketballNews.com, "the most plausible scenario — unless Bagley is completely sold on his long-term fit in Detroit — is to sign a one-year qualifying offer to make him an unrestricted free agent in the summer of 2023."

Robert Covington, who is now on his fifth team in the past four years following the trade that sent him from Portland to Los Angeles, has seen his production decline in recent seasons. However, the 31-year-old RoCo is still capable of contributing on both ends of the floor due to his 3-and-D skill set.

It seems as though Nic Batum has been around forever, but he's only 33 and has proven this season that he has plenty of treads left on his tires. Although his stats don't jump off the page, nearly everyone in the Clippers organization has raved about how much Batum brings to the table — both on the court and inside the locker room — as a respected leader. Los Angeles, playing without its two superstars in Kawhi Leonard and Paul George, has greatly exceeded expectations this season, and Batum, one of LA's most valuable all-around players, is a significant reason why. He'll have plenty of interested suitors this summer. Expect him to opt out and cash in.

Chris Boucher is in the second season of a two-year, $13.5 million pact he signed in 2020. After averaging 13.6 points and 6.7 rebounds per game in 2020-21, his production and efficiency have dipped in 2021-22. He shot 38.3% from downtown last season, but that number has fallen below 29% this year, as his scoring average has dropped to 9.1 points per contest. However, it's worth noting that Raps are allowing just 105.3 points per 100 possessions with Boucher on the floor, and that his Net Rating of plus-4.9 is tops on the team, just ahead of Pascal Siakam (plus-4.5).

Thad Young played well for Chicago in 2020-21 (averaging 12.1 points, 6.2 rebounds and 1.1 steals in just 24 minutes a night), but had spent most of this current season in and out of the Spurs' rotation prior to being traded to Toronto in February. A consummate professional who's well respected around the league, Young should draw plenty of interest from contenders looking for a reliable vet to bring off the bench.

Unfortunately, in late January, Joe Ingles suffered a torn ACL in his left knee that ended his 2021-22 campaign. Over the past few seasons, he has been one of the league's more efficient long-range snipers (he averaged a career-high 12.1 points and 2.7 made three-pointers per game in 2020-21); however, the Aussie swingman will be 35 years old in October and working his way back from a major injury to boot. On the bright side, Ingles' game was never predicated on athleticism. He said last month he has "zero doubt" he'll be playing in the NBA again.

T.J. Warren was a beast in the Orlando Bubble at the end of the 2019-20 season, when he averaged 31.0 points, 6.3 boards and 3.7 made treys. That said, he played just four games last season, and hasn't set foot on an NBA court during the entire 2021-22 campaign. He'll have to provide medicals to any team interested, but he's still just 28 years old. Some team will likely roll the dice on a one-year, make-good contract in hopes of Warren resurrecting his career.

Best of the Rest: