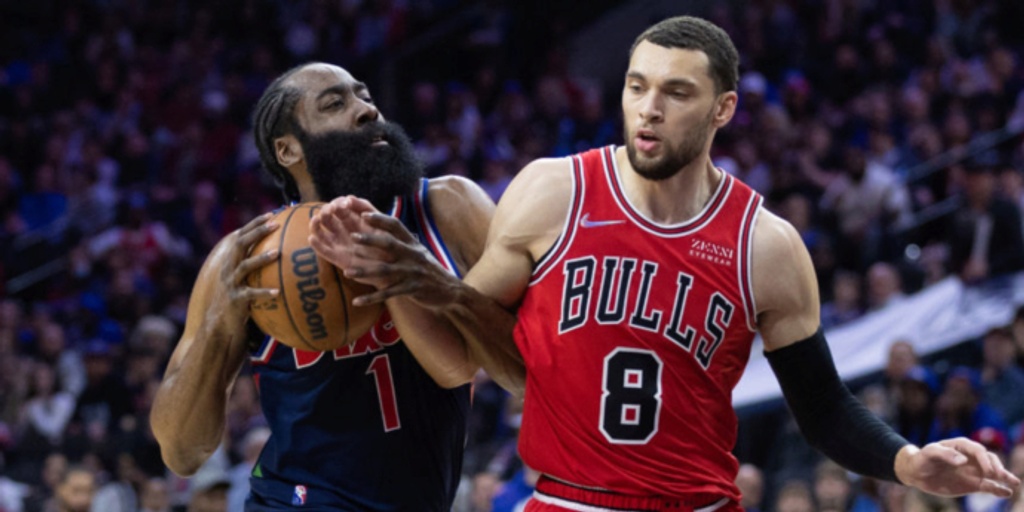 In particular, the crop of guards up for grabs is quite impressive, which is where we will begin this three-part ranking series.

James Harden holds a player option worth $47.4 million for the 2022-23 season, and it was reported that Harden would exercise it in conjunction with his trade from Brooklyn to Philadelphia. Although he hasn't done so yet, Harden has said he plans to. Over the summer, the maximum offer the Sixers can present to Harden is a pact that would pay him up north of $270 million over the next six years, which ESPN analyst Bobby Marks declared would be the "worst contract in NBA history." Here's a look at what Harden's annual salary would look like:

Zach LaVine bet on himself instead of signing a four-year, $105 million extension last offseason, and the gamble has most certainly paid off. He's averaging 24.6 points, 4.9 rebounds, 4.5 assists and 2.9 made three-pointers while shooting 40.0% from downtown and a career-high 85.7% from the free-throw line. Steph Curry is the only player in the NBA to match or exceed LaVine in those statistical categories this season. With LaVine playing at such a high level and the Bulls near the top of the Eastern Conference standings, Chicago is fully expected to offer him a max deal of five years at approximately $200 million. The most any other team can offer LaVine is around $160 million over four years.

The Wizards announced last month that Bradley Beal underwent surgery to repair a torn ligament in his left wrist. Prior to the injury, Beal's scoring average had dipped dramatically (from 31.3 points per game in 2020-21 to 23.2 this season), and he was shooting just 30.0% from downtown, but the three-time All-Star was averaging a career-high 6.6 assists. Beal's player option for the 2022-23 season is worth $36.4 million.

It's been a tumultuous season for both Kyrie Irving and the Nets. Kyrie's refusal to get vaccinated against COVID-19 — which resulted in him being banished from the team for the first half of the year before Brooklyn welcomed him back to play in road games — reportedly was an important factor in James Harden's decision to demand a trade. In the preseason, the Nets were heavy favorites to take home the title, but find themselves below .500 and in ninth place in the East. Brooklyn is just 1-9 in the last 10 games Irving has appeared in. Considering all the drama (and the reports that Irving would consider retirement if he was traded), it seems safe to assume Kyrie will remain in Brooklyn. But when it comes to Mr. Irving (who has a player option for the 2022–23 season worth $36,934,550), making assumptions often proves unwise. Stay tuned.

It could be argued that Anfernee Simons has increased his value more than any player in the league over the last five months. After averaging a modest 7.8 points per game last season, Simons is pouring in 17.3 points per game in 2021-22, which represents the largest year-over-year increase in the NBA this season. And his numbers are even more impressive dating back to the start of the New Year, when he was permanently inserted into the starting lineup.

If you're not taking notice of @anferneesimons yet, you should be! pic.twitter.com/5IPvZXFvyo

Over the 27 games he's appeared in since the calendar flipped to January, the 22-year-old Simons is averaging 23.4 points, 5.8 assists, 2.7 rebounds and 4.4 made triples, while shooting 42.3% from downtown and 86.6% from the charity stripe. Simons leads the league in made three-pointers (119) in 2022. Yes, he's struggled on the defensive end, but one of the primary reasons the Blazers made multiple major moves before the deadline (trading away CJ McCollum, Norman Powell and Robert Covington) was to clear up cap space to sign Simons to a considerable extension this summer. They are not going to let him walk.

After two solid, if unspectacular, seasons to start his NBA career, Jalen Brunson took a significant step forward last season; he averaged 12.6 points, 3.8 rebounds, 3.5 assists and 1.2 treys in 25.7 minutes per game, while shooting 52.3% from the floor and 40.5% from downtown. The Villanova product has continued to improve in 2021-22, posting career-highs in points (16.2), assists (5.3) and rebounds (3.7) per contest. Brunson also showed he could shoulder increased responsibility by stepping in and stepping up when Luka Doncic missed 14 of Dallas' first 35 games this season. Jalen played the best basketball of his NBA career over an eight-game stretch in mid-to-late December, when he averaged 22.4 points and 7.9 dimes a night. This offseason, Brunson reportedly will be seeking a four-year, $80 million deal. The New York Knicks are among the teams expected to express serious interest.

Collin Sexton injured his left knee in a game in early November, and an MRI revealed a torn meniscus. He had surgery a week later, sidelining him for the entirety of the 2021-22 campaign. It will be fascinating to see what offers he receives on the open market. Last season, Sexton averaged 24.3 points and 4.4 assists while shooting 47.5% from the floor, 37.5% from downtown and 81.5% from the free-throw line. However, he struggled defensively, and the Cavs registered a league-worst 60-159 record over the first three years of his career. With Sexton out of action this season, Cleveland is 10 games above .500. Because he is restricted, the Cavs can match any offer he receives this summer.

Mailk Monk, the 11th overall pick in the 2017 NBA Draft, failed to live up to expectations over the first four years of his career in Charlotte. He made just one career start as a member of the Hornets, and had averaged 9.1 points, 2.0 rebounds and 1.8 assists in 233 appearances while shooting below 34% from downtown. As a result, the Los Angeles Lakers were able to ink him to a one-year contract at the veteran minimum ($1.7 million) for this season. Surprisingly, Monk has established himself as one of the Lakers' most consistent and effective players. In the 23 games he's started for L.A., Monk has averaged 17.0 points, 4.0 rebounds, 3.3 assists while posting a True Shooting percentage of 58.8%. He will look to cash in with a significant pay raise in July.

Besides Monk's unexpected success and the MVP-caliber performance of the ageless wonder that is LeBron James, the 2021-22 Lakers season has been an absolute nightmare. L.A. is eight games below .500 and desperately fighting just to make the Play-In Tournament. And Russell Westbrook is the player the public has pilloried and pinned the Lakers' failures on. Russ has a player option for the 2022-23 season worth a whopping $47,063,478, so there is almost zero chance of him opting out. The Lakers will undoubtedly explore all possible trade scenarios this offseason.

John Wall showed flashes of his immense talent last season, when he averaged 20.6 points and 6.9 assists per game for the Rockets, but he hasn't set foot on an NBA court since April 2021. Wall will almost certainly exercise his player option for 2022-23 worth $47.4 million. At that point, he'll be on an expiring contract, which will make it far easier for Houston to move him.