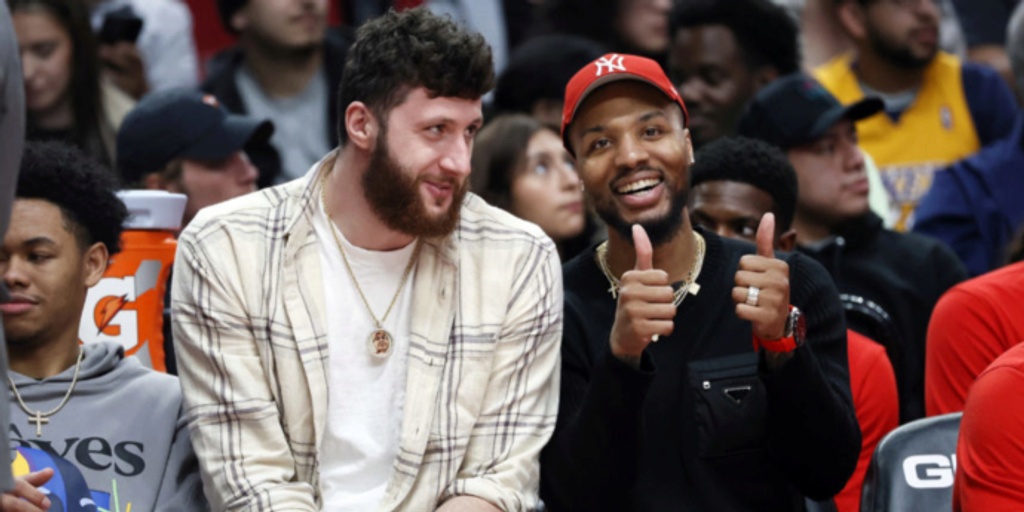 The Trail Blazers' season started with Damian Lillard declaring his faith the team would be competitive. It ended with him on the bench in street clothes, watching as Portland lost its 11th straight game.

With a spate of injuries, a new coach, a front-office shakeup and a roster overhaul, the Blazers' turbulent season was less about the present and more about rebuilding for the future.

Portland heads into the offseason with at least one lottery pick and cap space, armed with a plan to build around six-time All-Star Lillard. He made a promise to fans at the Moda Center for the team's final game.

“This year a lot of things came up that we didn’t expect. A lot of hard times. But you guys continue to show up. Continue to show us love. Continue to be the fans that I’ve always known," he said. "And I just need y’all to know one thing: This will not continue. Next year we’re gonna come back better than we’ve been.”

It was a far cry from the start of the season, when Lillard flashed his Olympic gold medal and said: “I think over the years we’ve always had a competitive team, I think we’ll be competitive again.”

The Blazers finished 27-55, their worst season since 2005-06 when they won just 21 games. Clearly eying draft position after the NBA trade deadline, 11 of Portland's losses following the All-Star break were by more than 30 points.

Over the course of the season the Blazers used 34 different starting lineups, winding up at 13th in the Western Conference.

“It's not been a season that any of us expected, but the way that I kind of see it in all honesty, this year has kind of been like a real microcosm of life. You have these great ideas and plans and thoughts, and then things happen and you have to pivot," said first-year Portland coach Chauncey Billups. "And then it becomes about how you pivot, and what you do.”

Lillard was the most significant of the Blazers' injuries this season. He played in just 29 games, the result of a nagging abdominal injury that required surgery in January.

Backcourt partner CJ McCollum missed 17 games with a collapsed lung. Others who missed significant time included Nassir Little, who sustained a labral tear in his left shoulder in late January and missed the rest of the season; Jusuf Nurkic, shut down for the final 22 games of the season with plantar fasciitis; and Larry Nance Jr., who missed 17 games with right knee inflammation before he was traded.

And that's not to mention the games missed because of COVID-19 protocols.

SHAKEUPS AT THE TOP

Billups was hired in the offseason as the team's new coach, replacing Terry Stotts, who had led the team to playoff appearances in the past eight seasons. Billups had limited experience with just one season as an assistant NBA coach.

Blazers President and CEO Chris Magowan stepped down in November and was replaced by Dewayne Hankins, a team vice president and chief commercial officer.

General manager Neil Olshey was then dismissed by Portland in December following an outside investigation into concerns about workplace environment. Joe Cronin, an assistant GM, was promoted to fill the role on an interim basis.

SHAKEUPS ON THE COURT

The Blazers made a flurry of multiplayer deals before the February deadline. Five Blazers who played in the team’s opener against Sacramento were no longer with the team, including three starters.

The most significant of the deals involved McCollum, who had been drafted by the Blazers in 2013 and formed a close bond with Lillard. He was sent to the New Orleans Pelicans along with Nance and Tony Snell.

Portland also traded Norman Powell and Robert Covington to the Los Angeles Clippers for Eric Bledsoe, Justise Winslow, rookie Keon Johnson and a second-round pick in 2025. The day before the deadline, the Blazers acquired injured forward Joe Ingles in a three-team trade with Utah and San Antonio.

The one bright spot in an otherwise forgettable season was the rise of guard Anfernee Simons.

Simons took advantage of the opportunity when Lillard was injured. After taking over as starter, he averaged 23.4 points and 5.8 assists.

Just 22, he scored a career-high 43 points on Jan. 3 against Atlanta, making him the youngest Trail Blazer ever to have a 40-point game. On Feb. 14 in Milwaukee, he had seven 3-pointers, and he finished with 18 games with five-plus 3s.

The Blazers also shut him down for the final stretch of the season. He missed the final 17 games with left knee patellar tendinopathy.