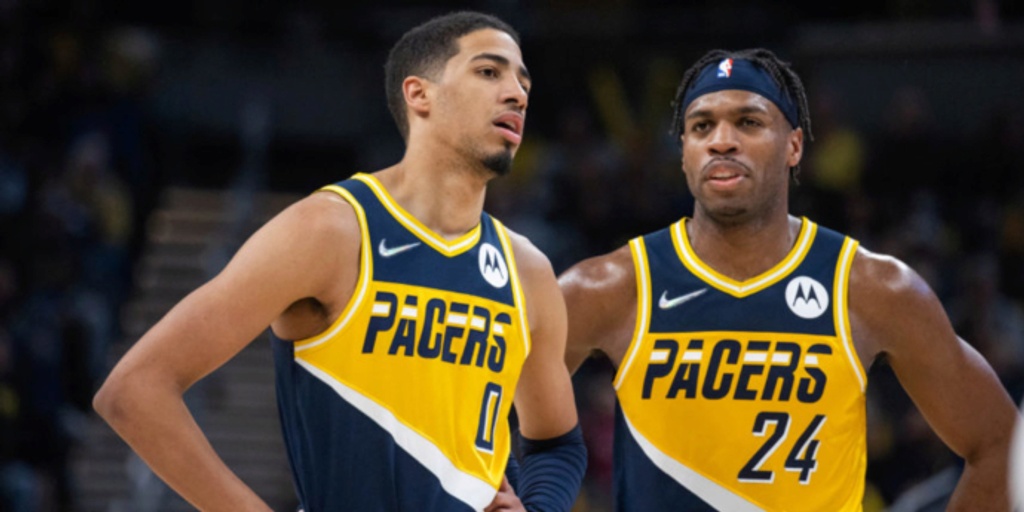 It's time for a shakeup.

After posting a second straight losing record at home, missing the playoffs for the first time in seven years and recording their fewest wins in a season since 1984-85, the Pacers are embarking on their biggest offseason overhaul in years.

A three-trade flurry in February culminated in sending two-time All-Star Domantas Sabonis to Sacramento and Caris LeVert, widely considered one of Pritchard’s cornerstone pieces, to the Cavaliers.

“This franchise, right now, is in one of the most exciting positions it could possibly be with the potential for a top-five pick and the potential to possibly have Cleveland’s (first-round) pick," coach Rick Carlisle said, noting Indiana also holds Houston's early second-round pick. “We’re going to get it right in the draft, and we’re going to have a great summer, and next year’s going to be an exciting year.”

Things certainly can't get much worse than they did this past season.

Injuries again derailed the Pacers' postseason plans as Carlisle won just 25 games in the first year of his second tenure with the team. Lengthy absences of guards Malcolm Brogdon and T.J. McConnell, forward T.J. Warren and center Myles Turner — all projected to be key rotational players — prompted Pritchard to pull the plug and start dealing.

The new plan is to build around point guard Tyrese Halburton. Indiana views the 22-year-old as a budding star, capable of ending its long quest to find a playmaking ball-handler.

“I’m especially excited about playing with Tyrese, just the way he came in here and made an impact on our organization, on our fans and on the guys around him," Turner said Monday. “He makes everybody better."

What else did the Pacers learn from mixing, matching and experimenting with lineups over the final 26 games?

Buddy Hield, who came over from Sacramento with Haliburton, and Jalen Smith, who arrived in a trade with Phoenix, also were solid players. Rookie center Isaiah Jackson provides a different kind of post presence and rookie guard Chris Duarte became one of Indiana's most consistent players until an injured toe sidelined him.

This summer could be equally busy as Pritchard tries to put the Pacers back in playoff position.

“I think first we've got to get healthy, that's obvious and then it'll be up to the front office what pieces they add, what pieces they trade,” Brogdon said. “When you make a move like we did, a monumental move in the middle of the season, I think there are other moves that follow and I think we'll be seeing that this summer.”

Brogdon and Turner would be the most attractive trade candidates. Both are proven veterans, capable of helping a playoff team become a title contender and both are on expiring contracts. Brogdon counts $22.6 million against the salary cap while Turner, a two-time blocked shots champ, would be an $18 million cap hit. The Pacers could be looking to add more draft picks, free up cap space for free agency or add veterans.

The Pacers thought they'd definitely have two first-rounders when they got the Cavs' lottery-protected pick two months ago. But a late-season swoon has jeopardized that possibility. Cleveland finished eighth in the Eastern Conference and now needs to win one game to make the playoffs. Two losses would mean they'll keep the pick, preventing the Pacers from having three of the top 35 picks in June.

Fan favorite Lance Stephenson provided a second-half spark on and off the court for Indiana. While it seems unlikley Indiana would keep the soon-to-be 32-year-old on a young team building for the future, Stephenson isn't ready to end his career.

“I'm just trying to keep my body strong and sharp," he said. "I'm just mad that the season is over because I feel great right now, I feel like I can keep going."