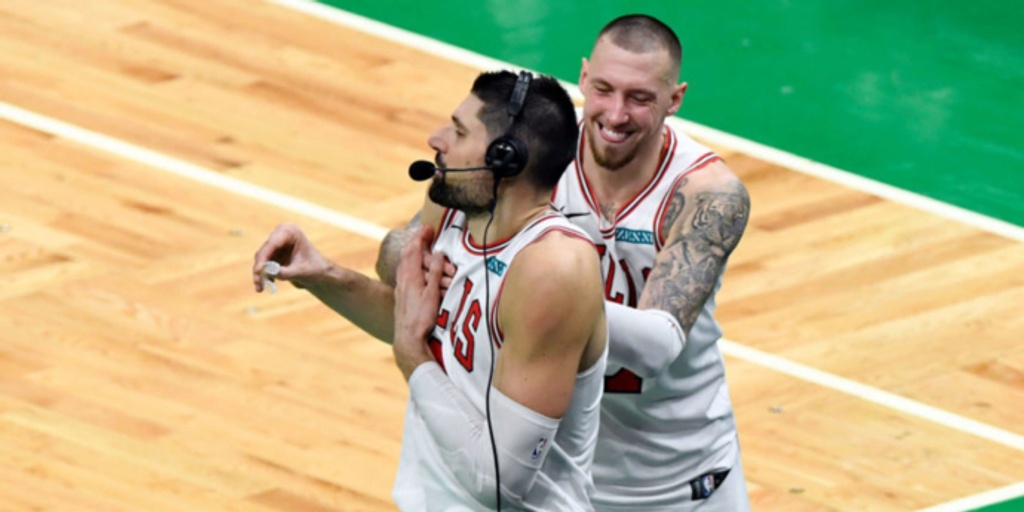 The Bulls have a difficult road to travel if they want to secure a spot in the playoffs.

But they feel like replicating their defensive effort from the past two games might be the thing that helps them get there.

Nikola Vucevic had 29 points and nine rebounds, and the Chicago held off the Boston Celtics 102-96 on Monday night.

Coby White added 19 points and seven assists to help the Bulls snap Boston’s season-high six-game winning streak. Chicago has won its last two since a five-game skid to nudge in front of Toronto for 10th place in the Eastern Conference standings. Both wins have come without guard Zach LaVine, who remained in the health and safety protocols for the third straight game.

“We’re in a fight for our lives,” said Bulls guard Garrett Temple. “Every detail, every play matters. Guys are playing really hard, and I like that.”

What coach Billy Donovan liked best is how his team is competing on the defensive end, holding each of its last two opponents under 100 points.

“We shot the ball really poorly in the first half. But of defense kept us in it," Donovan said. "Once the ball started going in the basket, it was nice to see us maintain that defensive intensity, really the entire game.”

Boston led by 12 in second quarter but struggled to execute down the stretch and finished with 17 turnovers.

“It was pretty consistent, the turnovers,” Celtics coach Brad Stevens said. “I go back to their length, their physicality. We tried to draw some fouls in there, but to their credit they played physical. They played solid.”

Jaylen Brown had 23 points. Jayson Tatum posted the first triple-double of his career with 14 points, 13 rebounds and 10 assists. But he was just 3-of-17 from field.

“It was a tough night,” Tatum said.

The Bulls missed their first five shots of the game and fell into an early hole.

They got back in the game in the third quarter, closing the period a 24-10 run and taking a 74-66 lead to the fourth.

Boston didn’t go away, and Brown tied the game at 90 with a 3-pointer with 3:25 remaining.

But Chicago then pushed back in front 96-90, taking advantage of a pair of Celtics’ empty possessions.

Tremont Waters got Boston within 96-94 on a layup with 16.5 seconds left. The Celtics fouled and White pushed the lead back up to 98-94 with a pair of free throws.

Two free throws by Tatum but it to 98-96. But after White was fouled again, he calmly sank two more free throws.

Vucevic scored 17 in the first half to keep the Bulls within striking distance.

White said it was easy to run the offense through the All-Star once he got going.

“Vooch is a bucket getter," White said. "You gotta play off a guy that talented.”

Bulls: Daniel Theis, who was dealt by Boston at the trade deadline, finished with six points, six rebounds and four assists in his first matchup against his former team. … Chicago scored 16 points of Boston turnovers.

Celtics: Celtics hit their first four shots, taking a 9-0 lead. … Brown scored 13 of Boston’s first 21 points. ... Stevens said Williams, who also sat out Saturday, could be available for their matchup with Phoenix on Thursday. Fournier is expected to have a final test before being removed from health and safety protocols list sometime this week.

According to Elias Sports Bureau, Tatum (23 years, 47 days) is the second-youngest Celtics player in franchise history to record a triple-double,. The youngest was Marcus Smart (21 years, 315 days) on Jan. 15, 2016 against Phoenix.