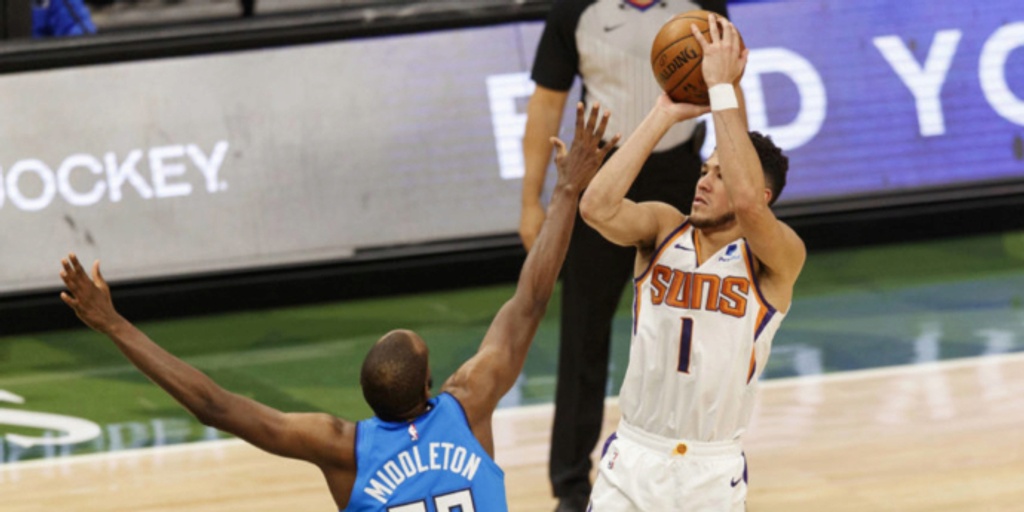 Devin Booker made a free throw with 0.3 seconds left after getting fouled on a jump shot to give the Phoenix Suns a 128-127 overtime victory over the Milwaukee Bucks on Monday night.

After Khris Middleton had tied the game on a 3-pointer with 22.1 seconds left, Jae Crowder inbounded a pass to Booker, who attempted to get free for a shot while getting hounded by Jrue Holiday.

As Booker finally put up a shot from in front of Phoenix’s bench just before the buzzer, P.J. Tucker also approached him. Tucker was called for the foul.

Booker made the first free throw for his 24th point of the night amid a chorus of boos from the Milwaukee crowd. Booker missed the second shot, but the buzzer went off before the Bucks could put up any kind of shot.

The @Suns All-Star duo take OVER in the OT dub! 🤩

Chris Paul had 22 points, 13 assists and seven rebounds for the Suns, who were opening a five-game trip in which they play five of the top six teams in the Eastern Conference standings.

Mikal Bridges had 21 points and DeAndre Ayton scored 20 to help the Suns rally from a nine-point, fourth-quarter deficit.

Giannis Antetokounmpo had 33 points, Middleton 26 and Holiday 25 for the Bucks, who have lost five straight home games.

The Suns scored the first six points in overtime, but the Bucks tied it with 1:17 left thanks to 3-pointers from Pat Connaughton and Tucker.

Paul and Middleton exchanged baskets on the next two possessions. Bridges hit a corner 3-pointer to put Phoenix in front with 25 seconds remaining, but Middleton answered by sinking a 3-pointer from behind the free throw line.

Suns: This game marked Torrey Craig’s return to Milwaukee, where he briefly played this season and struggled to carve out a niche. The 6-foot-7 forward has gained more of a role with the Suns, who acquired him from the Bucks for cash on March 18. Craig had five points and five rebounds in 14 minutes.

Bucks: Donte DiVincenzo returned to the starting lineup after missing two games with a sprained right toe. He scored nine points in 31 minutes.

Suns: Visit the Eastern Conference-leading Philadelphia 76ers on Wednesday as they continue this five-game trip. The Suns beat the 76ers 120-111 in Phoenix on Feb. 13.

Bucks: Have the first of two straight home matchups with 76ers on Thursday. In their lone previous meeting this season, the Bucks won 109-105 in overtime at Philadelphia on March 17.