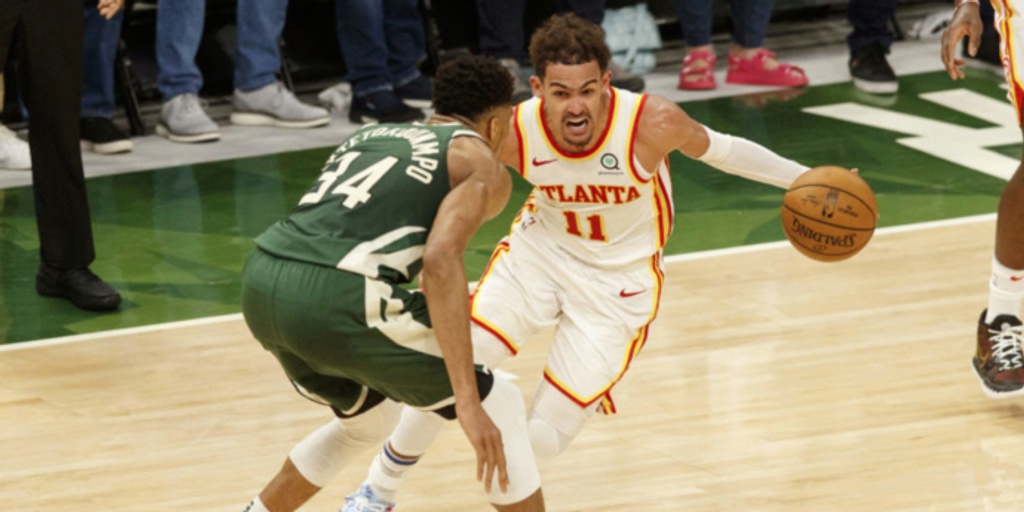 ATLANTA (AP) — It has become a familiar holding pattern in the Eastern Conference Finals.

The wait to see who's going to play.

Nothing has changed with the series headed back to Atlanta for a potentially clinching Game 6 on Saturday night between the Hawks and the Milwaukee Bucks.

Milwaukee is up 3-2 and can lock up its first trip to the NBA Finals since 1974.

The Hawks, who haven't made it to the final round since their days in St. Louis, are hoping to force the series back to Wisconsin for a decisive Game 7 on Monday night.

The Phoenix Suns have already locked up the Western Conference crown and are awaiting the Milwaukee-Atlanta winner.

How it all plays out could come down the medical report.

Hawks star Trae Young has missed two-straight games with a bone bruise in his right foot since a freak accident on last Sunday, when he stepped on an official's foot along the sideline.

The Bucks took the court in Game 5 without their best player, two-time MVP Giannis Antetokounmpo, who was sidelined by a hyperextended left knee.

The status of both players may not be known until shortly before tip-off at State Farm Arena, though Antetokounmpo is unlikely to play after the Bucks listed him as doubtful on their injury report.

The Hawks said Young is questionable — the same status he was given before the last two games.

“I have nothing for you,” Atlanta coach Nate McMillan said Friday during a Zoom call with the media.

Both teams have shown they can win without their most prominent players.

The Hawks led from start to finish in a 22-point romp in Game 4, though it must be noted Milwaukee was showing signs of a comeback until Antetokounmpo went down in third quarter, landing awkwardly after a futile attempt to block Clint Capela's dunk.

With Young and Antetokounmpo both sidelined in Game 5, the Bucks returned the favor with a wire-to-wire victory after racing to a 20-point lead in the opening quarter.

“If Trae could play, he would be out there,” the coach said. "It's both the medical (staff) and Trae giving us feedback as far as him being able to play in the game. It's not anything that's long term. It's just he has pain that is not comfortable enough for him to get out there and feel like he can help the team.”

This has become a series of unlikely leaders.

Longtime NBA sixth man Lou Williams has gotten the first two playoff starts of his 16-year career filling in for Young, doing an admirable job at the point while averaging 19 points in  more than 35 minutes of playing time.

Bobby Portis was stellar in his first-career playoff start on Thursday, doing a spot-on impression of Antetokounmpo with 22 points, eight rebounds, three steals and three assists.

“I was just trying to stay locked in,” Portis said. “Knowing that Giannis went down, we had to step up. I think that’s what makes the game that much better — when you have to stay locked in and stay in the moment and be ready.”

Portis, who signed with the Bucks as a free agent last November, seems to have finally found his niche after struggling on losing teams much of his career.

“I just kept working and knew my time would come,” he said. “I always just believe if you do the things the right way and you do right, it always comes back around. The cream always rises to the top. I just tried to stay in the moment and be a team guy, and I give all the credit to my teammates and coach for just trusting me.”

McMillan is concerned about the way his team was pushed around on the inside by Portis and the Bucks.

Milwaukee had a staggering 28 points in the paint in the first quarter of Game 5, setting a tone that propelled the home team to a 123-112 victory.

“I don't have an answer for that. That's just not defending at all,” McMillan said. “I'm telling the guys that we're being the (punching) bag. They're hitting the bag every single time. We need to switch that around. We need to hit first.”

If the Hawks can punch back in Game 6, it's not unfathomable that they could pull out the series back in Milwaukee.

They clinched their first two series victories on the road, including a Game 7 triumph at top-seeded Philadelphia. They also won Game 1 on the Bucks' home court.

“We know what we have to do,” McMillan said. “It's just a matter of going out and doing it.”