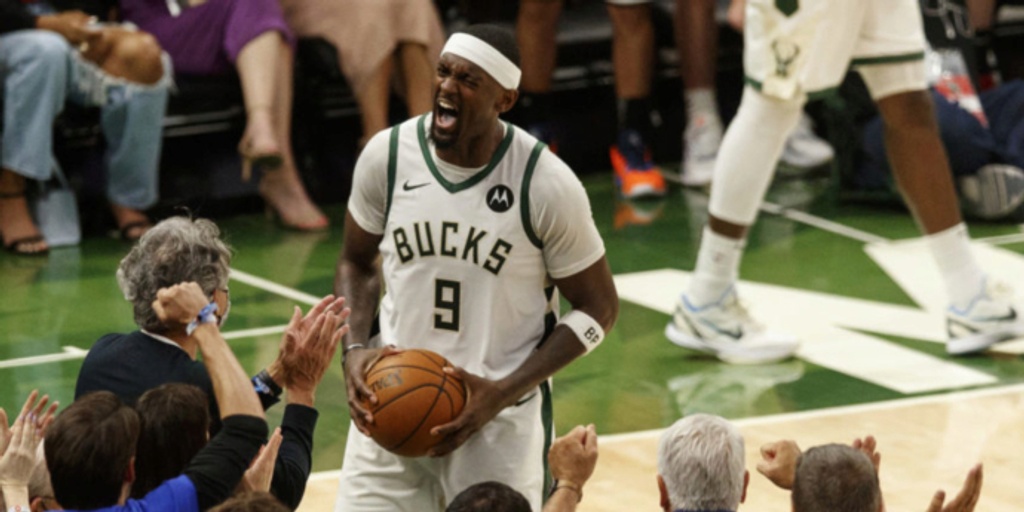 Bobby Portis says he turned down more lucrative offers to sign with the Milwaukee Bucks in the offseason because he wanted to play for a winner and experience a deep playoff run.

The reassurance that he made the right decision came every time a frenzied Fiserv Forum crowd chanted his name Thursday night.

Through the first five seasons of his career, Portis appeared in only one playoff series. Now he's a win away from the NBA Finals.

“Coming here was one of the best decisions for my career,” Portis said.

(Editor's Note: Spencer Davies profiled Bobby Portis and how he was Milwaukee's spark plug earlier this season, and Alex Kennedy had Portis on his podcast to talk about more of the same.)

Portis took injured two-time MVP Giannis Antetokounmpo’s spot in the starting lineup and scored 22 points in a 123-112 Game 5 victory over the Atlanta Hawks. That gave Milwaukee a 3-2 lead in the Eastern Conference finals.

With every big play Portis made, the chants of “Bobby! Bobby!” grew louder. Portis had a simple explanation for why he’s become such a fan favorite his first year in Milwaukee.

This has been an immensely satisfying season for Portis after he didn’t experience much winning earlier in his career with the Chicago Bulls, Washington Wizards and New York Knicks. His only previous postseason experience was Chicago’s first-round loss to Boston in 2017.

“When you first come to the NBA, you don’t really understand the journey,” Portis said. “You just come from college. I was the best player on my team, (Southeastern Conference) player of the year, All-American, All-American high school, so when I first got to the league, I wasn’t playing a lot. Didn’t really understand and kind of lost myself a little bit, but I fought my way in.”

Portis said a turning point came last year. He was playing for the New York Knicks when the pandemic shut things down. When the season finally resumed, the Knicks didn’t get to the Walt Disney World bubble because they were too far out of the playoff picture.

He spent more time with his mother and worked on his game but acknowledged that it hurt not being a part of that playoff setup. It made him that much more eager to play for a contender.

“I finally found peace, man,” Portis said. “I’m at peace with myself and at peace in my life and at peace with everything going on around. I was just always trying to find it again, and really couldn’t find it. But having great teammates and great coaches. And the pandemic, like I said, really helped me find out more about myself more than anything.”

Portis averaged 11.4 points and 7.1 rebounds during the regular season as a key player off the bench. He’d put up bigger numbers earlier in his career, but this time his contributions meant more because he was playing for a contender.

He had eight rebounds, three steals, three assists and numerous hustle plays to move the Bucks a giant step closer to their first NBA Finals appearance since 1974.

“More than anything, it’s the intensity, his passion for the game,” Hawks forward John Collins said. “He plays the game hard and gives the team spark and energy.”

Portis’ emergence in this series is somewhat surprising because he didn’t play at all in the final three games of Milwaukee’s second-round series with Brooklyn.

But he has become a major factor against Atlanta, averaging 12.6 points. The “Bobby” chants started in Game 2. They got louder and more frequent Thursday.

His teammates back that up.

“He brings this energy that nobody else could bring,” guard Jrue Holiday said. “It doesn’t matter how he’s playing, but he’s going to muck it up, he’s going to fight, he’s going to talk, and everybody loves when somebody talks. He knows that we got his back.”

Portis figures to stay in the Bucks’ starting lineup until Antetokounmpo returns from a hyperextended left knee. The guy who was stuck at home for the postseason last year could find himself starting in an NBA Finals game later this month.

“The journey is what makes it sweet, man, in the NBA,” Portis said. “You really can’t put a tab on that. Coming here, man, was the best decision, like I said, of my career.”