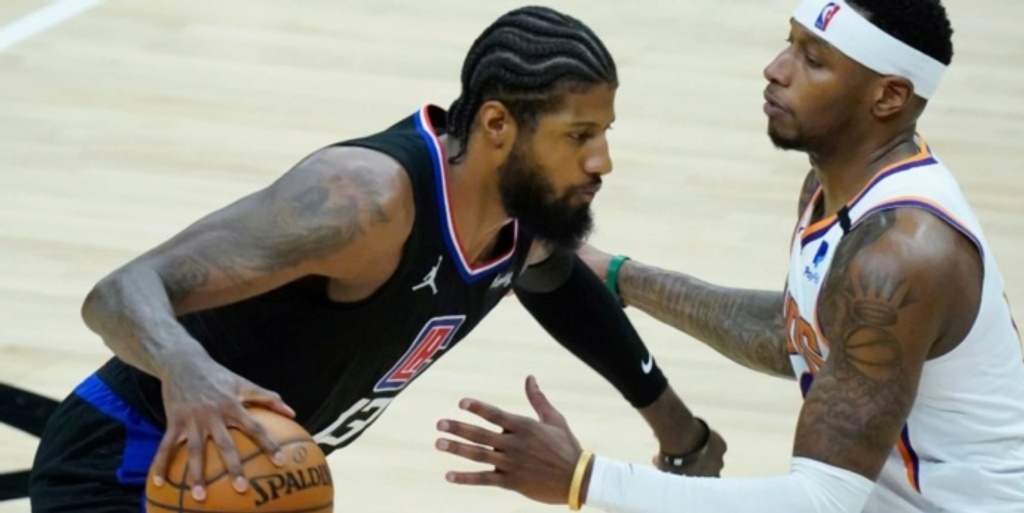 LOS ANGELES (AP) — Paul George scored 33 points, Kawhi Leonard added 27 and the Los Angeles Clippers beat the Phoenix Suns 113-103 on Thursday night in a matchup of two of the top teams in the Western Conference.

George was 7 of 9 from 3-point range in 30 minutes in his eighth 30-point game of the season. His season high of 39 points was against Phoenix on Jan. 3. The Clippers made 18 3-pointers, which is the 12th time this season they have made 18 or more in a game.

Leonard scored 19 points in the second half to help the Clippers end of the Suns' winning streak at seven. Los Angeles trailed 67-61 with eight minutes remaining in the third quarter before coming back with an 8-2 run to tie it.

LA led 83-81 at the end of the third quarter before opening the fourth with a 10-2 run to seize control. Its largest lead was 16 points late in the fourth.

Rajon Rondo, who was acquired from Atlanta near the deadline, added 15 points for the Clippers, who are 5-2 during a season-long, nine-game homestand. Even more important, they are assured of taking the season series from the Suns, which would give them a key tiebreaker if both teams would tie at the end of the regular season.

Phoenix, which was coming off a big overtime victory over NBA-leading Utah on Wednesday night, didn't have enough down the stretch. Devin Booker led the way with 24 points, and Mikal Bridges had 20.

Clippers guard Patrick Beverley was ejected with 7:01 remaining for a Flagrant 2 foul against Chris Paul.

Replay determined that Beverley's shoulder check and extended elbow against Chris Paul on a fast break was an unnecessarily hard and excessive foul.

Marcus Morris Sr. was ejected late after picking up a pair of technical fouls in the fourth quarter.

Suns: The Suns are 9-3 this season when playing on the second night of a back-to-back.

Clippers: LA has won 13 straight over the Suns at Staples Center. ... DeMarcus Cousins played eight minutes in his LA debut on Tuesday, but did not see action Thursday.

Suns: Host Washington on Saturday to start a five-game homestand.