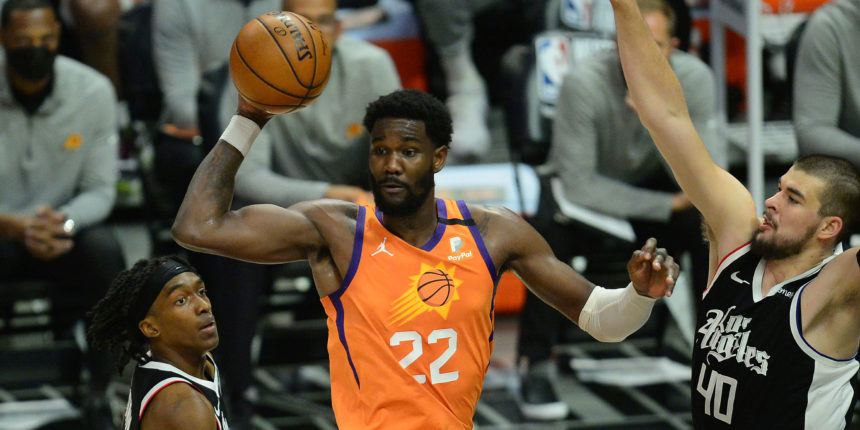 Deandre Ayton's emergence has Suns a win from the NBA Finals

Deandre Ayton is rapidly becoming the player the Phoenix Suns imagined when the ping-pong balls bounced their way for the 2018 NBA draft.

The third-year center was in top form Saturday in a hard-fought 84-80 Game 4 win over the Los Angeles Clippers. He scored 19 points, grabbed a playoff career-high 22 rebounds, blocked four shots, and was generally the only person on the floor who could put the ball in the basket with any kind of consistency.

Now the Suns have a 3-1 lead in the Western Conference finals and are one win from a trip to the NBA Finals for the first time since 1993.

Game 5 is on Monday in Phoenix.

“I thought Deandre’s presence, his effort, the rebounding, shot blocking, his communication on defense, switching out on smaller guys and being able to guard them, he was the catalyst on the defensive end,” Suns coach Monty Williams said. “I thought it was an unreal performance from him. Our guys rallied around him.”

Williams added of Ayton: “Every possession he's playing like his life depends on it.”

There have certainly been some growing pains for the No. 1 overall pick out of Arizona. His rookie year was decent, though his effort on the defensive end was sometimes inconsistent. His second year was marred by a 25-game suspension for violating the league's Anti-Drug policy after testing positive for a diuretic.

It was easy to wonder if the Suns had made the right choice.

Now there's not much concern. The 22-year-old has already had one of the iconic moments in Suns playoff basketball history when he dunked an alley-oop pass from Jae Crowder with 0.7 seconds left to win Game 2 last week.

It was another example of Ayton's newfound confidence and tenacity.

“I learned I could keep going,” Ayton said. “There’s another level — I learned that. I think I reached the next level that I really need to be at, at this level when it comes to competing.”

There's little doubt that the Clippers have missed the presence of Kawhi Leonard. The All-Star forward has missed six straight games due to a sprained right knee after he averaged 30.4 points in the postseason.

Clippers coach Tyronn Lue said Leonard would remain in Los Angeles while Game 5 is played in Phoenix. Lue hasn't given much clue as to when — or if — Leonard might return during the postseason.

Chris Paul's return after missing two games in the league's COVID-19 protocol was supposed to be a big boost for the Suns' offense.

Devin Booker hasn't been as productive since his broken nose suffered on a head-to-head collision with LA's Patrick Beverley in Game 2. Booker wore a plastic mask over his face in Game 3 and part of Game 4 before ditching it after he missed a layup.

“I didn't think the shots were bad yesterday," Williams said. “We just had so many shots go in and out, in and out. I don't know if I've ever seen that many in a game. I think both those guys — they've got multiple defenders on them, they're being blitzed at times, they're being switched onto. It's the playoffs.”

Williams said the Suns' intense defense has allowed them to take a 3-1 lead. But he knows a few shots need to drop, too.

Without Leonard in the lineup, Clippers forward Paul George has had a huge role in the offense. He's averaging 27.5 points, 10.3 rebounds and 6.3 assists through four games in the Western Conference finals.

The problem is George is needing a lot of shots to get to those numbers. He's shooting just 36% from the field, 28% from 3-point range and 70% from the free throw line, including a few late-game misses that have been crucial.

George was just 5 of 20 from the field in Game 4, including 1 of 9 from 3-point range. Fatigue could be a problem: George is playing more than 41 minutes per game in this series.

“You know, it’s just what it is. I feel good," George said. "Not going to let that be an excuse or have something to fall back on. I feel good. When I’m out there, I feel good.”