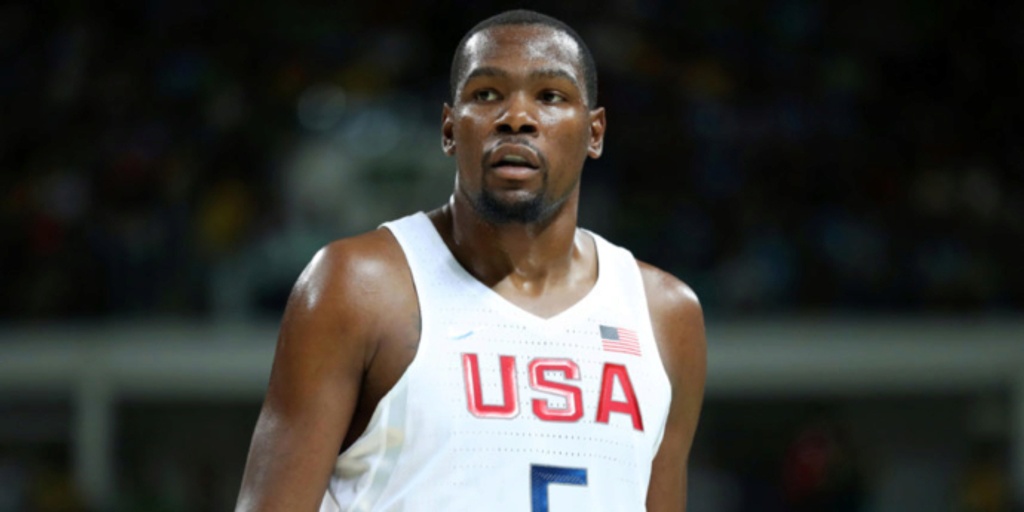 “I’m happy for the selected players and looking forward to having the opportunity to work with this wonderful group when practice gets underway on July 6 in Las Vegas,” said Popovich. “I’m excited to represent the United States in our quest to earn a gold medal in Tokyo.”

The U.S. Olympic Men’s Basketball Team was approved by the USA Basketball Board of Directors and is pending final approval by the United States Olympic & Paralympic Committee.

“We are excited about the 12 players who have been selected to represent the United States in the Tokyo Olympics,” said Colangelo, who has served as managing director of the USA Men’s National Team since 2005. “This was an unusually challenging selection process for many reasons, including the year postponement of the Olympics and the issues related to the timing of the NBA regular season and playoffs.

“Our roster features players who are experienced in the international game, and this team has outstanding athleticism, versatility and balance. We also believe we have excellent leadership which is a necessity in order to develop the needed chemistry. We still have a lot of challenges in front of us, but I believe these players will become a team that all Americans will be proud of.”

“USA Basketball selects players to represent our country in international competition with the skills, character, experience, and desire to win,” said retired Gen. Martin Dempsey, chairman of the USA Basketball Board of Directors.. “We build teams that are versatile and resilient in the short, intense competitions we face. We’re fortunate that this group of elite athletes has volunteered to represent us in Tokyo this summer.”

Durant, who also collected MVP honors in leading the USA to gold at the 2010 FIBA World Cup, has finished as the U.S. team’s leading scorer the past two Olympics – the 2012 London Olympics and the 2016 Rio Olympics. Owning the top two U.S. Olympic scoring marks (156 points in 2012 and 155 points in 2016), Durant has 16 career Olympic games under his belt and with 311 total points in Olympic games (19.4 ppg.), ranks second all-time for points scored,trailing only Anthony (336) by 25 points.

The U.S. men have collected a medal in all 18 Olympics in which they have competed, including 15 gold medals, one silver and two bronze medals. The American men own an impressive 138-5 (.965 winning percentage) all-time record in Olympic action. Since NBA players began representing the United States in 1992, the USA is 53-3 in seven Olympics, capturing six gold medals and one bronze medal. The USA currently enjoys a 25-game Olympic win streak that dates back to the bronze medal game of the 2004 Athens Olympics.

The rescheduled Summer Olympic Games are being held July 23-Aug. 8 in Tokyo, Japan. Twelve nations will compete in the Olympic men’s basketball competition that will be held at the Saitama Super Arena. In addition to host Japan, nations qualified for the Tokyo Olympics men's basketball competition include Argentina, Australia, France, Iran, Nigeria, Spain and the United States.

The final four teams for the Tokyo Olympics will qualify through four FIBA Olympic Qualifying Tournaments. Twenty-four teams will compete in the four men's FIBA Olympic Qualifying Tournaments, which will be held from June 29-July 4, in Victoria, Canada; Split, Croatia; Kaunas, Lithuania; and Belgrade, Serbia. The winner of each qualifying tournament will qualify for the Tokyo Olympic Games.

Men’s basketball preliminary play at the Olympics, which will see the 12 teams divided into three groups of four teams each, will be held July 25-Aug. 2. The quarterfinals, featuring teams placed first and second in each preliminary group and the two best third-placed teams, is scheduled for Aug. 3. Semifinal action will be played on Aug. 5. The gold and bronze medal games are scheduled for Aug. 7.

A draw will take place following the conclusion of the group phase to determine the pairings of the quarterfinals. The winners of the groups and the second-placed team with the best result from the Group Phase are placed in one pot (D), while the two remaining second-placed teams and two best third-placed teams in another pot (E). Teams from the same group in the Group Phase cannot be drawn against each other in the quarterfinals. This stage of the competition is played in a knockout format, and the draw will produce an Olympic bracket for the road to the gold medal.

To be crowned Olympic champion in 2021, a team has to play six games - three in the group phase and three in the Final Phase (quarterfinals, semifinals, gold medal game), instead of eight games as in past Olympics. 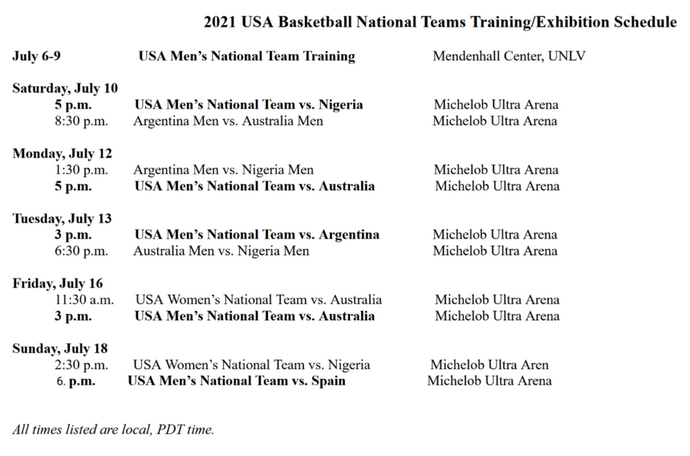 Based in Colorado Springs, Colorado USA Basketball is a nonprofit organization and the national governing body for basketball in the United States. As the recognized governing body for basketball in the U.S. by the International Basketball Federation (FIBA) and the United States Olympic & Paralympic Committee (USOPC), USA Basketball is responsible for the selection, training and fielding of USA national teams that compete in FIBA-sponsored five-on-five, 3x3 and esport international competitions, as well as for some national competitions and for the development of youth basketball initiative that address player development, coach education and safety, while promoting, growing and elevating the game.