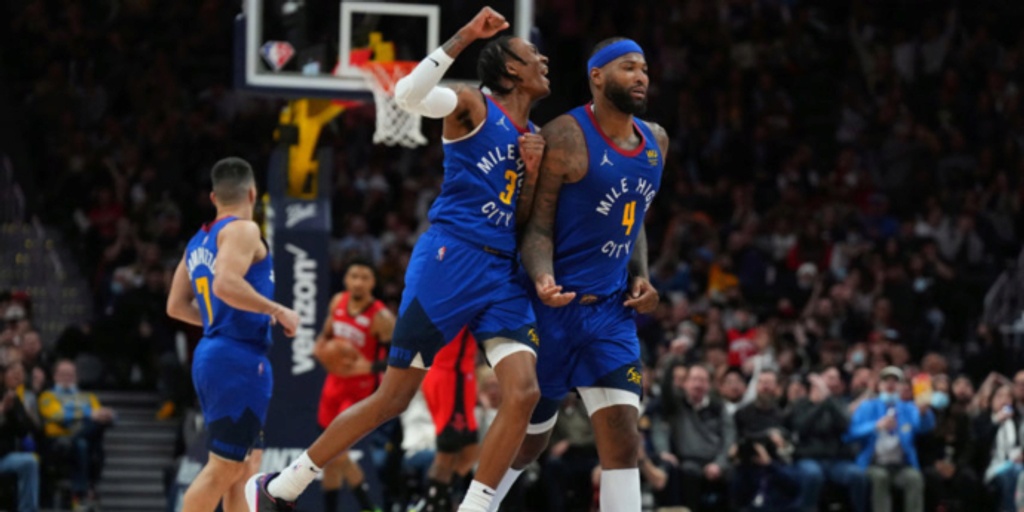 DeMarcus Cousins, starting in place of ailing Nikola Jokic, scored a season-high 31 points and the Denver Nuggets bounced back from a loss to beat the struggling Houston Rockets 116-101 on Friday night.

Jokic, the reigning MVP, was held out because of a non-COVID-19 illness.

Cousins, a midseason acquisition by the Nuggets following his release by Milwaukee, found out he was starting for Jokic during the pre-game shootaround.

“I was trying to take the best shots, trying to make the right play every possession,” Cousins said. “I play the game the right way. It was very satisfying and it’s even better when you have a coach that believes in you, an organization that believes in you and teammates that have your back. That’s all I’ve been searching for on this journey. I’ve found that right now and like I said earlier, I’m going to leave everything on the floor.”

JaMychal Green and Jeff Green each added 14 points apiece as Denver shook off a loss to Oklahoma City on Wednesday night for its seventh win in eight games.

Will Barton had 11 points, hitting two 3-pointers to pass JR Smith as the Nuggets’ career leader with 769.

Christian Wood had 22 points for Houston, and Jalen Green added 18. The Rockets have lost 12 straight.

Barton hit two 3-pointers a minute apart late in the third quarter to break the mark. The Nuggets called a timeout during their ensuing possession and Barton’s milestone was flashed on the scoreboard, bringing the crowd to its feet with a roaring ovation that Barton acknowledged with an appreciative wave of his arms.

“It was a surreal moment,” Barton said. “It’s something you dream of as a kid, to one day make history at the biggest stage."

Cousins added a 3-pointer and a pair of free throws around a jumper by Garrison Mathews in the final 1:16 of the third period and Denver took a 17-point lead into the final quarter. “They had the lead the whole game,” said the Rockets’ Eric Gordon. "This is a game where you’ve got to come in here and take it from them. You’ve got to disrupt their rhythm somehow. Of course we’re in the game but it’s a different kind of energy and effort to really try to win the game and we just didn’t have that tonight.”

Cousins’ dunk, one of several that he had in the game, put the Nuggets up 103-89 with 4:43 left and Denver maintained a double-digit lead the rest of the way. Cousins was taken out of the game with just under two minutes remaining and got a hug from coach Michael Malone and an ovation from the crowd.

Rockets: G Dennis Schroder missed a second consecutive game with a sprained right ankle. … Former Nuggets star Kenyon Martin was on hand in the stands to watch his son, Kenyon Martin Jr., play for the Rockets. … Houston has only seven wins in 34 road games.

Nuggets: G Austin Rivers also was ruled out of the game because of a non-COVID-19 illness. … F Zeke Nnaji remains sidelined due to bilateral knee soreness. … Cousins’ previous season high was 22 points against Dallas on Dec. 23 while with Milwaukee. … Denver swept its season series with the Rockets 3-0.