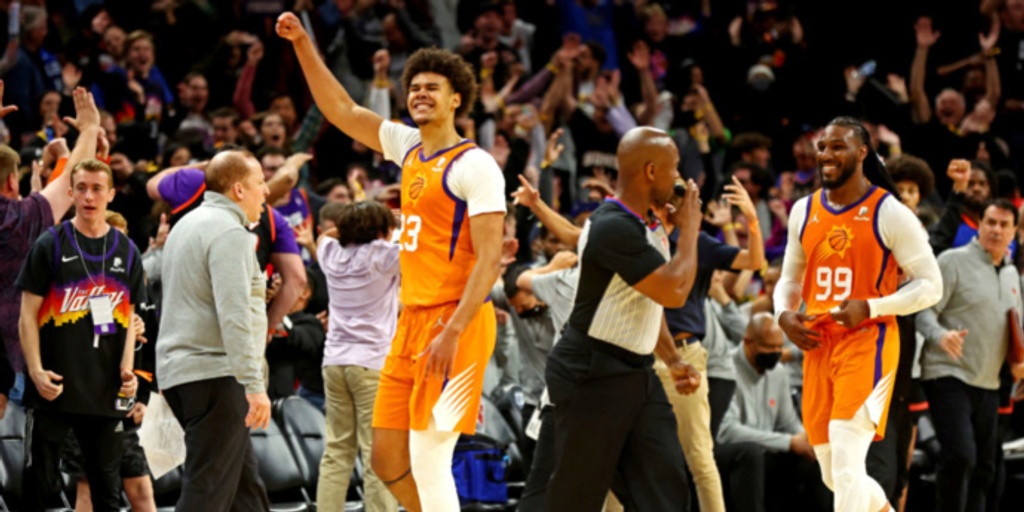 Cam Johnson banked in a 3-pointer at the buzzer to finish with a career-high 38 points and give the Phoenix Suns a wild 115-114 victory over the New York Knicks on Friday night.

Johnson's ninth 3-pointer in 12 tries came from 31 feet at the top of the key. The NBA-leading Suns, playing without All-Star guards Chris Paul and Devin Booker, improved to 51-12.

The Knicks looked as if they were headed for an impressive road win before Julius Randle's ill-timed ejection in the third quarter in an exchange with Johnson.

New York blew a 14-point lead following Randle’s ejection, but Mitchell Robinson’s layup with 15 seconds left gave the Knicks a 113-112 lead. Alec Burks added a free throw to give the Knicks a 114-112 advantage — but missed his second attempt — giving the Suns an opportunity in the final seconds.

That's when Johnson capped his huge night with his biggest shot, sinking the long 3-pointer after Cam Payne's pass. Johnson's shot was long, but smacked off the glass and through the hoop.

The Knicks — up 86-76 when Randle was tossed — have lost seven straight.

Randle and Johnson were called for technicals after bumping chests and exchanging words. A referee separated the two, but then Randle barreled through the ref to shove Johnson again, which earned the ejection.

Paul has been out with a broken thumb since Feb. 16 and could miss the rest of the regular season. Booker missed his second straight game because he's in the league's COVID-19 health and safety protocol.

Payne finished with 17 points and 16 assists. Mikal Bridges had 20 points.

Suns: Johnson took a hard shoulder to the chest in the first quarter and briefly went back to the locker room. He came back for the second quarter and scored nine points before halftime. ... Hosted a 20th consecutive sellout crowd of 17,071 at the Footprint Center.

Suns: At Milwaukee on Sunday.