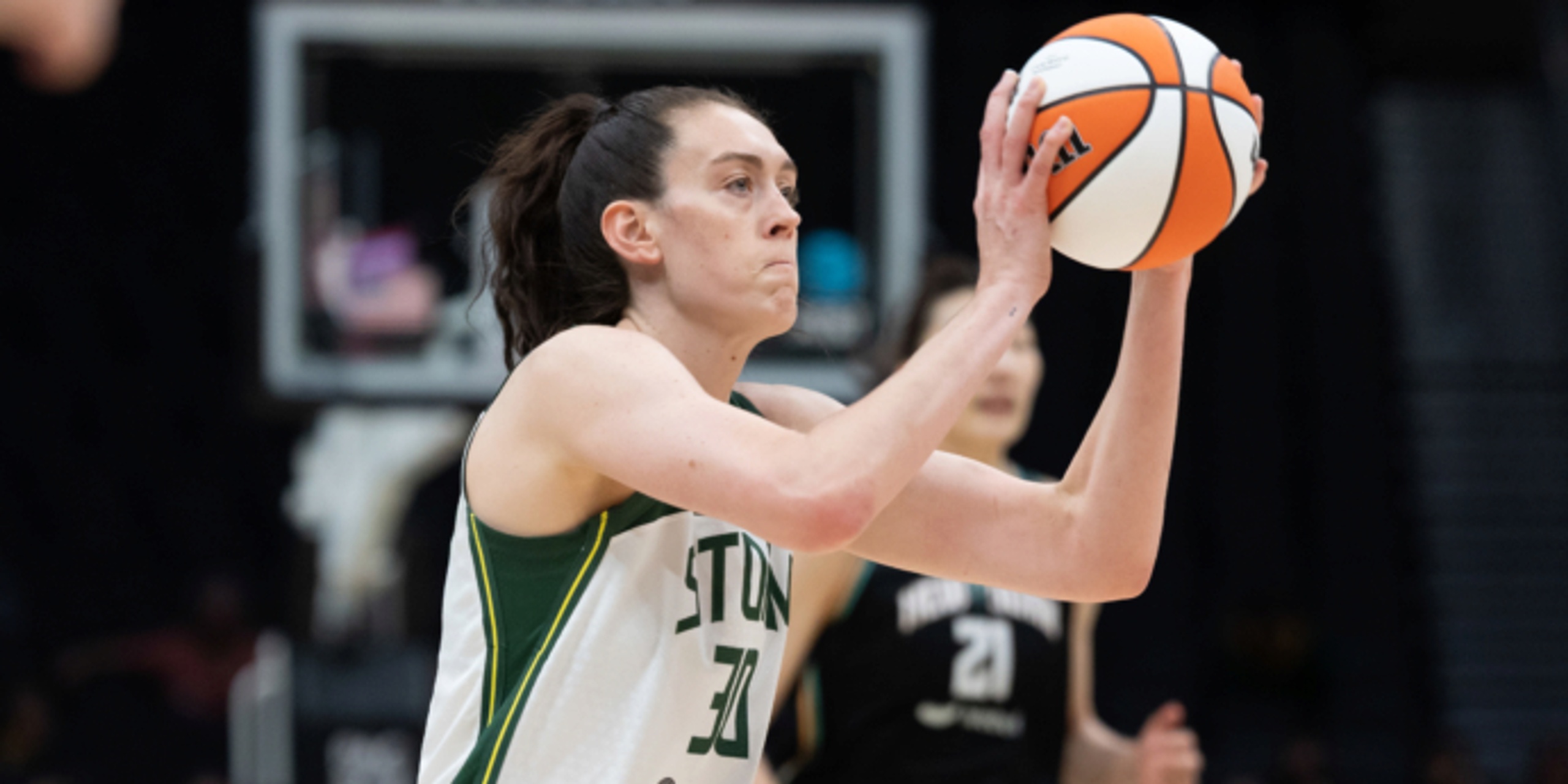 2022 WNBA Playoffs: One key stat to know for each team

It really took the entire season for the WNBA to solidify its playoff hierarchy.

We had four teams battling for two spots on the very last day of the regular season with the top seed also in flux. Late-season injuries, breakout players and roller-coaster games made it challenging to even visualize what the 2022 postseason would look like.

Now, the dust has settled, and we've arrived at what should be a chaotic, thrilling three rounds of playoff basketball.

I've listed one noteworthy statistic for each team that's worth remembering as we get into the games. This won't be a full playoff preview (we have one coming though!), but more a snapshot glance at the flavors and storylines surrounding each squad. Get yourself ready for Wednesday's first round here!

The Aces have been on top of the league practically all season, and are led by an MVP frontrunner in A'ja Wilson. But the most impressive number I found came from Las Vegas' leading bucket-getter. Kelsey Plum canned 37 unassisted made triples in the regular season. According to the PBP Stats hub, which contains data back to 2009, that's the second-most of any player in a single season behind only Diana Taurasi (47 in 2018).

Plum's stepback game is just filthy. She can also rise into her shot so quickly, which flummoxes screening defenders hoping to contain her. Plum is averaging twice as many unassisted three-point makes per 100 possessions (4.57) as she has in any other season of her career, and she's still shooting over 42% from distance. She will be an instant highlight throughout this postseason.

The Sky have dished out a whopping 11 at-rim assists per game in the regular season. That's by far the most in PBP Stats' WNBA database, which dates back to 2009. Chicago has lead the league in at-rim assists each of the last five seasons, but the team hit an impressive new frontier in 2022.

Courtney Vandersloot led The W with 3.0 at-rim assists per game this season. Candace Parker (2.4) and Emma Meesseman (1.8) also placed in the top 15. With a dazzling playmaker like Vandersloot, big passing hubs like Parker and Meesseman and an all-world slasher in Kahleah Copper, Chicago can creatively pressure the paint like no other.

Don't be fooled by the third-seed billing; Connecticut has been perhaps the hottest team in the league since All-Star weekend. The Sun's 12.7 Net Rating ranks at the top since the break, and they also hold the league's best Defensive Rating (95.9) in that span.

The Sun are, amazingly, the only team with zero players averaging at least 15 points per game post-All-Star. They've had an incredible blend of spotlight stars in the last month. Alyssa Thomas posted the first two triple-doubles in franchise history. Jonquel Jones is maintaining her MVP-caliber dominance with a lighter minutes load. Natesha Hiedeman has drilled 48.6% of her threes since the break.

Connecticut's starting lineup of Hiedeman, Courtney Williams, DeWanna Bonner, Alyssa Thomas and Jonquel Jones has the third-best cumulative plus-minus in The W post-All-Star break — and the team has Brionna Jones coming off the bench. Everything seems to be clicking at the right time.

No WNBA pairing has assisted each other more than the dynamic duo of Sue Bird and Breanna Stewart. They've connected a combined 84 times this season, with 62 assists coming from Bird and 22 from Stewart. Seattle has a high-octane offense, and these two help fuel the engine.

Several of these assists come from Stewart getting into her bag in the post. But Bird will also orchestrate sets that give Stewart driving and cutting chances. In return, Stewart recognizes help when she's posting up, and frequently hits Bird for open three-pointers. They've got some of the best chemistry you'll see between any two teammates in the playoffs.

Shakira Austin has entrenched herself as a highlight of an impressive 2022 rookie class. The third overall pick is already one of the top rebounders in the WNBA, and her defensive rebound rate off of missed field goals (24.1%) is third among all players with at least 500 minutes played, per PBP Stats. Austin is also sixth in offensive rebound rate (9.5%). She racked up 40 putback points this season, tying her for seventh with Tina Charles.

Even at 6-foot-5, Austin isn't really a bruiser. The way she hones in on a rebound is almost falcon-like. She soars past boxouts with a burst and can high-point the ball with precision. As Mark Schindler wrote earlier this season, Austin's budding two-way skills are also worth following, but she's already arrived as one of the best on the boards.

Arike Ogunbowale will miss at least the first round of the playoffs after suffering an abdominal injury. Rookie Veronica Burton has been thrust into the starting lineup in her absence, putting the Northwestern guard into the spotlight just as the young Wings prep for the postseason.

Burton's still experiencing the steep professional learning curve. But, as evidenced by her 3.3% steal rate, the second-best among WNBA players moving on to the postseason, she's already a defensive force.

Burton reads cutters like a fortune teller, as shown in the first two clips above. She also has the lateral movement to play uber-aggressively on digs and help because she can recover; in addition, she's spectacularly active with her arms and timing. It's just fun to watch her play defense, and it can help provide a spark for Dallas as it looks to upset Connecticut in the opening round.

Marine Johannès just hit her sixth three with a one-legged jumper off the screen. 🤯 WHAT?! pic.twitter.com/hZpcTDUDoL#Ownthecrown #WNBATwitter

The Liberty generate 41.4% of their team's shots from beyond the arc — the highest percentage in the WNBA this regular season. Sabrina Ionescu leads the squad from a volume perspective (7.3 attempts per game), but New York sends the ball around to several perimeter-oriented players.

Another crazy stat: Diamond DeShields with 15 points in 18 minutes 🤯🤯pic.twitter.com/151tuZHl3k

The Mercury have played a grand total of 236 minutes without Skylar Diggins-Smith and Diana Taurasi on the floor this season. That's a small sample size — 160 of those minutes have come after Aug. 4, the last time either of them suited up for Phoenix. Diggins-Smith is currently out for undisclosed reasons with no timetable; Taurasi also has no updated timetable as she deals with a quad strain. Returning two stars would obviously be beneficial, but for now, Phoenix has to defend its 2021 Finals run with its supporting cast.

Fortunately, several players have stepped up when the Mercury has needed them. Sophie Cunningham has shined in a Swiss Army Knife-type role, as Nekias Duncan detailed earlier this summer. Diamond DeShields dropped a pair of 20-plus-point outbursts in two huge games to help Phoenix reach the postseason. Brianna Turner is one of the best shot-blockers in the league.

The Cunningham-Turner-DeShields trio has a minus-4.33 NET this season without Taurasi and Diggins-Smith. Phoenix's most-played lineup since Aug. 5 includes those three, Shey Peddy and Jennie Simms; they're a minus-1 in 68 minutes. We'll see how well they can hold up without the star backcourt duo.