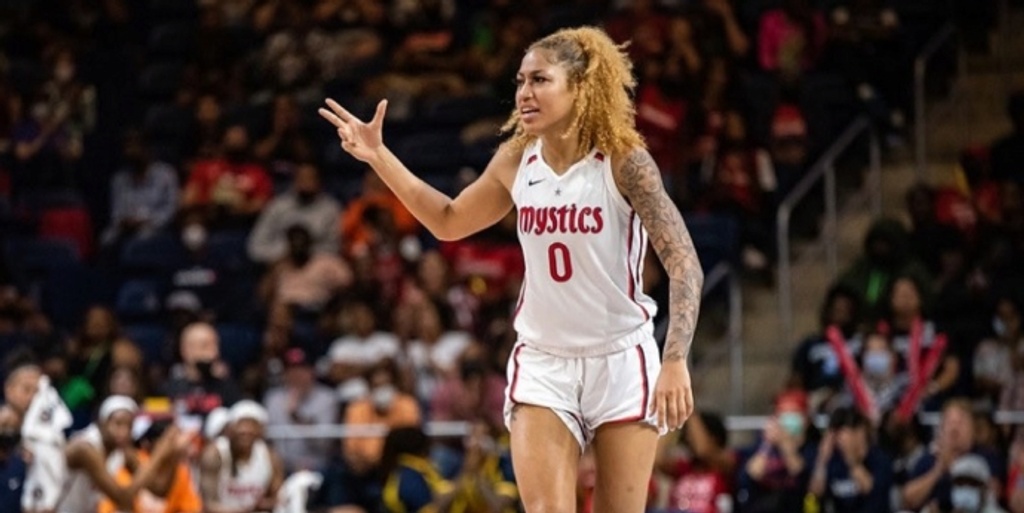 Shakira Austin is showing out for the Washington Mystics

The 2022 WNBA rookie class has continually impressed on a multitude of fronts a third of the way through the season.

Atypical rookies like Kristy Wallace and Rebekah Gardner, who entered the league with a wealth of overseas play, are already playing a fundamental role on playoff teams.

The Indiana Fever superclass has been electric. NaLyssa Smith looks like someone who could grow into one of the best scorers in the league. Queen Egbo has impressed me greatly, blowing away rookie-year expectations with her stellar defense. Destanni Henderson should have been a first-round pick (and I'll die on that hill!). Emily Engstler has some of the most intriguing flashes and upside in the class, and I have no idea what to project her as going forward. Lexie Hull's minutes have been inconsistent, but the idea of what she can be in the league is clear as day.

Veronica Burton's defense has been fantastic for a Wings team trying to establish an aggressive scheme and mentality. The flashes she has shown as a steady hand in the halfcourt have been impressive as well, and her scoring and shooting are coming along too (she has as many threes in the past two games as she had in the first 11!).

There are multiple first-rounders whom we haven't even seen in extended minutes due to rotation crunches (Kierstan Bell) and injuries (Rae Burrell and Nyara Sabally).

Atlanta Dream forward Rhyne Howard has taken the league by storm, already cementing herself as one of the better perimeter players in the WNBA. She could make the All-Star team or All-Defensive team as a rookie and I wouldn't bat an eye.

Building our foundation for this season AND next.#AllAboardToTheFuture // @amtrak pic.twitter.com/6Fge9u77j7

Based on the way Howard and No. 3 overall pick Shakira Austin have played thus far, this is a trade we're going to retrospectively debate for years to come.

Howard has been sensational for the Dream, and while Austin's box score isn't as gaudy and she doesn't create offense in the same way, her impact has arguably been as strong for the Mystics. I'm not interested in pitting the two against one another and going "____ won the trade because ____ is better than _____!"

We are not even a full year into their careers! It's too early for that! But it's important to note that while Howard is rightfully a runaway for Rookie of the Year at the moment, Austin has been vital for a team in contention, earning a starting role and showing bright flashes of her offensive upside as well.

On/off stats are imperfect. They shouldn't be taken at face value, but they're a notable point of reference when considering state of play. Among players who have played at least 200 minutes in the 2022 WNBA season, only six players have an on/off swing of +22 or higher: A'ja Wilson, Ariel Atkins, Brianna Turner, Chelsea Gray, Sabrina Ionescu and Shakira Austin. That's pretty incredible company!

The Mystics' offense (+16.67) and defense (+12.44) perform substantially better with Austin on the court, per PBP Stats.

As she showcased last night against the Phoenix Mercury, she's adept at flowing within the offense. Her screening and rolling along with intuitive cutting make her a remarkably effective spacer in spite of not being a shooter out to the arc. Quick decisions and intuitive decisions that work within the offense are arguably as impactful as shooting, especially when a player with Austin's size and fluidity is making them.

Austin makes some fantastic connective passes within the offense, an incredibly important aspect for someone functioning primarily as an offensive outlet.

Her face-up drives both off the catch and from a standstill have impressed. Her ball control and strides at her size make her a difficult cover for bigger 5s, but her strength to mash a smaller defender provides an equal challenge for defenses. Her footwork is already incredibly advanced as a rookie, both on the roll and in the post. Her coordination at 6-foot-5 is kind of insane!

Send a blitz at Natasha Cloud or Ariel Atkins, and Shakira can slip and cover that ground to the rim just as quickly as you took it away.

She's made some stellar live-dribble passes on the roll and on drives that make me extremely excited about her playmaking potential as well.

Austin's defense has been equally adept. Off rip, the shot-blocking and rim protection has translated (seventh in the league in total blocks, per Her Hoop Stats), but her pick-and-roll defense has been huge for a team built on the back of it's ability to contain the ball. She already has shown good feel for showing and recovering, playing near the level of the screen, and particularly roaming weak-side.

Watch the first stab playing close to the level against Courtney Vandersloot in pick-and-roll. Her hand activity keeps improving, and her reaction time and recovery tools give her top-notch margin for error.

Most of her fouls have come from overaggression or general timing on late contests, largely on switches or against smaller wings and guards. Austin has shown the ability to switch in a pinch and ride out drivers to the rim, but honing that aggression will be huge in developing that versatility.

What Austin has brought the Mystics from day one as a rookie cannot be understated. She's played even better defense than former First Team All-Defensive member Elizabeth Williams (who has been very good in her own right!) and solidifed a starting spot. The sky is the limit on what she can be, and although she's been in a more contained role in DC, it's clear that there's a great deal of untapped potential that continues to be excavated game by game.

Shakira Austin is already a problem in the league, and her culmination of skills, size, aptitude and demeanor make her one of the most exciting young players in the WNBA.