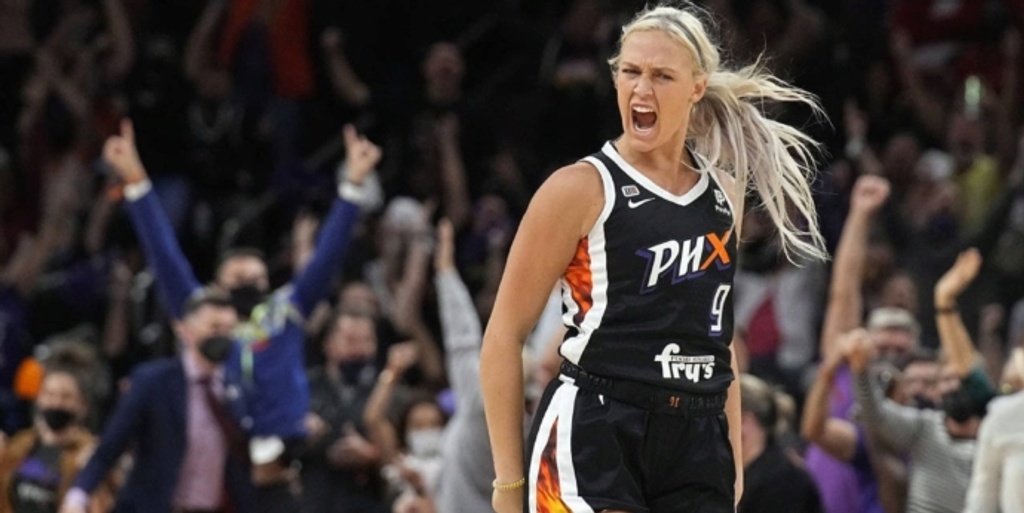 Sophie Cunningham giving the Phoenix Mercury a lift at the 4

The WNBA is locked into three tiers at this point of the season. There's the tippy top with the contenders: the defending champion Chicago Sky (who may need a tier of their own soon), Las Vegas Aces, Connecticut Sun, Seattle Storm and Washington Mystics.

The Indiana Fever are in their own Tier of Woe, sporting the worst record in the league (5-24) despite having an All-Star-caliber guard in Kelsey Mitchell, and plenty of young talent to be excited about moving forward.

And then there's the middle. A hodgepodge of teams seeded 6-through-11 that are a week away from earning praise or garnering "will-they-miss-the-playoffs-altogether?" discussions. There are six teams separated by three games, fighting for the final three playoff spots. It's a fun or stressful race, depending on who you root for.

The Phoenix Mercury are currently making a push in that middle tier.

We aren't far removed from wondering if it was best to blow things up. We've had a sideline star dustup, a future Hall-of-Famer leaving midseason and joining one of the contenders shortly after, and a clown emoji situation that I'm still cackling about. The Mercury haven't just been an underwhelming team this season, they ranked very low on the "good-vibes" scale.

Here they are though: 6-4 in their last 10 games, quietly pushing their way to the eighth and final playoff seed. Since June 25, they have a better offense than the Storm and Sun, and a better defense and net rating than the Aces.

Despite ranking last in pace during this stretch, the Mercury are going full Moreyball to give themselves a shot. Nearly 70% of their shot attempts have come from three or at the rim; they lead the W in three-point attempts (29.6, 36.7 per 100 possessions) and their 20.7 free-throw attempts rank second behind the Dallas Wings (21.5).

Right behind them in production is Sophie Cunningham, whose insertion into the starting lineup as a small-ball 4 has juiced the offense. She's averaging a shade under 17 points during this stretch behind ridiculous shooting. A 42.5% clip on 8.0 attempts is typo-level good, especially when you factor how many of her threes are coming off of movement.

To that point: Cunningham at the 4 has made life easier for everyone around her, while putting more strain on defenses.

The Mercury's Friday night beatdown of the Seattle Storm gave us plenty of examples. Cunningham herself had a solid outing — 19 points, including 5-of-10 shooting from three — but the way she was used continuously put the Storm in tough spots.

Take the opening bucket from Phoenix.

The Mercury go with a high pick-and-roll between Taurasi and Brianna Turner. Even at this stage of her career, defenses have to respect Taurasi's ability to pull up. That's what makes Cunningham's positioning key; she's one pass away, which puts strain on Breanna Stewart as a helper since she's responsible for tagging Turner on the roll. 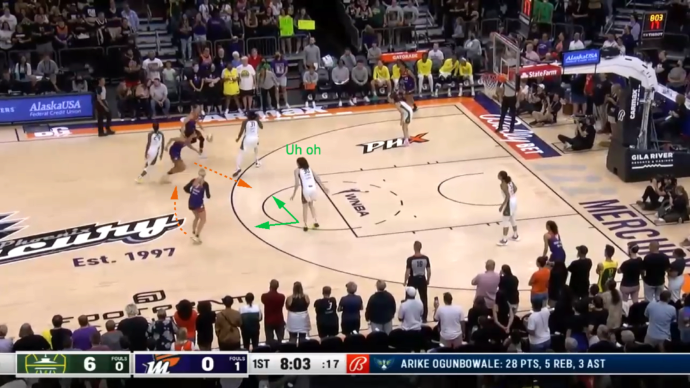 With Tina Charles stepping up to take away Taurasi's space, Stewart is stuck between tagging Turner on the roll or sticking with Cunningham on the perimeter. Cunningham exacerbates this issue by lifting higher on the floor, and eventually gets an open three out of it.

I even think of quieter possessions like this, with Cunningham stashed in the weakside corner. It doesn't lead to a bucket, but look at who makes the rotation on this drive from Diggins-Smith, where it comes from (the strong side, a general no-no), and the difference in urgency compared to Cunningham's defender.

The Mercury have found success using Cunningham as part of their HORNS or HORNS-adjacent sets. Using her as a screener or flare option means involving a big; most of whom aren't used to defending movement shooters. Stewart is a legitimate DPOY candidate and you see how she isn't exempt from making hard choices in space.

Beyond that, Cunningham embraces contact. That leads to #antics at times, but in general, her willingness to get her hands dirty makes her a pretty useful off-ball threat. She doesn't mind prying others open. And because of her shooting ability and spatial awareness, defenses really have to be connected or they risk giving up something easy.

I loved the Mercury going to this set on back-to-back possessions in the fourth quarter on Friday night. Cunningham starts in the corner this time, but the objective is for her to screen for Taurasi and see what opens up.

On the first trip, Cunningham's lead block creates a triple for the legend.

On the next one, Cunningham slips into open space against a switch. Remember, folks: the best way to beat a switch is with a slip.

It's important to stress that the Mercury are generating these looks against the Seattle Storm, the team that had the best defensive rating in the W heading into Friday night's action.

Since June 25, the Mercury are outscoring teams by 9.3 points per 100 possessions with the Cunningham-Turner pairing on the floor. The starting unit with those two, Diggins-Smith, Taurasi and Shey Peddy has posted a plus-13.1 net rating in that time frame — one of the best marks in the W.

Long term, the bellwether for Sophie-at-4 lineups will continue to be the defense. Listed at 6-foot-1 and 170 pounds, Cunningham is at a size disadvantage against most 4s. Teams haven't been shy attacking her on the block; per InStat tracking, she's defended 16 post-ups in the last three games. She's held up for the most part; again, she embraces physicality, and she also contests pretty well without fouling.

The issue is what happens after the shot. Her opponent may miss, but they'll likely have the fast track to an offensive rebound. And to that point: the Mercury have by far the worst defensive rebound rate in the W over their past 10 games, grabbing just 62% of misses.

Overall, things have worked because Cunningham has been so good offensively. The shooting, and the multiple platforms it can be used in, has juiced the Mercury's attack.

As long as that continues, they'll be in good shape to hold onto a playoff spot.