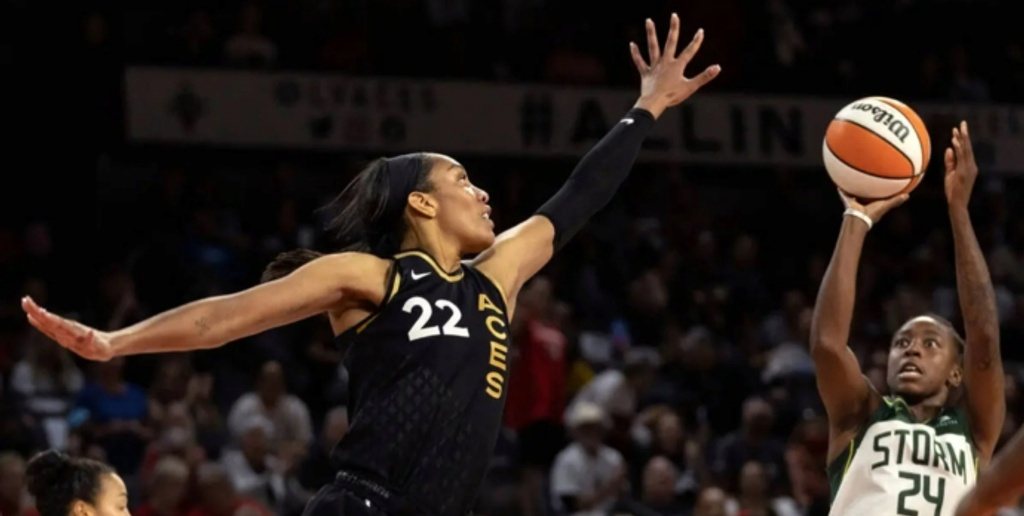 Did WNBA voters select the right DPOY and All-Defensive Teams?

Well, this was unexpected.

Not the award recipients — the actual announcements. The WNBA's Defensive Player of the Year and All-Defensive Teams were originally slated to be announced on Friday (September 2), until that was bumped up to a noon ET release on Tuesday.

(It would've been nice to have an earlier heads-up; altering the schedule is one thing, but announcing the change roughly 30 minutes before the new time was... let's just call it odd!)

Aces star A'ja Wilson was named Defensive Player of the Year. Her box-score numbers speak for themselves; she led The W in blocks (1.9), ranked second in defensive rebounds (7.6) and finished just outside the top-10 in steals (1.4).

Beyond that, her versatility at the 5 allowed the Aces to toggle through multiple schemes. They were an aggressive, hard-hedging group to begin the year. We've seen them settle into drop coverage, and also switch across the board in an effort to minimize advantages with screening actions. That versatility wouldn't exist without the work A'ja did.

The voting results were as follows (56 total):

It's worth noting that the ballot for WNBA DPOY operates a little differently than the NBA side. Award voters for the NBA are asked to give their top-three choices, but WNBA voters only select the winner.

The voting tally — how many people voted for each player — for the All-Defensive Teams haven't been released (at least as far as I've seen), but we do have those results as well.

Right away, a couple things jump out for me. Fowles making an All-Defensive Team, especially the First Team, is a nice bow to place on a legendary career. Even at this stage of her career, she was able to hold her own in drop coverage, managed to finish third in defensive rebounds (7.3) and was one of seven players to average at least one steal (1.0) and one block (1.2) per contest. Fowles should be remembered as one of the most dominant defenders of all-time.

She also shouldn't have made a team, much less the first one.

Part of the reason she made the First Team was confusion over how to list Wilson. Wilson has started at the 4 for most of her career, but has held down the 5 for the Aces for the majority of the season. I understand how that dynamic, in addition to Wilson still being listed as a forward on the W's official site, could confuse the voters. However... Wilson was the center this year. She started there, handled the jump balls and, more importantly, defended centers for a large chunk of the season.

If Wilson gets voted in as a center, that would've dropped Fowles to the Second Team while opening up a forward spot for Thomas. It's a little odd that Thomas wound up on the All-Defensive Second Team despite finishing second in DPOY voting.

As much as I respect Fowles' career and her being a solid defender at this stage, I'm not sure a Second-Team nod would've been appropriate either.

Ezi Magbegor, who was oddly voted on as a forward, was an early DPOY candidate due to her activity in Seattle's system. Mercury center Brianna Turner and Mystics rookie center Shakira Austin both excelled in space while offering quality deterrence at the rim.

The biggest travesty in all of this was Sky forward Candace Parker being left out of both discussions. It's also a shame that her teammate Rebekah Gardner wasn't an All-Defensive-Team member — I had her as a First-Team guard on my fake ballot — but I could at least see the voters shying away from giving the honor to a bench player.

There is no logical explanation for Parker not making a team.

There is no coherent numbers argument against Parker. She was also one of the seven players to average at least a steal and a block this season, and actually led The W in defensive rebounds (7.7). The Sky ranked fourth in defensive rating this season (99.7), and they were stingier with Parker on the floor (99.1). The same can't be said for Fowles on either front.

If that isn't enough, the film certainly doesn't lie. She was tasked with doing quite a bit: hard hedging against ball screens, patrolling the paint in a drop or as a helpside defender, navigating space on switches. You watch this compilation and tell me Parker wasn't one of the league's best defenders this year.