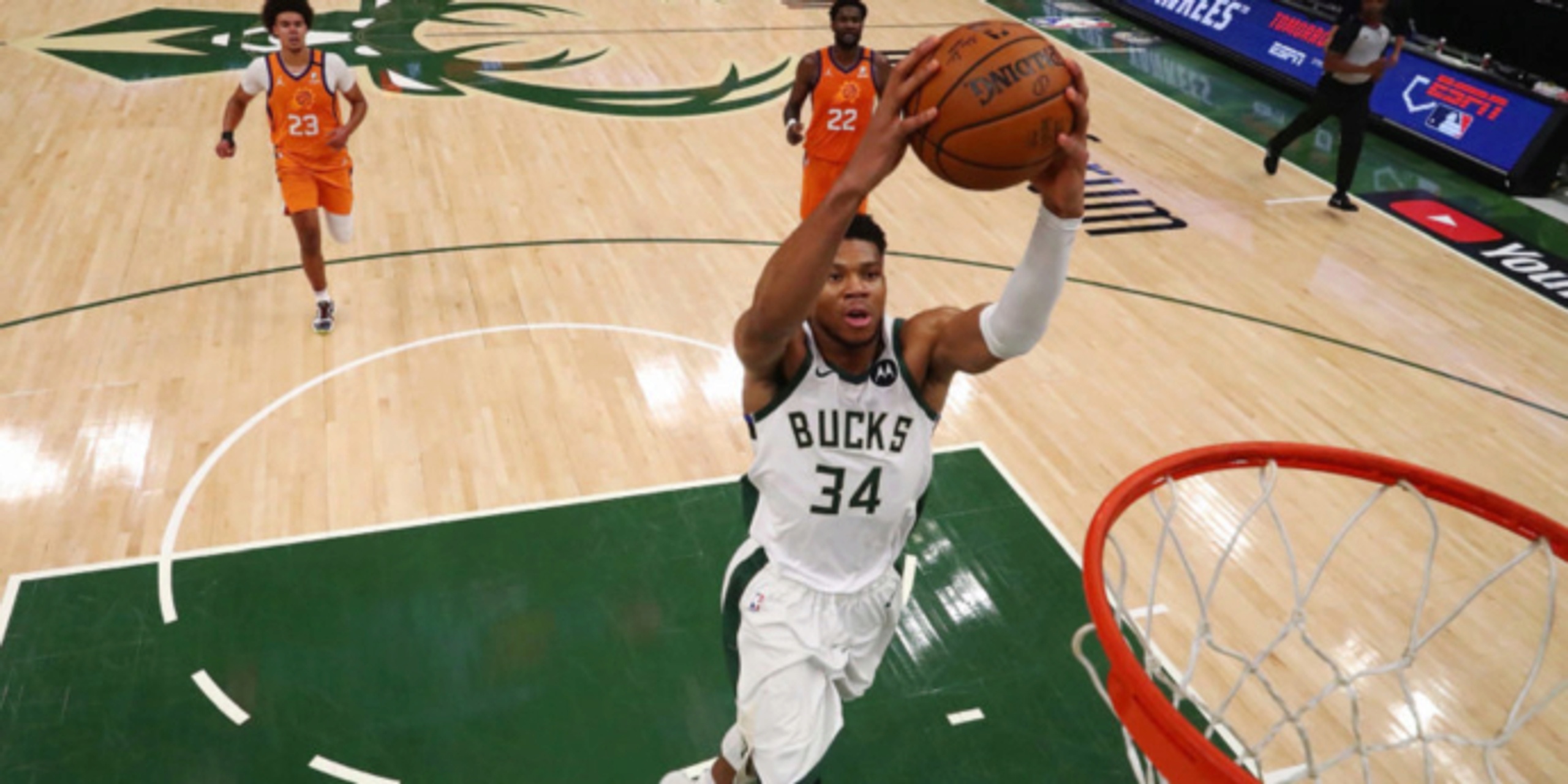 Win or lose, Giannis Antetokounmpo should be NBA Finals MVP

Since its inception in 1969, the Bill Russell NBA Finals MVP Award has only been given to a player on the losing team one time in history -- when the first-ever Finals MVP Award was given to Jerry West. West got the award even though his Los Angeles Lakers lost to the Boston Celtics in seven games.

Fast forward to the 2021 NBA Finals, and Giannis Antetokounmpo may have put himself in position to win the award regardless of whether the Milwaukee Bucks win the series.

My, how things have changed.

Back in 2020, James Harden voiced a critique of Giannis, saying, "I wish I could be seven feet, run and just dunk. That takes no skill at all. I gotta actually learn how to play basketball and how to have skill. I'll take that, any day."

It seems that many people have clung to that notion and piled on Giannis by consistently criticizing him. You heard it from sports pundits (on ESPN, FS1 and sports-talk radio) and everyday fans (in barbershops, on social media and pretty much anywhere basketball was being discussed).

After Game 2, ESPN's Richard Jefferson said, "When Giannis is at his best... You don't know if everyone benefits around that."

Kendrick Perkins, insisted that Giannis is not “the guy” on the team and more of a “Robin” to Khris Middleton's “Batman.”

Jalen Rose had a take, as well.

Now, in their defense, their criticisms weren’t exactly unwarranted. Last year’s bubble performance from the Milwaukee Bucks — a first-round exit despite being a No. 1 seed — is definitely worthy of criticism.

However, this NBA Finals, Giannis is making his case to be the Finals MVP whether the Bucks win or lose. And he definitely deserves an abundance of credit, especially after his performance in Game 4.

It’s also important to note that he is doing all of this on a hyper-extended knee, an injury he sustained in Game 4 of the Eastern Conference Finals against the Atlanta Hawks. Immediately thereafter, he was questionable for the NBA Finals, altogether

However, after powering his way to his second straight 40-point game after leading Milwaukee to a 120-100 win over Phoenix in Game 3, Giannis became just the second player in NBA history to score more than 100 points and grab more than 40 rebounds over his first three career NBA Finals games, according to the Elias Sports Bureau. He also joined Shaquille O’Neal, becoming the second player in NBA history to light up the stat sheet with more than 40 points and 10 rebounds in consecutive NBA Finals games

Giannis is currently leading both the Milwaukee Bucks and Phoenix Suns in points, rebounds, blocks and free throws. And for the analytics crowd, he is also leading in a stat called box plus/minus (also known as “BPM”). According to Basketball Reference.com, BPM is "a basketball box score-based metric that estimates a basketball player’s contribution to the team when that player is on the court.”

“Giannis' 14.3 BPM would be the second-highest for a single Finals on record (the number is tracked on a game-by-game basis back to the 1984-85 season). If he finished with that number, only Michael Jordan's 16.0 in the 1991 Finals would be superior.”

Wisely, when presented with the comparison after Game 3 by three different reporters, Giannis refused to take the bait and responded with the same phrase.

“I’m not Michael Jordan,” he said.

I bet reporters couldn’t wait to write that Giannis compared himself to Michael Jordan, so good for him for not giving them that storyline.

However, he is doing something that we have rarely seen in the NBA. A seven-footer, (I don’t wanna hear any of this 6-foot-11 foolishness, he is all of seven feet) with the ability to bring the ball up the floor, initiate half-court sets, lead the fast break or go one-on-one from any spot on the court. He can drive-and-kick, set up his teammates for open threes, keep his crossover low enough at seven feet to avoid opposing swipes and has a spin move that is NBA 2K-level unstoppable. Somehow, he’s still able to avoid charges (which is on every opposing team’s scouting report as one of his only liabilities) with his patented long-legged, long-strided Euro step or jump stop, knock down an occasional three-pointer to keep the defense honest (which is still a work in progress) and finish everything around the rim with the ferociousness that causes countless opponents to make “business decisions” to not challenge.

Giannis also blocks shots, controls the paint and protects the rim. We obviously saw that in Game 4.

Let me repaint the scene. Milwaukee had a 101-99 lead with a minute and some change left in a crucial, must-win game. Devin Booker, who put on a show, drove right at Giannis into the lane, but instead of shooting the one-handed runner he had executed all night with both hands, he lobbed a pass to Deandre Ayton for a well-drawn play by Phoenix coach Monty Williams. Giannis left his man and rotated over to help on Booker and control the paint, but possessed the lateral movement to recover back to Ayton to block his dunk attempt, one which would have tied the game. The block electrified the crowd and the team and Milwaukee ended up protecting the lead and winning the game. That’s MVP status

The 📸 PHOTO & the 🎥 PHANTOM of @Giannis_An34's huge block, from the near baseline! pic.twitter.com/GmULWgu84A

After the game, Kris Middleton, who led the Bucks with 40 points, had the following to say about Giannis’ defensive play.

"To be able to read that he's going to throw the lob and go up there and get it, that's elite."

Giannis didn’t seem too impressed with himself, though, which is a part of his charm.

"I thought I was going to get dunked on, to be honest," he said

But that’s what makes him special.

He didn’t make a “business decision” and give up on the play in order to save face and point to whoever should’ve rotated after Ayton dunked the ball. He didn’t worry about making multiple memes and posters and jokes if he got dunked on. He took it upon himself to recover and make the game winning play.

When it counted most, Giannis was fearless and saved the day. And in the process, he is making a very strong case to be NBA Finals MVP, whether the Bucks win or lose the series.