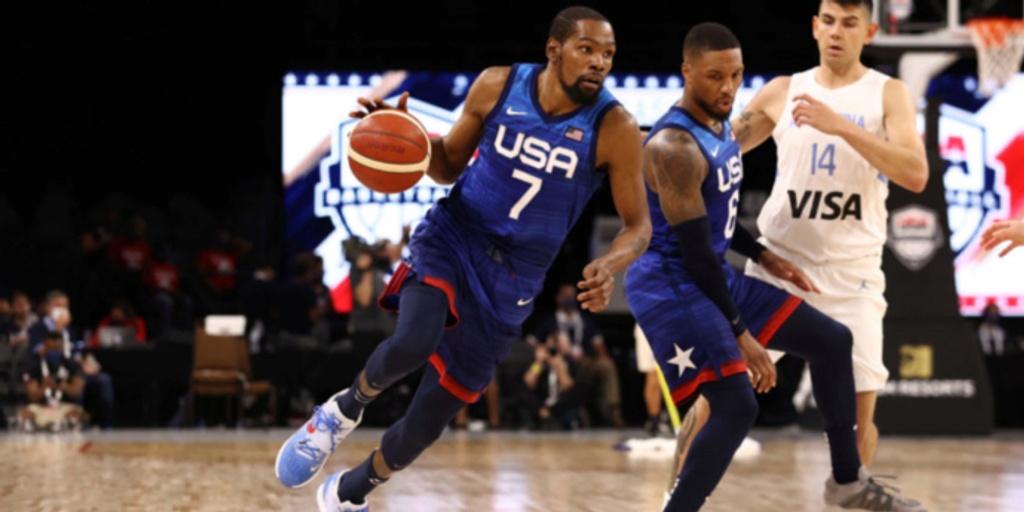 On Thursday evening, it was announced that Friday's exhibition game between Team USA and Australia has been canceled due to health-and-safety protocols. See below for the official press release from Team USA Basketball:

"The USA men’s and women’s national teams will conclude their exhibition schedule on July 18 when the USA women take on Nigeria at 2:30 p.m. (PDT) and the USA men will follow playing Spain in a 6:00 p.m. (PDT) tipoff."

Friday's matchup against Australia would've been the fourth exhibition game for Team USA as they gear up for the Tokyo Summer Olympics, but now the plan is for the Men's National Team to return to action on July 18 for the final exhibition game against Spain. This cancellation comes after starting shooting guard Bradley Beal was ruled out for the Tokyo Olympics after testing positive for COVID-19. Forward Jerami Grant has also been placed in the health-and-safety protocols and his status for the Olympics remains up in the air.

As Team USA evaluates who will replace Beal, it's been rumored that Miami's Duncan Robinson is of interest to Team USA, according to Grant Afseth of Sports Illustrated.

Robinson would surely help Team USA's depth as he spent time at shooting guard, small forward and power forward last season with the Heat. He would also provide the team with long-range shooting, which is much-needed after losing Beal. Over the course of his three-year NBA career, Robinson has averaged 12.3 points and 3.3 threes per game while shooting 42.3% from deep. If selected, Robinson would be the only player from the 2018 NBA Draft on the team.

Team USA is just 1-2 in exhibition play, but the team remains focused on their goal of winning an Olympic gold medal this summer. Team USA's first official game vs. France kicks off on July 25 in Tokyo.