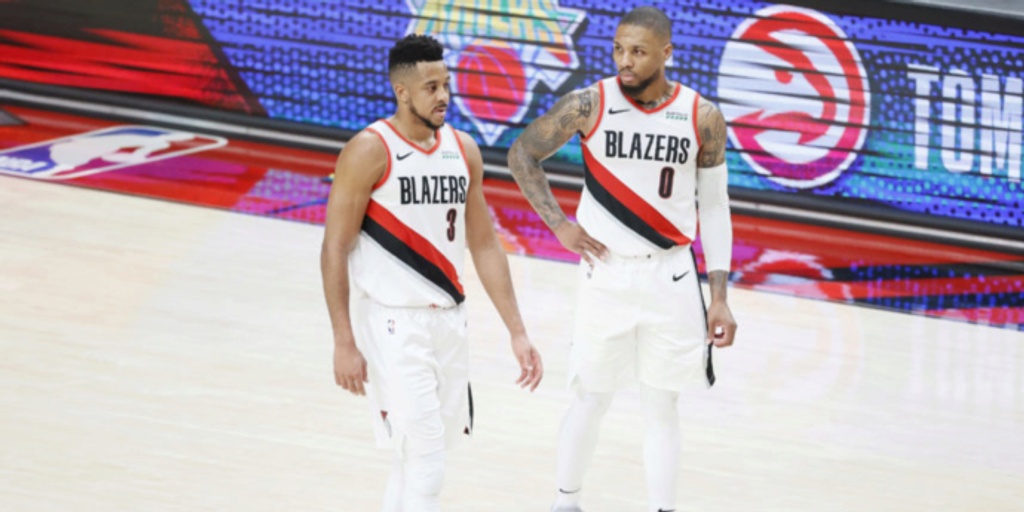 Will the Blazers make a big move to keep Damian Lillard happy?

Damian Lillard wants to win big right now. The Portland Trail Blazers know what’s at stake during the 2021-22 season for their future organizational structure. With Lillard and his camp frustrated about the Blazers’ stagnation, it’s of the upmost importance to figure things out quickly in the Pacific Northwest.

However, how can Portland realistically jump back to the top of a vaunted Western Conference?

During their magical run in the 2019 playoffs, when Portland ultimately reached the Western Conference Finals and got swept by the Golden State Warriors, it felt like lightning in a bottle. Ever since, Portland’s disappointing playoff track record has tried Lillard’s patience. Portland’s superstar had to go supernova in the Orlando Bubble for the Blazers to even make the postseason as the No. 8 seed, only to be throttled by LeBron James and Los Angles Lakers in five games. Then, this past season, Portland lost in the first round once again to a shorthanded Denver Nuggets squad missing Jamal Murray and Will Barton.

So far this offseason, Portland seems content on running it back with their core. Re-signing Norman Powell to a five-year, $90 million extension had to happen after trading one of their top young assets, Gary Trent Jr., to the Toronto Raptors in exchange for Powell. In 27 games with the Blazers last season, Powell averaged 17 points and 1.3 steals while shooting 36.1% on three-pointers. Powell proved his worth as a long-term piece to the Blazers’ puzzle as a snug fit alongside Lillard. Among two-man lineup combinations featuring Lillard, Powell ranked second in net rating behind only C.J. McCollum.

Although it was a disappointing conclusion to a season that showed promise, Portland’s newfound starting lineup fared well in advanced metrics. The five-man lineup of Lillard, McCollum, Powell, Robert Covington and Jusuf Nurkic carried a +13.4 NetRtg in 370 minutes. This ranked No. 2 in the league for starting lineups in net rating, trailing only the Philadelphia 76ers' starters; Portland’s well-balanced attack was 12-9 in the regular season post-Powell trade.

Outside of re-signing Powell to his $90 million extension, the Blazers have made some moves on the margins to improve their depth. Cody Zeller, Ben McLemore and Tony Snell were all signed to one-year deals. Zeller will provide competency behind Nurkic as a backup center, while Snell and McLemore can adequately space the floor and be versatile defenders.

Currently, here’s how the projected rotation looks for Portland:

Is that enough for Portland to break through the middle of the pack in the West? Quite simply, no, it’s not — even with the advanced metrics showing that their starting lineup was very strong. Losing to Denver the way they did helped push Lillard near his boiling point in terms of frustration, and those concerns are valid on his end. Signing three role players to bolster their second unit is nice, but it’s not what’s needed to really put Portland back on the map as a real threat to make a deep postseason run.

Lillard’s longtime backcourt partner, McCollum, is the key to how Portland can necessarily retool around their disgruntled 31-year-old superstar.

Portland’s dynamic score-first backcourt pairing has finally run its course. Since Powell is more well-rounded, he's a better fit next to Lillard — providing stronger defense, capable playmaking and spot-up shooting. The super small-ball lineup between Lillard, McCollum and Powell will not hold up in playoff-style basketball, especially as teams out West continue to get larger. Portland now must dangle McCollum out there on the trading block to add the necessary size and versatility to keep Lillard content long-term.

What can the Blazers even get in return for McCollum, though? That’s a tricky question, because it’s fair to say that McCollum’s contract doesn't have a ton of value at the moment. With three years, $100 million remaining on the deal, Portland will need to package McCollum with a future first-round pick, high-upside prospects or both to receive a difference-maker in return.

Two names stand out from the rest, in terms of fits in Portland: Ben Simmons and Pascal Siakam.

Simmons and Philadelphia seemed destined for a breakup, but Sixers GM Daryl Morey’s asking price is astronomical (four first-round picks plus multiple players). If Portland were to flip McCollum (and other assets) to Philadelphia, Simmons arrives and helps take some pressure off of Lillard to create for others. Lillard can focus on getting buckets, while Simmons sets everything up and provides elite defense.

Although Simmons goes through terrifying moments on offense, his special blend of playmaking and on-ball defense can make up for it in the right situation. The 6-foot-10, 24-year-old point-forward can make magic happen in transition thanks to his court vision and elite athleticism. And on defense, Simmons just finished second in Defensive Player of the Year honors behind Rudy Gobert. Offering menacing perimeter defense, Simmons can freeze out top scoring guards from finding a rhythm. Also, with his size, Simmons can guard up to four positions. Simmons regaining his confidence and finding his true untapped potential seems impossible now in Philadelphia.

For Simmons and Portland, this could be the perfect marriage. Imagine a lineup featuring Lillard, Powell, Covington, Simmons and Nurkic. Although Simmons and Nurkic is a clunky fit in the frontcourt, the floor is spaced out for the Australian product to produce some damage around the rim while also helping Lillard immensely on both ends. Portland's defense has been their biggest weakness and he'd help a ton on that end of the floor too.

Portland's offer for Simmons would probably look something like McCollum, Little or Simons, plus two first-round picks. Yes, that’s a high price to pay, but one that could help smooth things over with Lillard and give the Blazers a chance to make a leap up the Western Conference standings. It remains to be seen if Morey will budge from his asking price and accept an offer like this, but Portland has to try.

Siakam offers similar defensive versatility as Simmons, but he is more of a positive on the offensive end. The Raptors’ star would slide right into the Blazers’ lineup at power forward, allowing the Lillard-Powell backcourt to coalesce even further after promising results last season. In 56 games during the 2020-21 campaign, Siakam averaged 21.4 points, 7.2 rebounds, 4.5 assists and 1.1 steals per game. A year prior, Siakam was a member of the All-NBA team as he grew into the No. 1 role following Kawhi Leonard’s departure.

After Toronto drafted Florida State’s Scottie Barnes with the No. 4 overall pick in the 2021 NBA Draft, rumors started to pick up steam about Siakam potentially being shopped around to the highest bidder. Add on the Raptors also receiving another promising prospect in the Kyle Lowry sign-and-trade, Precious Achiuwa, and the frontcourt's long-term vision starts to form. After Lowry’s departure to South Beach, Toronto’s timeline is murky. They still have Fred VanVleet, but everyone else is a strong member of their young core led by ever-improving wing OG Anunoby. Siakam can certainly still be part of Toronto’s long-term plans, but, similar to Portland, would it be in their best interest to move off Siakam’s contract, which has $106.4 million remaining through the 2024 season?

Similar to the Simmons trade idea, shipping McCollum to Toronto for Siakam would be a steep price. Potentially having to include a young player (Little or Simons) plus a future first-round pick alongside McCollum would be a big step, but one that might have to occur anyways with Lillard’s discontent.

Although the Blazers are still a strong playoff team with their current roster construction, is another middle-of-the-pack finish enough to keep Lillard long-term? Lillard has already answered that question.

“Where we are isn’t good enough,” Lillard said about Portland’s roster during Team USA’s lead up to the Tokyo Olympics. "I just think we’ve reached that point where it’s like, OK, but it’s not enough. Do we actually want to win it all? Is that what we’re shooting for? We’ve got to do things to show that. We’ve got to put action behind that desire to win at that level...

"I think if you look at our team as it is going into next season, I don’t see how you say, ‘All right, this is championship team, you just need a new coach,’ when we lost in the first round to a team that was hurt."

It’s time to make an aggressive push to keep Lillard happy, or this could get ugly by this time next year (or sooner).