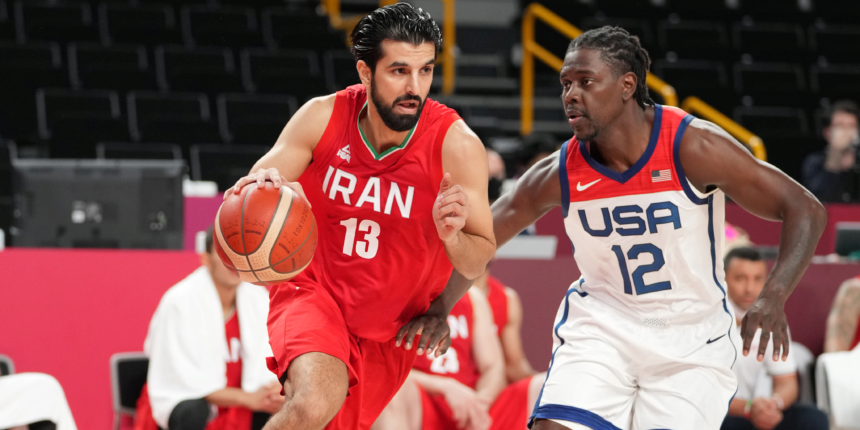 Jrue Holiday is the final piece to any team's puzzle

If the U.S. men's national team does in fact bring home the gold medal in the 2020 Tokyo Olympics, one of the main reasons will be Jrue Holiday, who has proven once again to be the final piece to a championship puzzle.

After having the NBA’s best record for two consecutive seasons, the Milwaukee Bucks fell well short of a championship in both years, failing to reach the Finals at all. But they were missing something. In order to get over the hump, they were one player away.

Jrue Holiday was that player.

Similarly, things were looking pretty bleak for Team USA out of the gate. They opened in Vegas with back-to-back exhibition losses to Nigeria and Australia. And after the Americans lost the group-play opener to France, every writer with a pen began ripping them to shreds. The U.S. team became the butt of jokes all across social media. It was the end of USA Basketball as we know it, according to many overdramatic journalists.

However, in the 83-76 loss to France, one bright spot was Holiday, who had just arrived in Tokyo not even 24 hours prior to the game. When a reporter asked what the team needed to do in order to get back on track, his response was: “This is my first day. Literally, my first day.”

But even with it being his first day, it was evident that his impact on this team would be greatly felt, even though he'd never been on an Olympic stage prior to this game. Holiday led Team USA with 18 points and 4 assists in 28 minutes in that defeat; many media members and spectators alike missed his incredible play given the circumstances. People were understandably more focused on the fact that the U.S. men's national basketball team had just lost its first Olympic match in almost 17 years, which broke a 24-game winning streak in the Games.

But at the time, Holiday had just won the NBA title with the Milwaukee Bucks. He partied and sprayed champagne all night, partied some more at a championship parade, then got on a 15-hour flight to Tokyo. To deliver that performance was amazing in and of itself. After that showing, Holiday was inserted into the starting lineup — and has continued to shine.

Ever since he joined the U.S. starting five, the team has been flourishing. The Americans just dominated Australia 97-78 and will play for the gold medal on Friday evening at 10:30 p.m. ET.

It is interesting how quiet it is when Team USA wins compared to how loud the condemnation rains down from every direction when the Americans lose exhibition games. People were using words like “disgrace” and claiming, “U.S. basketball is now an inferior product." They were taking aim at Kevin Durant (for some reason) and the “individualism of U.S. basketball vs. team concepts of international squads," and criticizing U.S. head coach Gregg Popovich as being over the hill. The criticism went all the way down to AAU level, and of course, you had Stephen A. Smith’s disrespectful rant after Team USA lost to Nigeria. It’s interesting how people aren’t as loud with their praise as they are with their criticism, but I digress.

Coach Popovich described the impact of Holiday in a unique way.

“He’s, in a way, kind of like the meanest man in the valley, but you’d never know it because of his quiet demeanor, his kindness," Popovich said. “But he’s an all-around wonderful human being. And his entry to the team, late as it was, has had an immediate effect, because he garners so much respect from his teammates.”

To add to Pop's praise, Holiday simply gives the U.S. team something it didn’t have before: a pure point guard.

Damian Lilard was playing the point, and is one of the most lethal scorers in the NBA, but he’s not a pure point guard. He has the ability to create shots for himself without a set, drawn-up play — and that’s invaluable — but he’s not a pure point guard whose duties are primarily comprised of setting everyone up and running the team. Inserting Holiday at the point allowed Lillard to concentrate on what he does best, which is putting the ball in the hole.

Numbers don’t lie, and here's a prime example: Lillard struggled in the opening loss to France, going just 3-for-10 from the field. But after Holiday began running the point, Dame flourished with 21 points and poured in seven three-pointers against Iran. That’s not a coincidence.

But more importantly, Holiday’s best skill is his defense.

Whenever I watch Jrue Holiday make somebody disappear, I always go back a couple of years ago to when New Orleans gave him a big contract despite a long injury history. Rep on D was strong. Locked up Kyle Lowry one night & KL told me, "Whatever they're paying him is not enough."

As seen in the NBA Finals, Holiday wore Chris Paul down the entire series. He was picking him up full court almost every time. It was reminiscent of 40 Minutes of Hell at Arkansas. Holiday was stuck to Paul like glue, neutralized him and caused CP3's very uncharacteristic turnover barrage. It was old-school basketball and it changed the series.

Even when Holiday struggled with his shooting, he dominated on the defensive end. In Game 3 in particular, Bucks head coach Mike Budenholzer wisely made the adjustment to abandon all switching, aggressive helping and hedging and recovering; he instead elected to go with Holiday shadowing Paul everywhere he went. Not only did it prove effective, but it was the turning point of the series. Holiday stepped up to the challenge and shined. He didn’t let CP3 breath, and he did the same thing with Devin Booker; according to NBA.com’s tracking data, Booker only connected on 9-of-25 shots when matched up against Holiday.

Now, the U.S. will have to face Rudy Gobert, Evan Fournier and Nicolas Batum of France in a rematch to win the gold.

“Having him, he’s probably the best perimeter defender we have in the NBA,” Zach LaVine said. "And you have him on the [U.S.] team and we’ve got a bunch of guys to help him as well, myself included, trying to take on that role, being able to go out there try to help guard guys.

“But having Jrue out there, you can’t get much better than that on the perimeter.”

Give Jrue Holiday his flowers.

Yes, Giannis Antetokounmpo was the MVP of the NBA Finals, but Holiday was invaluable.

And yes, Kevin Durant is the MVP of Team USA... but when they do bring home the gold, it will be largely because of Jrue Holiday.