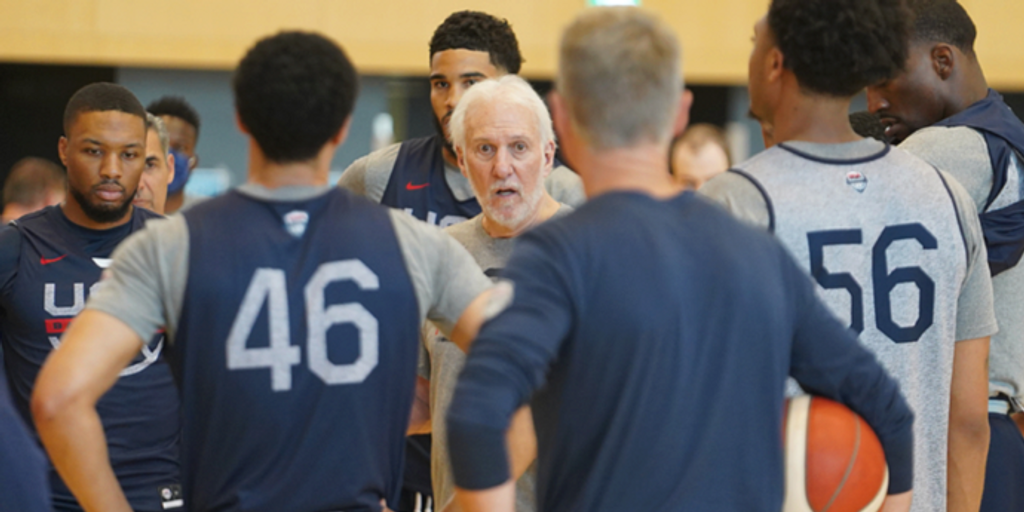 The 2008 U.S. Olympic men’s basketball team is regarded as one of the greatest collections of basketball talent ever assembled.

LeBron James, Kobe Bryant, Chris Paul, Dwyane Wade and Carmelo Anthony headlined the star-studded group. The “Redeem Team,” as it was dubbed, was expressly constructed to restore America’s basketball glory after a disappointing bronze finish in 2004. The 2008 team achieved its objective, defeating Spain in the gold medal game to reclaim America’s place atop the Olympic podium. Basketball fans were in awe of LeBron, Kobe, and the rest of the Redeem Team's dominance.

There’s one detail, however, that gets obscured when recounting the United States’ brilliance in Beijing. With 2:15 to go in the gold medal game, the Redeem Team was only leading Spain by four points. In other words, despite having more talent than nearly any basketball team in history, Team USA was in danger of losing the gold on the biggest international stage.

While the current iteration of the U.S. men’s national basketball team is not as lauded as the 2008 version -- the 2021 squad recently lost back-to-back exhibition games to Nigeria and Australia -- the Americans still have the most talented group in the field, by far. Given the immense NBA firepower on the roster and its superb coaching staff, the U.S. should handily bring home gold. That doesn’t mean it will.

(Editor's note: Team USA's 25-game Olympic winning streak was snapped in an 83-76 loss to France in the its opener on Sunday morning.)

The international game is just different, and that will organically create challenges for Team USA in subtle, yet significant ways. As soon as any U.S. Olympic basketball team steps foot on the floor, it faces headwinds that begin to mitigate its sizable talent advantage. That is something to monitor in Tokyo, where that advantage will not be as insurmountable for other nations as it’s been in the past.

One of the most basic factors that closes the talent gap between international teams and the United States is roster continuity. In formidable basketball nations like Spain, France and Argentina, top players make commitments to represent their countries over the course of their careers. These national teams are typically comprised of the same handful of elite players who grew up playing together and look forward to joining forces each summer to wear their country’s colors. Because of this stability, the transition from pro competition to national team competition is seamless. Instead of spending time feeling each other out and learning how best to cooperate, these groups are fine-tuning their attacks and focusing on their goals.

The United States system, by contrast, has so many extraordinary talents in the pipeline and offers so many off-the-court opportunities, that star players tend to cycle through the national program with higher velocity. Team USA has worked hard to prioritize roster consistency in recent years, but it still can’t match the commitment, unity and familiarity of its competitors. As a result, Team USA is usually at a connectivity disadvantage relative to its peers.

Another element that diminishes the United States’ talent edge is the natural unfamiliarity that homegrown NBA players have with the international game. Perhaps most notably, the spacing and physicality of FIBA competition are dramatically different than in the NBA. With a shorter three-point line that compresses the court, and no defensive violations to prevent defenders from packing the paint, there is considerably less room to maneuver in international play. And while officiating rules in the NBA protect offensive players, no such benefit is given by FIBA refs. Defenders are allowed to be more physical, which can be jarring to NBA stars who are used to going to the foul line after minimal contact.

Since referees give more freedom to defenders to obstruct movement, and since there is less space to create opportunities off the dribble, the value of the pass increases. NBA offenses often rely on pick-and-rolls and dribble drives, so this tactical nuance aids Team USA’s opponents, who are accustomed to playing the pass-first style that is favored internationally. On the defensive end of the floor, Team USA also faces an adjustment period; specifically, it needs to calibrate to the enhanced physicality of the international game. It’s an adjustment that other international teams don’t require, as all of their players developed in the FIBA system and have been programmed to know exactly how much defensive force they can apply in this setting.

Lastly, it cannot be overstated that each time Team USA takes the court at the Olympics and in other international competitions, it has a target on its back. The United States has been so dominant in basketball over the years that its losses are still newsworthy. The U.S. will always get its opponent’s best effort, whether it’s the gold medal game, the tournament opener or a closed-door scrimmage. There is never, if any, a margin for error, which week after week can create pressure on players as they fight to avoid upsets. If Team USA doesn’t come to play or has an off night shooting the basketball, it might be vulnerable against motivated and cohesive competition. One thing is certain: the rest of the world will show up when facing Team USA.

As the Olympic basketball competition starts in Tokyo, I have every expectation that the United States will bring home the gold. They are determined, have an excellent coaching staff and possess the physical ability, basketball IQ and technical skills that are second-to-none. Still, there are factors working against Team USA that are largely out of its control.

The international game is unique, and it’s played by teams who have passion, consistency and camaraderie. That combination helps create a series of small uphill battles for the Americans. Team USA’s amazing collection of talent should be enough to overcome these challenges; we should just be prepared that it might not be.

If the incomparable Redeem Team could be pushed to the limits by a worthy international adversary, then this 2021 team can be, too. And with a slimmer talent gap than we’ve seen in prior years, these external factors become particularly important.

In the end, they may just be a deciding factor when there’s gold on the line.