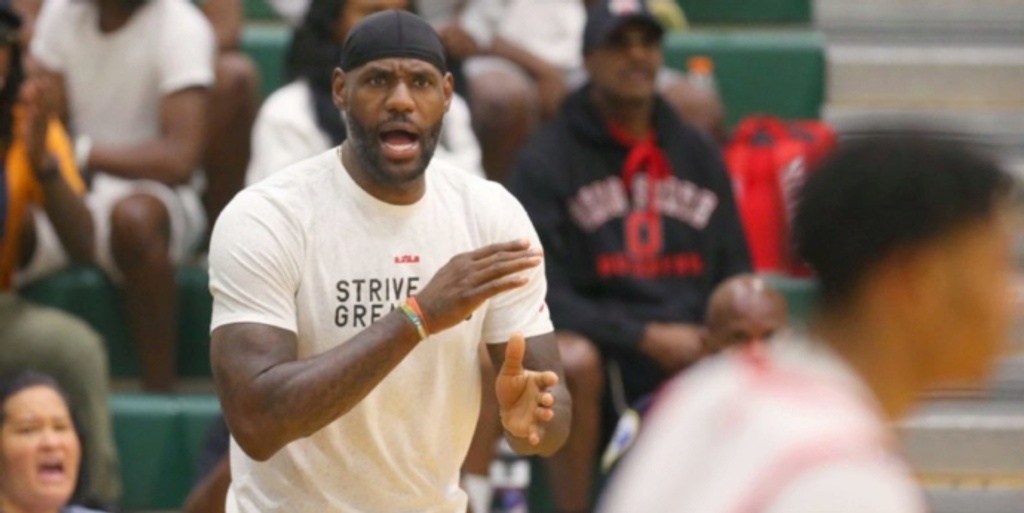 Why teaming up with Bronny could be LeBron’s greatest accomplishment

In today's NBA, we’re seeing more and more second-generation players. Stephen Curry is probably the most notable example, but Jerami Grant, Jalen Brunson and Jaren Jackson, Jr. are also the sons of former NBA players. And there’s a lot more of them out there.

Throughout the course of NBA history, there have been a lot of basketball dads, including some who were able to coach their sons. Doc Rivers coached his son, Austin, and George Karl coached against his son Coby.

However, there’s something we’ve never seen before, and that’s a teammate dad.

During All-Star Weekend, LeBron James admitted that he wants to become the first dad to play alongside his son, Bronny, and I'm hoping that we can witness that.

As athletes (especially NBA players) trying to win championships, we know that there’s only so much we can control. We can eat right, have the best habits and act as great teammates and good coaches. Winning is hard, succeeding is hard, and doing so for 20 years is damn-near impossible.

LeBron has done it, though.

A lot has to line up for that to potentially happen. LeBron is 37 years old and much closer to the end of his career than the beginning, but that’s why this is an incredible accomplishment and why it’s worth pursuing.

For Bronny, the NBA is the goal, and it’s not too far off.

If things continue to play out the way they have been, LeBron sharing an NBA floor with his son may actually be a reality one day. That’s not something that anyone could have ever imagined being possible, probably not even LeBron himself.

I also am a very proud basketball dad. My son Jace is about Bronny’s age, and as he’s grown up, Jace and I have had plenty of competitions, teaching moments and conversations about the chase to be great. Some of my fond memories from coaching in Cleveland are flashbacks of Jace and Bronny as young kids playing pickup and doing their own shooting drills in our practice gym. They were more interested in playing and getting better than they were watching us, so much so that they would be in the practice gym even while we had games going on.

I know what it feels like to watch your son grow up and try to follow in your footsteps. I also know that, for our children, it’s not easy.

If you follow me on social media, you’ve probably seen me retweeting things about Jace. Even though I want him to stay grounded, I also want him to know that I’m his biggest supporter.

As a basketball dad, I have to walk a fine line between being my son’s biggest motivator and his biggest critic. On one hand, as a former pro player, I feel like I can help to guide him and develop him, but on the other, I want him to understand that being a pro player's son is a bit of a burden that he’ll carry whenever he laces up his sneakers.

When Bronny, Jace and other players' children walk on the court, they may as well be wearing a target on their back. There are young, hungry players out there who look at kids like Jace and Bronny as opportunities to get some shine. That’s something they've got to be ready for.

At the same time, people are going to have high expectations for these young players, because if their dad played professionally, they'll be expected to have similar abilities. But not every kid can handle that, and a lot of them decide not to follow in their dad’s footsteps for that exact reason.

To this day, Jace hasn’t beaten me in a pickup game, and I’m damn sure never going to take it easy on him because I know nobody else competing against him will. I want him to stay humble and realize that the work never stops, and that just because he’s my son, it doesn’t mean things will be handed to him. If anything, it means he’s going to have to work that much harder.

Jace faces that as my son, and there’s really no comparison between LeBron and me.

When I watch Jace play, I try to make sure I never get too hyped up or too excited about the things he’s able to do on the court because I want him to maintain his edge and never be satisfied. That’s a challenge that we as basketball dads have — we’re constantly coaching and criticizing but always trying to stay positive and encouraging.

Why am I even saying all of this? Because basketball dads, particularly those who played in the NBA, have a unique perspective. When Jace picked up a basketball at 4 years old and decided he wanted to shoot hoops like his daddy, I couldn’t imagine being able to play with him as a pro. Part of that is because when Jace was born, I was about 10 years older than LeBron was when Bronny was born, but another part of it was that I just can’t say I envisioned being able to have the will, desire and good fortune to last in the league for as long as it would have taken.

Truth be told, it was probably hard for LeBron to imagine that too, which is probably why this has only become a conversation in the very recent past. But, because ‘Bron is still playing at such a high level, it feels like it’s close. How can we not be intrigued?

As a dad, there’s no better feeling than watching your child set a goal, commit to it and accomplish it. That’s not just in the world of sports, but in all walks of life. But man, I remember seeing Greg Anthony shed tears when his son Cole Anthony was drafted by the Orlando Magic, and I know that every other NBA dad felt the same way when their sons made it. They all know what their kids had to go through to get to that moment.

I can’t even begin to imagine what Bronny has had to overcome. I’m pretty sure LeBron knows, just like LeBron knows what he’s had to do to maintain his status as one of the top players in the league for so long. If the day comes where those two share an NBA court — and it’s obviously no guarantee — they will share one of the most incredible accomplishments the league has ever seen.

I, for sure, am rooting for it to happen.