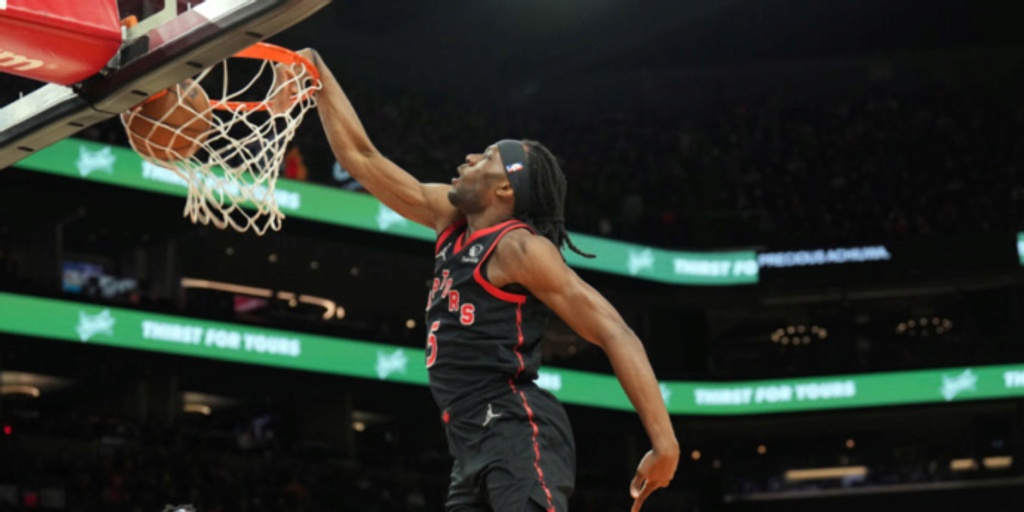 Why doesn't Precious Achiuwa start for the Raptors?

I tuned in late for Raptors-Suns on Friday night, but I knew I had to tune in.

A team with a diverse pick-and-roll offense featuring plenty of empty corner ball screens and Spain actions? And you're telling me they got to face off against one of the rangiest, switchiest teams in the sport?

The fourth quarter starts with Phoenix spamming three empty corner ball-screens, all headlined by Cam Payne. On the first, he comes off to his right and makes the one-pass-away swing to Landry Shamet for a contested triple. On the next trip, Payne flows into a contested pull-up with Fred VanVleet trailing him.

The shot misses, is rebounded by JaVale McGee, then kicked back out to Payne. They do the dance again, with Payne touching the paint on this one. A late switch is forced, with Precious Achiuwa picking up Payne on the drive. He contests vertically, but Payne gets a tough one to go.

My initial thought after the first minute of fourth quarter play: Wow, that was a pretty quiet start for Achiuwa.

And I meant it in a good way.

It's not easy to defend three empty corner actions in a row against an unpredictable spark plug like Payne, while also dealing with the prospect of a lob threat like McGee getting behind you. Those three trips ended with one shot at the rim made my brow raise.

(That also gives me an excuse to drop this: 40 players have defended at least 35 empty corner ball screens since the All-Star break; only four bigs — Joel Embiid, Isaiah Jackson (!!!), Bam Adebayo and Karl-Anthony Towns — have allowed stingier marks than Achiuwa, per Second Spectrum.)

It seems counterproductive to appreciate a quiet aspect of Achiuwa, but it's the mark of growth for Toronto's second-year big man.

The flashes have been loud; a grab-and-go sequence here; a thunderous swat there; a poster dunk, just for funsies.

But then there's the other side: the wild passes, the dribble-dribble-dribble-shoot isolations that garner slumped shoulders from his teammates, the eagerness against ball fakes.

It's too early to say Achiuwa has put it together, but his post-All-Star break stretch — and honestly, you can track the shift back a little further — has been a step in the right direction.

In nine games since the break, he's averaging 12.8 points and 6.4 rebounds in a shade under 23 minutes per contest. He has the second-best net rating (plus-1.2) among rotation regulars, trailing only Malachi Flynn.

In true Achiuwa fashion, his True Shooting percentage since the break is both underwhelming (53.6, below league average) and a massive improvement from his pre-break number (46.7). The boom in efficiency can be explained by his three-point shooting; he's drilled 46.2% of his triples on nearly three attempts per contest.

He's been fruitful from the corners, but there's a little bit of diversity present. He's firing off of pick-and-pops. He can space in the corner, but has also shown the willingness to relocate to remain in his driver's line of sight.

It would be irresponsible to dub Achiuwa as a mid-40s three-point shooter, but his comfort is worth monitoring. There's no hesitation in regards to the shot, and his footwork and shot prep are fine in multiple contexts. If he can cross the "reliable" threshold in the minds of defenses, that can open up his driving game.

Full disclosure: I have no idea what to make of it right now.

He has legit ball skills, and a first step that can best most centers in space. It helps him in grab-and-go situations after defensive rebounds, and there's potential worth exploring in half-court scenarios. This possession from Friday's action is ringing in my head.

That's Achiuwa popping, pumping, then attacking McGee's top foot and absolutely dusting him off the bounce.

That is also Achiuwa missing Thaddeus Young as Bismack Biyombo rotates over, then getting swatted at the rim as a result.

I'm not sure there's a larger gap between a player's perception and their percentages than Achiuwa at the rim. You'd think a guy with his athletic gifts and measurements would be an elite finisher, but yet:

Passing more would probably help these matters; he's only passing on 10% of his drives since the break, and rarely gives up the rock after offensive rebounds.

On the defensive end, Achiuwa has showcased high level potential. He's incredibly switchable, able to mirror wings and some guards in space while using his 7-3 wingspan as a buffer. Darius Garland didn't have the best time earlier this week.

That switchiness allows the Raptors to flatten actions in the half-court. Lineups featuring Achiuwa with their core four (VanVleet, Gary Trent Jr, Scottie Barnes, Pascal Siakam) have outscored teams by 5.5 points per 100 possessions behind a stingy defense. Opposing offenses have a three-point rate of 29.1 with that group on the floor, a mark that ranks in the 90th percentile.

While not a great rebounder himself, he does boost Toronto's rebound rate by nearly three percentage points this season. That number has become more stark since the All-Star break.

The case for starting Achiuwa is what he unlocks defensively, and how his open-floor handling can further help the Raptors push in transition. What's holding him back is his ability to cap or continue possessions — the finishing has to be much better, and his willingness to move the ball must improve.

I will say, Achiuwa doesn't seem far off. Even with his warts, he's clearly the most talented of Toronto's actual centers. He leads their big man room in fourth quarter minutes — late-game trust matters more than jump-ball responsibilities, anyway.

Keep an eye on him.