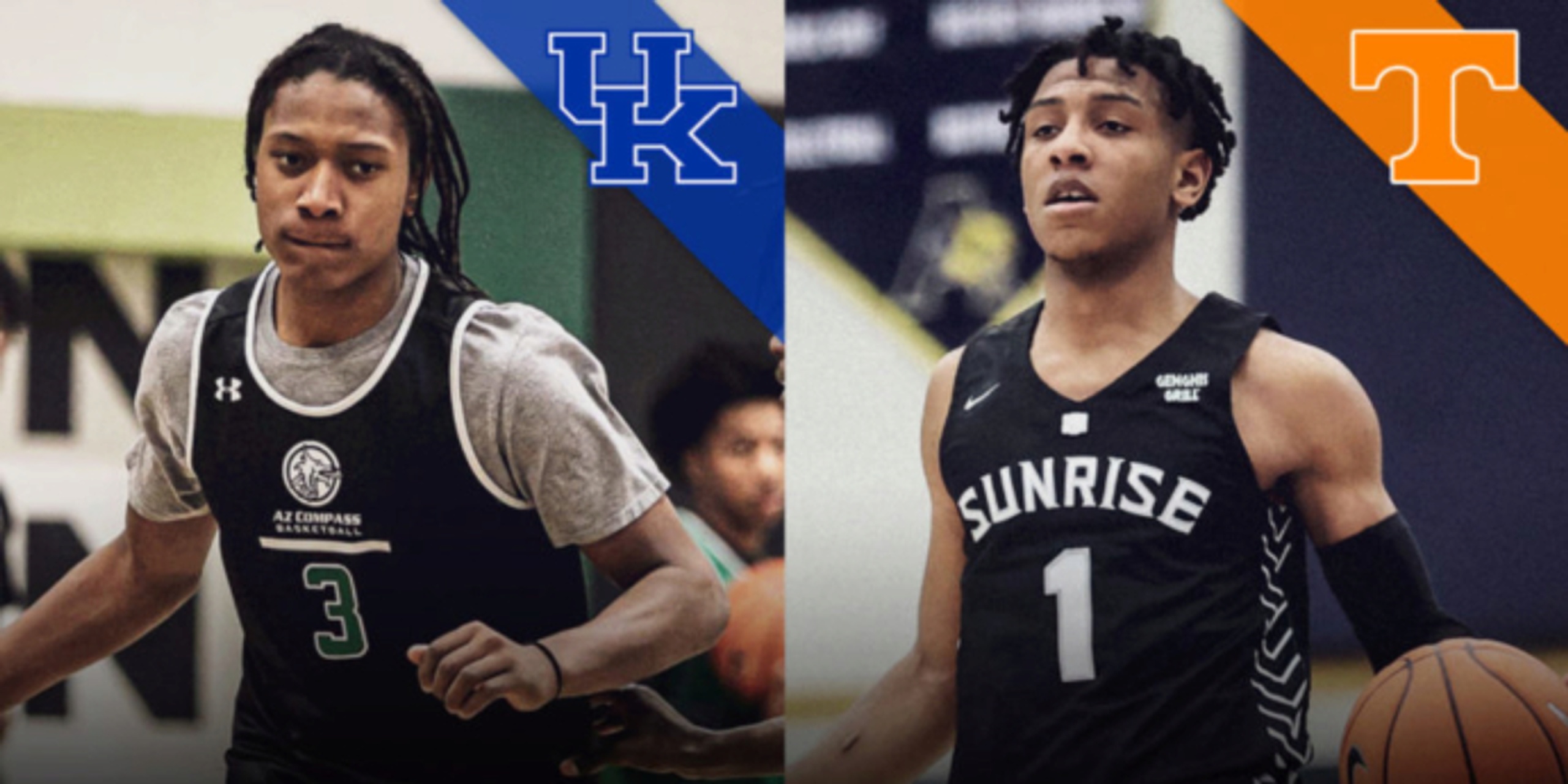 With the 2021 NBA Draft now in the past, I’ve turned the page to the 2022 NBA Draft. Our first big board hasn’t been released just yet, but I’m getting prepared for the upcoming season behind the scenes. In an effort to get prepared, I’ve begun to pencil in different tournaments, double-headers and matchups I’d like to attend throughout the college season. And although the dates have not been set, I can assure you I’ll be keeping an eye on when Kentucky and Tennessee will be playing each other.

John Calipari vs. Rick Barnes. Big Blue Nation vs. Rocky Top. Two of the top recruiting classes and teams in the country. That narrative alone is enough to drive widespread excitement.

However, I’m most excited about this matchup mostly because it will pit potentially the top two point guards prospects, TyTy Washington of Kentucky and Kennedy Chandler of Tennessee, against one another.

Let’s start with TyTy Washington. I first saw him play at the Pangos All-American Festival last year in Phoenix, Arizona around early November. During that camp, I took notice of TyTy, but I did not see him as a sure-fire NBA prospect... yet. In hindsight, I think he was overshadowed by hyped-up prospects like Chet Holmgren, Paolo Banchero and Jabari Smith.

The narrative changed for me on March 8 at the Flyin’ to the Hoop Top Gun Showcase in Dayton, Ohio, where I saw TyTy and AZ Compass Prep dominate Emoni Bates and Bates Fundamentals.

Following that game, I noted my observations:

“I was extremely impressed with AZ Compass Prep’s team as a whole, but what really stood out to me was TyTy Washington’s talent. At 6-foot-3 or so, TyTy, although a good athlete, didn't blow me away with elite athleticism or any typical traits you generally see with top-tier prospects. However, his outside shooting, court vision, toughness and, most importantly, his floor presence did — he’s clearly a winner. TyTy was the floor general and set the tone for their team as they moved the ball, took great shots and supported one another. And as a result, they put a thumping on Ypsi Prep. Emoni Bates only scored two points, as AZ Compass Prep won in a blowout.

“Walking out of the gym, my colleague and I looked at each other, both nodding in approval of what we had just witnessed. He asked me, 'Who does TyTy remind you of?' I said, 'He’s just a young kid and he needs to keep getting better, but he reminds me of Chauncey Billups.'”

I was shocked that TyTy hadn’t received more attention and wasn’t considered a top prospect in the high school class of 2021. However, it seemed that as I took notice of TyTy, so did the rest of the basketball world simultaneously. Shortly after my trip to Ohio, TyTy de-committed from Creighton and skyrocketed up player rankings. During that time, I flew to Phoenix to watch TyTy and AZ Compass Prep practice for several days. I had the opportunity to get to meet TyTy, his family and his coaches. After talking to them, it seemed as if the whole world was knocking their doors down. I joked with TyTy, as I called him Jesus Shuttlesworth.

Despite being recruited by nearly every top college program in the country and supposedly receiving lucrative offers from professional teams overseas, on May 12, TyTy committed to head coach John Calipari and the Kentucky Wildcats. A seemingly perfect fit, in my opinion.

As a part of my evaluation process, I organize positional rankings for internal use. After TyTy’s sudden emergence, I knew that I needed to move him way up. However, I found myself in a dilemma when trying to decide where to slot him exactly, as there is another very good point guard from the high school class of 2021: Kennedy Chandler.

In Jan. 2020, I made a trip to Memphis, Tennessee, where I had the opportunity to watch a couple of prospects that went on to be selected in the 2020 NBA Draft: Anthony Edwards of the Georgia Bulldogs (No. 1 pick, Minnesota Timberwolves) and Precious Achiuwa of the Memphis Tigers (No. 20 pick, Miami Heat — recently traded to Toronto Raptors).

Prior to that game, a friend of mine asked if I would sit down with Chandler, the top high school player in the Memphis area, and his dad, Kylan. I agreed, of course. The three of us talked about college recruiting, the NBA Draft and my processes for evaluating prospects, among other things. I had not seen Kennedy play at that point, so my advice to him was pretty generic. After the Georgia vs. Memphis game, I joined them at their home for a barbeque. I had a nice time visiting with them. They are good people.

I had a nice time catching up with 5-star point guard Kennedy Chandler and his father Kylan this morning.

Kennedy is a terrific kid and a major talent. We will certainly be keeping a close eye on him. pic.twitter.com/Z11gae1CSI

Luckily, I was able to see Kennedy play the next day at the Memphis Hoopfest, a high school tournament in the area. In addition to seeing Kennedy, I was also able to see 2021 NBA Draft picks Cade Cunningham (No. 1 pick, Detroit Pistons), Moses Moody (No. 14 pick, Golden State Warriors) and Day’Ron Sharpe (No. 29 pick, Brooklyn Nets).

As for my initial evaluation of Kennedy, the first thing that I noticed was his lack of size. He is listed as 6-foot-1. However, once the game started, it was clear why he was so highly rated, despite his lack of height. Possessing waterbug-like quickness, threatening burst and superior cerebral nature, Kennedy ran the show for his team, Briarcrest Christian. I was intrigued, to say the least.

After the game, I was complimentary to both Kennedy and his dad. I encouraged Kennedy to keep working to improve his physical strength and outside shooting. I told them I would keep a firm pulse on Kennedy’s development, which I have done.

In early April, I attended GEICO Nationals in Fort Myers, Florida. Although their teams never faced each other, I had several days to evaluate both TyTy and Kennedy more. Both players continued to impress, and subsequently added fuel to the fire in regards to my internal debate as to which point guard I preferred more.

Although I have a lot of confidence in both TyTy and Kennedy as prospects, I must admit that I’m ultimately undecided on who I am going to rank higher. There’s a legitimate competition for the top point guard spot, in my opinion, and these two just happen to be playing for two of the top schools in the SEC that will face each other twice this upcoming season.

Is there a potential rivalry brewing? Perhaps.

Knowing what I do about both of these players, I doubt either will shy away from the competition.

Needless to say, I’ll be watching closely. I suggest you do the same.