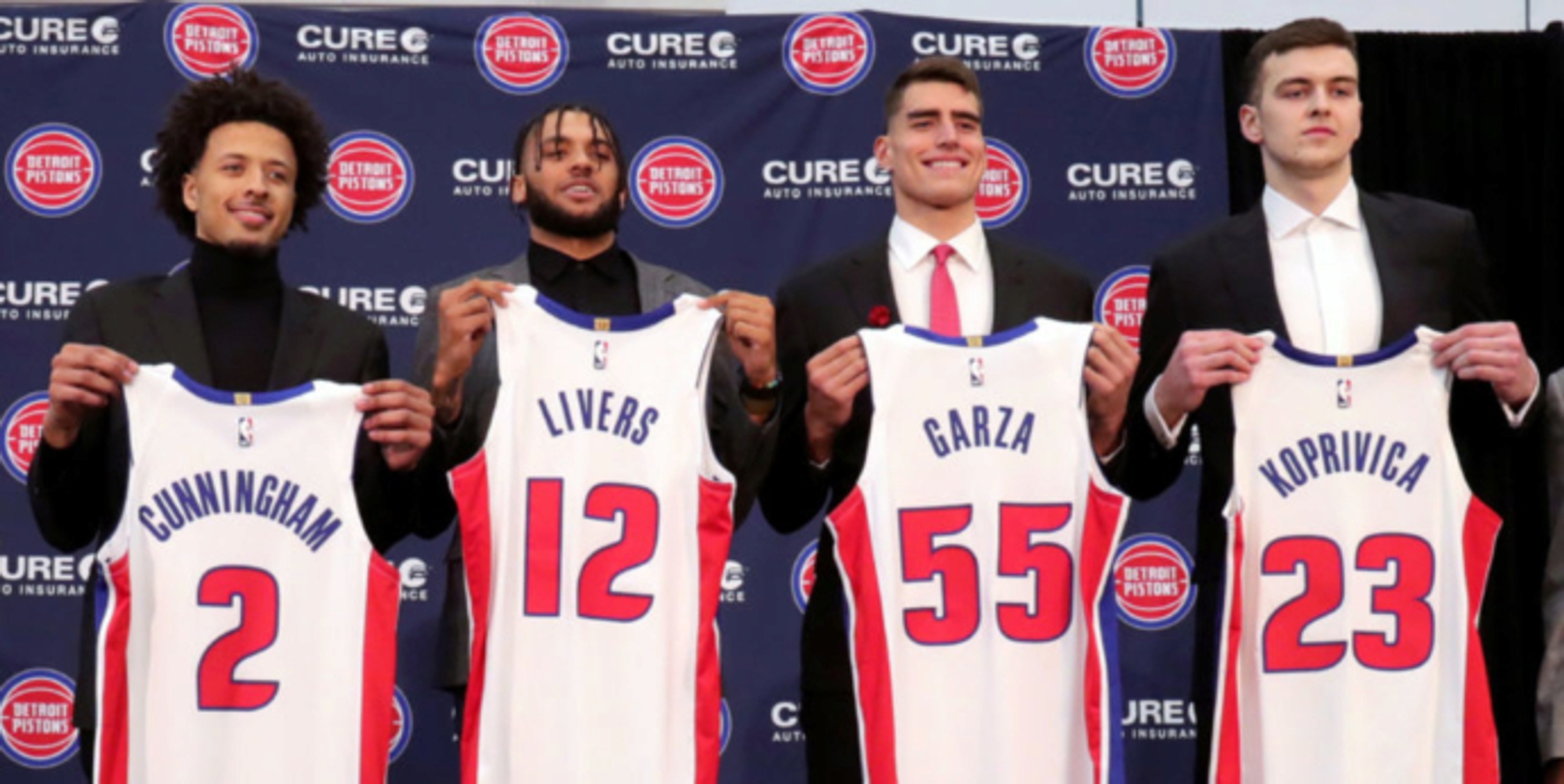 Who are the must-watch Summer League teams in Las Vegas?

After a pandemic-induced hiatus, the NBA’s Las Vegas Summer League returns. And with that comes the most electric small sample of inconsequential games on the league calendar.

The 2021 draft class will don NBA jerseys for the first time, and most of the 2020 class will finally receive a real training ground after missing out last season. With so much young talent descending on Las Vegas, every single team has multiple storylines to follow.

But fans also have the final few weeks of their summer to savor. So while I'll surely be watching as many games as possible, what teams should be considered appointment television? What rosters are chock full of prospects and intrigue?

Below are the eight "must-watch" teams of 2021 MGM Resorts Summer League, with a complete schedule included here.

As with every year of summer league, the No. 1 pick in the NBA Draft immediately grabs headlines as a player to watch. And everyone expects big things from Cade Cunningham, who is largely considered to be one of the more polished prospects in recent memory.

However, it's not just Cunningham who makes this an exciting roster. Second-year forward Saddiq Bey joins the squad after landing on the All-Rookie First Team last season. Saben Lee turned heads as a second-round rookie. Killian Hayes is out to prove himself after injuries hampered the seventh overall pick of the 2020 draft. Sekou Doumbouya has some asserting to do as well, having yet to make a major leap since being drafted 15th overall in 2019.

You won't see Isaiah Stewart, Isaiah Livers or Chris Smith in action; they're reportedly not playing due to injuries. But there's simply so much talent and intrigue, even without those three. This could be a rare summer league team that could both win games and introduce the masses to some notable young players.

Until July 29, the Rockets had not made a first-round pick in the NBA Draft since selecting Sam Dekker all the way back in 2015. This year they picked not once, not twice, but four times in the first 24 selections.

All four choices — Jalen Green (the No. 2 overall pick), Alperen Sengun (No. 16), Usman Garuba (No. 23) and Josh Christopher (No. 24) will suit up in Vegas. They represent the future of the franchise and the first first-round picks by general manager Rafael Stone.

Don't forget about uber-athletic K.J. Martin, son of NBA veteran Kenyon Martin, and his quietly-successful rookie season, either. He could make some of the highlight-reel plays of the tournament.

The Grizzlies might be my early pick as Las Vegas Summer League champs. Desmond Bane is frankly too good to be here. After making the All-Rookie Second Team last season and emerging as one of the better shooters in the entire league, Bane could eviscerate the younger opponents he'll face.

He'll be joined by three other 2020 draft picks in Xavier Tillman, Killian Tillie and Sam Merrill, who was recently acquired in the trade that sent Grayson Allen to Milwaukee. As far as summer league goes, this should be one of the more experienced squads in Las Vegas.

Toss in two first round picks in Ziaire Williams (No. 10) and Santi Aldama (No. 30) as well. Both were picked at least six spots higher than BasketballNews.com draft analyst Matt Babcock predicted before draft night. Time will tell if they were the right choices, but both can make a strong first impression at summer league. If undrafted rookie Yves Pons is doing stuff like this, he's another one to watch.

Orlando was one of two teams with multiple lottery picks in this summer's NBA Draft. Both Jalen Suggs (the No. 5 pick) and Franz Wagner (No. 8) will make appearances as two potential cornerstones for the franchise.

Suggs in particular should garner interest because he joins a crowded lineup of young, exciting guards in Orlando. Viewers will see two of the others in Cole Anthony and R.J. Hampton. How will the Magic balance minutes in the early going? Will any of the three separate themselves from the pack? How often will Orlando try a three-guard lineup?

Those are just some of the questions that first-year head coach Jamahl Mosley will eventually have to answer.

Are Moses Moody and Jonathan Kuminga ready to join a rotation with win-now expectations? That's the central question for Golden State ahead of summer league. Both prospects had rocky-yet-promising debuts in the California Classic. Moody dropped 19 points (7-for-18 shooting) to go with seven rebounds, while Kuminga logged 18 points (7-for-14 shooting) and three rebounds against six turnovers.

As the No. 7 pick, Kuminga is theoretically a long-term upside play. Moody (No. 14 pick) is typically viewed as a safer, more NBA-ready prospect, but he too is a one-and-done wing. Even as Stephen Curry, Klay Thompson and Draymond Green push for a championship, these two shouldn't be forced into action. They'll grow at their own paces; summer league serves as a starting point.

Gary Payton II is the third player to focus on. According to Drew Shiller of NBC Sports, the Warriors have until Aug. 11 to waive the guard before guaranteeing $659,000 on his contract. We'll see how that plays out as Payton goes through the next 10 days.

The Hornets garnered widespread praise for their 2021 NBA Draft. Charlotte came away with a dynamic scoring guard in James Bouknight at No. 11, and then grabbed two high-upside talents in Kai Jones (at No. 19) and JT Thor (who is not in the above graphic but will play) at No. 37.

I'll be especially intrigued in seeing just how NBA ready Jones and Thor appear to be. The Hornets don't have to rush either prospect and could opt to send them down to their G League affiliate, the Greensboro Swarm. If they do flash skill at summer league, though, they could eventually become exciting targets for LaMelo Ball.

And speaking of Ball, his brother LiAngelo will probably have his best shot at making the NBA this week. His name alone creates another storyline to follow, as LiAngelo hopes to follow his two brothers into stardom in the Association.

Cleveland is the only team in the NBA carrying two top-5 draft picks into summer league. Evan Mobley — a unique blend of size, speed and skill and this year's No. 3 pick — is certainly the headliner. Mobley has a ceiling as high as any in this draft class, and this week will give the first glimpses at how Cleveland looks to optimize him.

The other is Isaac Okoro, who started all 67 of the games he played last season. His usage rate was low, though, and the fifth overall pick in the 2020 draft struggled with shooting efficiency as a rookie. He made just 29% of his three-pointers and had a true shooting percentage of just 51.4, which is relatively poor. He can demonstrate improvement in this setting while getting more touches and the chance to showcase his defensive prowess.

One other player I'd keep an eye on is Mfiondu Kabengele. The Cavs signed him outright in May after playing through two 10-day contracts. Kabengele is a 2019 first-round pick who never clicked with the Clippers, so this could be a good place to start fresh.

Moses Wright will no longer be with the Raptors in Vegas. Became uncertainty as other moves were made and he'll opt for a different situation. (Not uncommon.) pic.twitter.com/lRcbGUWYrL

Kyle Lowry's departure signals a new era in Toronto -- one currently centered around Pascal Siakam, Fred VanVleet and OG Anunoby. Though they've graduated from summer league reps, fans will get to see three more key pieces that could define the franchise's future.

Toronto caught most draft analysts off guard by selecting Scottie Barnes with the fourth overall pick, but make no mistake, Barnes is a versatile forward whose combination of athleticism and processing speed will be on full display in Las Vegas.

Though Precious Achiuwa is not listed above, the second-year center will also be with Toronto after coming over from Miami in the Kyle Lowry sign-and-trade. Although the league has reportedly opened a tampering probe against the Miami Heat, at this time, there’s no reason to believe that Achiuwa won’t be in uniform for Toronto.

Fellow 2020 first-rounder Malachi Flynn will likely run the summer league offense in hopes of staking his claim as the Raptors' third guard in the rotation.

Newly-extended Masai Ujiri will surely keep a close eye on the three prospects as he ponders the identity of Toronto's next iteration.

After a one-year hiatus, it’ll be nice to have summer basketball back. And without question, these are the teams that I’ll be keeping a close eye on.