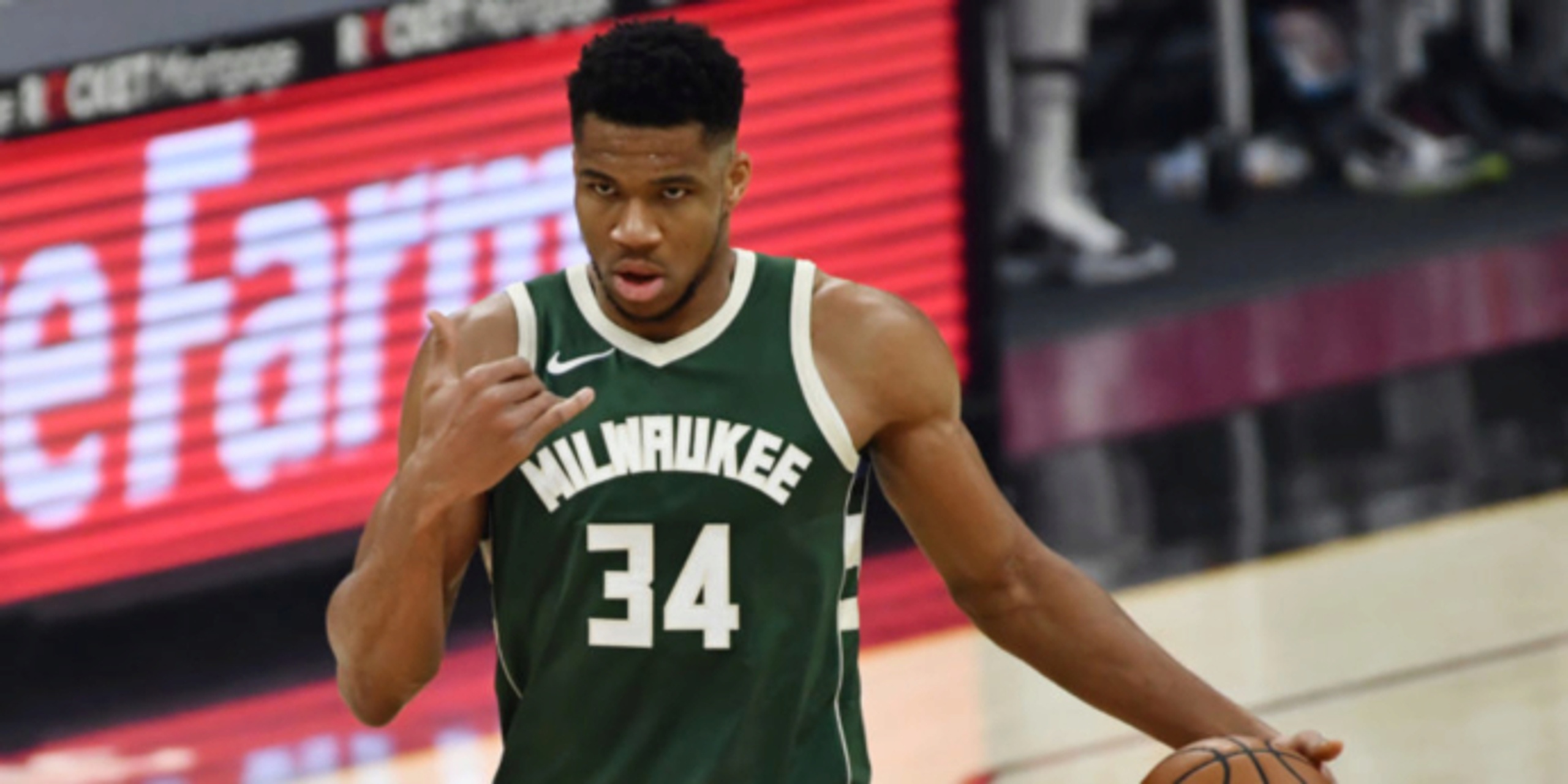 What surprises await when the NBA season resumes?

Nobody could have predicted Giannis Antetokounmpo making all 16 of his shots on Sunday night to win MVP honors at the 70th NBA All-Star game. Interestingly enough, the contest didn’t turn out all that bad, especially with Steph Curry and Damian Lillard doing their “Can You Top This?” routine with heaves from the midcourt area…

Antetokounmpo doubled the best perfect from-the-field performance in All-Star history, topping Hal Greer of the Philadelphia 76ers, who was was 8-for-8 in the 1968 All-Star game. It’s safe to say that nobody saw that coming.

And that brings us to what has been the theme of NBA basketball over the past year since the Utah Jazz’s Rudy Gobert tested positive for coronavirus and the league quickly shut down.

If you expect the unexpected, you will not be surprised.

Take Sunday afternoon, for instance. Everyone in Philadelphia was looking forward to Joel Embiid and Ben Simmons being a part of the NBA’s signature midseason event, and then… Bam. Contact tracing. Both were sent home. No replacements could be brought in, and the game was played with 11 players on each side.

Both Sixers must now go through five straight days of negative COVID-19 tests before they become eligible to play, and Doc Rivers said he believes the count on that five-day waiting period began Saturday, although he could not say so with any degree of certainty.

Assuming Rivers was correct, the Sixers' All-Stars will be available Thursday night when Philadelphia travels to Chicago to play the Bulls, who won six of their last nine games before the All-Star break. But if Rivers was wrong and Simmons and Embiid remain unavailable, that creates a mess for him to manage.

“We start on the road, back-to-back games, with one practice. That's a challenge in itself, right?” Rivers rhetorically asked after Sunday’s game. “Then, obviously, not having those guys, that's a lot of points, our two best defenders. So, obviously, it would hurt.”

A win by the Nets on Thursday against Boston and a loss by the Sixers would put Brooklyn atop the Eastern Conference standings, and we can pretty much expect those two teams to continue to battle for first place throughout the remainder of the regular season, which runs through mid-May.

But what about Giannis and the Bucks, who were considered a championship round shoo-in this time a year ago? If not for a five-game losing streak that began Feb. 12, they would be a bigger part of the national discussion on which team will come out of the East. Nobody could have predicted that long of a losing streak for Milwaukee, but again... The theme here is “nobody could have predicted.”

But alas, this being the NBA, we try anyway.

Milwaukee won six of seven going into the break and now heads into a particularly tough stretch of schedule. The Bucks’ next 12 contests, a stretch that concludes with road games against the Clippers, Lakers and Blazers, includes two games against the Knicks, two against the Celtics and one each against the Sixers, Pacers and Spurs.

Call it a barometer stretch in which we’ll get a chance to take their temperature.

Antetokounmpo, a career 28% three-point shooter, went 3-for-3 in the All-Star game. And the Bucks are the NBA’s fourth-most accurate team from three-point range, still adjusting to having Jrue Holiday rather than Eric Bledsoe as their floor leader. With the lack of practice time that has hampered all 30 teams, regular-season games are serving that purpose.

With the trade deadline still about two weeks away, we are about to enter the NBA version of March Madness, which means there will be rumors galore, some of which will pass and some of which will fail the smell test. But there are going to be deals made before the end of the month, and rosters are going to look different. Remember how Jarrett Allen was once going to be the Nets' center for the next decade?

Okay, good. You get the picture.

Allen is now going to be a long-term fixture in Cleveland, and Blake Griffin is going to be the newest Brooklynite taking direction from Steve Nash, drawing comment from James Harden.

“If he passed up more money to obviously stay in Detroit, he wants to win, and he wants to have an opportunity to play meaningful minutes. I'm assuming that's one of the reasons why he came,” Harden said on Sunday.

“Obviously, we know the athletic and high-jumping Blake, but I think as of these last couple years, he's knocking down the three ball a little bit better, ball handling is a lot better, and he can be a great contribution to this team.”

In the West, we have a Utah Jazz team that gets little national attention (although Shaq has been touting them on TNT) but has made more three-pointers (615) than anyone else, hitting 39.8% of their looks. Brooklyn is second with 567 makes, and Portland is third with 566.

Like Curry and Lillard last night -- though not to that extreme of a degree -- the Jazz players are playing a game of “Can You Top That?” on a nightly basis. They had 21 three-pointers in their final game before the break (a loss to the Sixers), and on some nights, take more threes than twos.

Despite losses in three of their four most recent games, the Jazz lead the West by 2.5 games over the second-seeded Phoenix Suns, who entered the break on a four-game winning streak of their own. That coincided with swoons by the Jazz, Lakers and Clippers. 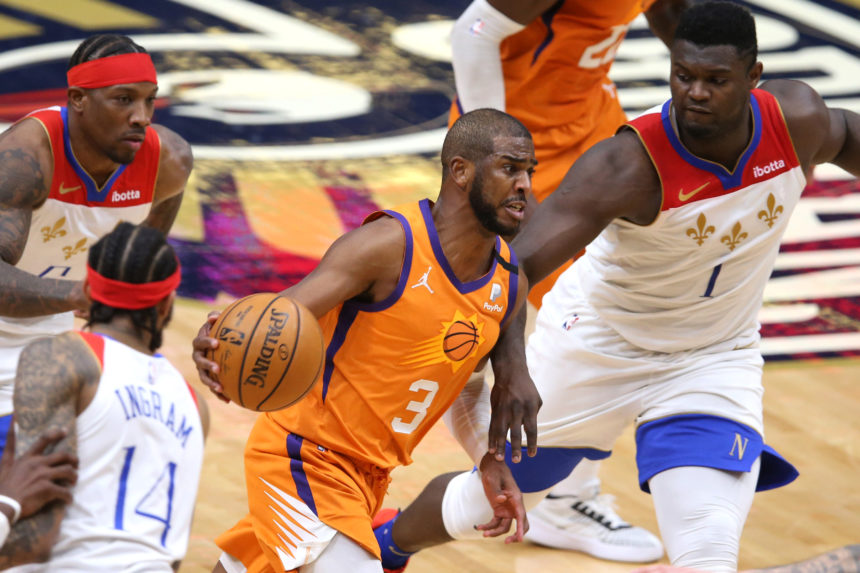 Remember when the Suns went 8-0 in the bubble and we all felt it was unfair that they were not rewarded for that? Well, they added Chris Paul (who was a plus-26 for Team LeBron in the All-Star game) and Jae Crowder this past offseason. They then went into the break by beating the Lakers by 10 points and the Warriors by 22, and since Jan. 28, they are 16-3. They also begin the second half of the season with a bit of a cupcake schedule.

Although Doc Rivers may have a higher profile, Monty Williams is in competition for Coach of the Year honors.

The same can be said for Tom Thibodeau, whose Knicks do not shine as brightly as the Nets in the East, but who entered the break with wins in four out of their last five games. After returning from a Saturday afternoon game at Oklahoma City next weekend, the Knicks will have to get on an airplane only twice more in March, once for a road game at Milwaukee on March 27, and one more time for a single-game road trip to Minnesota on March 31.

By the time the Lakers come into New York on the weekend of April 9 for games at Madison Square Garden and Barclays Center, we should know two things: Whether LeBron’s four-point All-Star game was an aberration (99% chance it was), and whether Knicks fans remember how to chant anything other than “Sell The Team.”

So yes, there are some magnificent storylines developing around the league, and we are only halfway there. Although our NBA body clocks tell us that we should be six weeks away from the start of the playoffs, we are going to have to reset them because the regular season started late and will end late.

On the bright side? The end of May and the entire month of June will be super cool, with every game meaning something, just like in the good old days of the bubble (it seems cruel to write that, but it’s true). So buckle up and expect the unexpected.

As Giannis’ 16-for-16 game showed us, unbelievable nights can happen at any time and any place, and it should be noted that there were fans in the stands in Atlanta. We could not say that on opening night.

We are all getting closer to normal, and in the NBA, the abnormal is what makes all of us adrenaline junkies.

Here’s to hoping we keep getting that juice.

MORE:
NBA
NBA
NBA News

Steph Curry: 'I have a lot to accomplish; I don’t have anything to prove.'
Will Bynum carving out role as impactful NBA skills trainer

Featured News

NBA Expansion Mock Draft: What would a new expansion team look like?
22h
What is the ideal slate of NBA games for Christmas Day?
17h
NBA passes 70 million Instagram followers, ranks top-10 among brands
2 days
How can the Thunder and Shai Gilgeous-Alexander balance their needs?
2 days
Tom Izzo agrees to five-year rollover contract with Michigan State
3 days
Bill Russell’s No. 6 jersey to be retired throughout NBA
3 days
How Rudy Gobert and Karl-Anthony Towns can work as Timberwolves' duo
3 days
Subscribe to our newsletter
SUBSCRIBE
Follow Us



Basketball News
Home
Podcasts
Scores
Draft
Stats
News
Charts
Contact
Contact Us
Advertise With Us
Terms Of Use
Privacy Policy
Do Not Sell My Personal Information
Cookie Policy
Download Our App!
Stay up-to-date on all things NBA
Copyright © BasketballNews.com 2020. All Rights Reserved.
