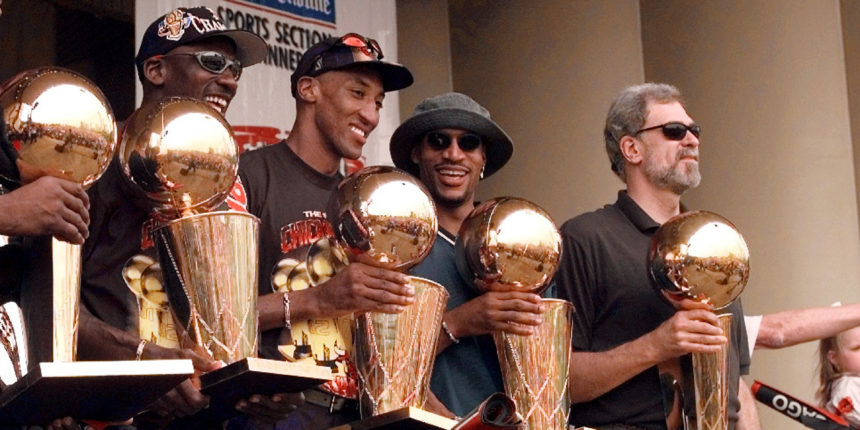 In a recent GQ interview, Pippen said that Jackson's decision to give Toni Kukoc the final shot in a 1994 playoff game was "a racial move to give [Kukoc] a rise." When Dan Patrick said that this comment makes it seem like Jackson is a racist, the seven-time All-Star agreed with that characterization.

Patrick tried to give Pippen an out, but he doubled down.

"I was in the locker room with him, I was in practices with him; you're looking from afar," Pippen said.

DP: ".. By saying it was a racial move then you're calling Phil Jackson a racist..."

Pippen: "I don't have a problem with that."

Exchange with @ScottiePippen on Phil's decision to have Kukoc take final shot against the Knicks pic.twitter.com/pH2aDLMDcQ

In 2016, Jackson received backlash when he referred to LeBron James' associates as his "posse," which James called out as racist language.

"It just sucks that now at this point, having one of the biggest businesses you can have both on and off the floor, having a certified agent in Rich Paul, having a certified business partner in Maverick Carter that's done so many great business [deals], that the title for young African-Americans is the word 'posse,'" James said. "To use that label, and if you go and read the definition of what the word 'posse' is, it's not what I've built over my career. It's not what I stand for, it's not what my family stands for. I believe the only reason he used that word is because he sees young African-Americans trying to make a difference."

Pippen also criticized Jackson for writing his tell-all book ("The Last Season") in which he blasts some of his former players (particularly Kobe Bryant) and shares private stories.

In the same interview, Pippen was asked about Michael Jordan's decision to leave the Bulls to pursue a baseball career in 1993. Pippen said, "It was a selfish decision, but it was kind of who Michael Jordan was."

"Yeah It was a big decision, but It was a selfish decision, but it was kind of who Michael Jordan was. That was a guy who believed he can do anything on his own"

-@ScottiePippen on Michael Jordan's decision to leave the #Bulls and pursue a baseball career pic.twitter.com/PoHFAIjqgc

At one point during the interview, things get somewhat awkward between Pippen and Patrick; Patrick is silent and seemingly isn't sure how to respond, so Pippen sarcastically asks, "Do you speak English?"

Pippen has been making the rounds to promote his new brand of bourbon called Digits and an upcoming memoir ("Unguarded"), which may be why he's suddenly speaking out on these topics.