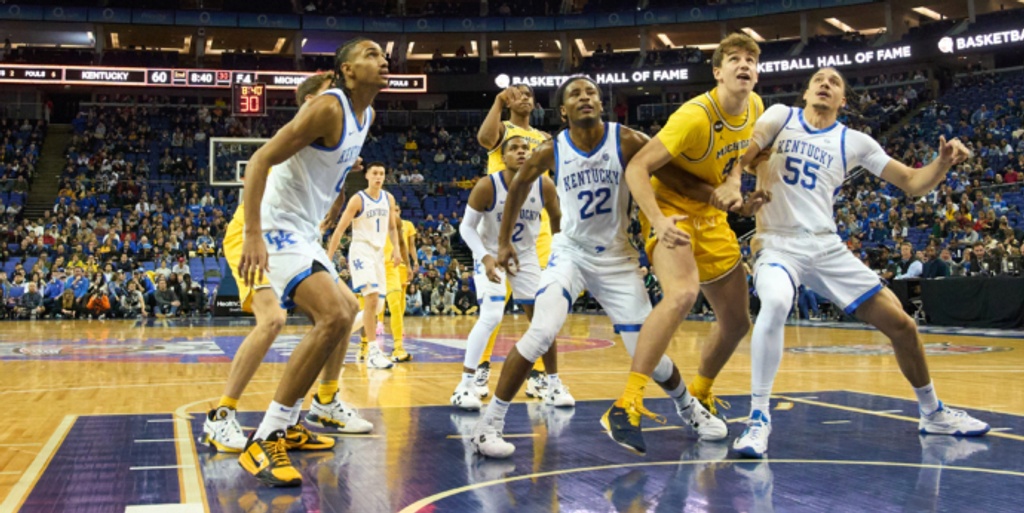 LONDON (AP) — Kentucky and Michigan finally played their London game, but organizers aren’t exactly running a fast break to get back to the British capital.

The Basketball Hall of Fame London Showcase was delayed because of the coronavirus, and Sunday’s game tipped off an hour before England played Senegal for a spot in the World Cup quarterfinals.

“Two years ago, we were supposed to be here — and now the World Cup. We’ve certainly had our hurdles,” said John Doleva, president and CEO of the Basketball Hall of Fame.

The Wildcats beat Michigan 73-69 in the marquee game at O2 Arena before 8,242 fans as part of a doubleheader that featured Marist against Maine earlier.

That’s less than half the sold-out crowds of the regular-season NBA games held at the O2 between 2011 and 2019 — and the NBA has since switched its annual Europe game to Paris.

Doleva said 10,000 would have been a “tremendous success” and that the eight-thousand range is still a victory considering most English sports fans were watching their team’s 3-0 win over Senegal in Qatar.

A return to London is possible, he said, but they’re looking at other European cities, too, and probably not for next season.

“It could be London, it could be Paris,” Doleva said. “I can’t say that this is going to be happening every year. We’ll look at that as we go forward, but we pretty much know that it’s not going to happen next year because the planning cycle is so long.”

Both coaches praised the cultural experiences for the players, who did some sightseeing and stopped by soccer club Chelsea’s stadium, Stamford Bridge, for a tour.

“I’m sure a lot of folks were at home or in pubs watching the football match,” he said. “Overall, it would have been great if we had could have had more fans (here).”

Maine guard Gedi Juozapaitis did his part — the London native had family and friends watching from the stands.

“This was the first time they’ve seen me play live since I left (for the U.S.),” the senior said.

Kentucky and Michigan each received $500,000 for the game but had to pay their own expenses, Doleva confirmed.

“These are two marquee teams. We want to make sure that we’re bringing great basketball to wherever we go,” he said.

The Hall of Fame had originally hoped to fill the vacuum left when the NBA switched to Paris.

“With COVID, we got a little bit knocked off kilter,” Doleva said. “It has to be a few years in advance, and during the COVID cycle we just didn’t have a chance to do that, to talk about international trips.

“It’s a big project to take four teams to a foreign country. We have to make sure that the teams and the timing is right.”