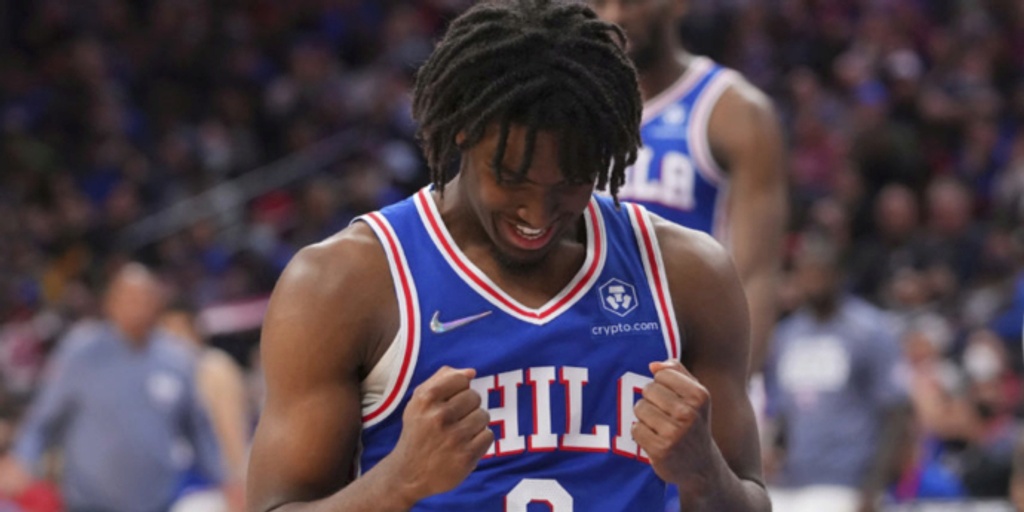 Tyrese Maxey has taken the Sixer reins in rapid fashion

It's easy to get caught up in the Ben Simmons situation. Debates about which side should earn sympathy rule the national consciousness.

(Okay, maybe not, but it's the closest thing we have to a hotbed issue in the NBA on the East Coast. Portland and Phoenix need not apply.)

As exhausting as the drama has been to follow, it's important not to lose track of how good the Sixers have been in spite of it. They're 8-5, essentiallly a random night of basketball results away from being the top seed in the Eastern Conference again.

If there's anyone who has actually benefitted from the Simmons ordeal, it's Tyrese Maxey. The second-year guard has gone from bench spark to starter in a matter of months. For a young guard to have the sort of shift in role, responsibility and opposing talent faced as Maxey, you'd expect some massive growing pains.

Not only has Maxey mostly bypassed those pitfalls, he's been straight-up balling as of late. You're seeing consistent growth from him on the court (more on that shortly), and it's showing up pretty clearly statistically.

His per-game numbers have skyrocketed. After averaging 8-2-2 in 15.3 minutes as a rook, Maxey is slapping up a 17-4-5 line in just under 36 minutes a contest. Split up his season, and the growth becomes even more apparent.

There's been quite the jump in his last five games. It makes sense considering he's had even more thrown on his plate with Joel Embiid and Tobias Harris (among others) missing time during the stretch. His minute load has ballooned over his last five games (41.4 minutes) in comparison to the rest of the season (32.2 minutes).

No matter. Maxey has not only accepted the heightened usage, he's handled it in an efficient matter.

The Maxey Experience is a fast one; you'll miss it if you blink. It's a gift and curse for guards of Maxey's ilk. On one hand, it's insanely difficult to deal with turbo-charged guards, and they know it. They operate in fast-forward mode, speeding around picks and getting to their spots before their defenders can decide on a path of screen navigation.

You try to duck under picks against these guards, and sometimes they'll use the gap as a runway instead of a deterrent. You fight over, and you're already dead.

Maxey is an infuriating cover in this regard. It mostly shines through in the open floor, where Maxey is generating nearly 1.2 points per possession as a scorer in transition per Synergy. The combination of speed, nimbleness and touch make for some exciting finishes.

You'll also see it in the half-court. Maxey can jet off screens or, after forcing a switch, pull the ball out and blow past helpless defenders in space. It's more devastating when Maxey is able to play off the catch. Give him a scramble to attack, and there's nearly no chance for a defender to shift his weight enough to contain him off the bounce.

The challenge for Maxey (and guards like him) is multipronged. It's obvious to point out that Maxey can't go 100 miles per hour all the time; the difficulty is shifting speeds physically while still trying to process the floor as quickly as possible.

As fast as Maxey is, as quickly as he can get downhill, there were many instances last season where the processing speed lagged behind. He'd receive the ball in a swing-swing scenario and pause a bit to survey his best option. Some of it was adjusting to the speed of rotations and general defense-reading; some of it was a hesitancy to fire from deep.

Good news, Philly fans: Maxey is mostly nailing it to this point of the season.

While he has the tools to be a walking paint touch, he showcased a high-level counter in Year 1: his floater. He isn't taking them with the same frequency as he did last season, but his 52% clip on runners this season shows that it's still very much in his bag. That's nothing new.

What's new is Maxey's willingness to fire from deep. He's taking catch-and-shoot threes with more confidence; it helps that he's also making them at a solid rate (39.1%). After taking 35 pull-up threes last season, Maxey has already taken 19. It's going to take a larger sample for Maxey to become scheme-proof as a shooter, but the increased comfort is a good sign.

The next step from Maxey will come as a playmaker. He's a smart decision-maker — turnovers are bad, folks, and he doesn't turn it over! — though there's a level of conservatism that caps him as a playmaker.

He's much more comfortable with exterior passes than interior ones. About a third of his assists are at-the-rim assists per PBP Stats, but the film of those are more of the "big still has to do something, let's hope the scorekeeper is generous" variety than lay-downs and lobs.

He doesn't force the issue with pocket passes, nor is he trying to fit lasers into tight windows. If there's trouble — a hedge, a nudge at the nail, any sort of traffic — Maxey is inclined to look for outside help. Literally.

Those aren't inherently bad traits. Again, a second-year guard with Maxey's assist-to-turnover ratio (3.2) — and with the roster and role he's had to play this season — should be smiled at, not frowned upon. But if we're talking star turns, there is a level of manipulation and, frankly, audaciousness missing in his game right now.

The fact that we're having this discussion about Maxey means the Sixers nailed the pick last year. He's working through high-level courses at Lead Ball-Handler University earlier than expected. If the jumper stabilizes at this level (or better), the game will become even easier for him. Driving lanes will widen; passing windows will crack open a little more. Manipulation will be less necessary if he can force rotations.

Zooming out, Maxey popping to this degree gives the Sixers a little more wiggle room with the Simmons situation. He's playing so well, Simmons' absence hasn't affected the win total yet. And if this leap from Maxey proves to be real, there will be less need for an All-Star level ball-handler as the preferred return for Simmons.

I should emphasize the word "need" there; obviously the Sixers would love to land, say, Damian LIllard if he ever became available. But if Maxey is legit, the Sixers may feel more comfortable going wing-hunting instead. Just having that flexibility could lead to a quicker resolution.

For now, though, enjoy what Maxey is doing. He figuratively and literally isn't supposed to be in this position so soon.