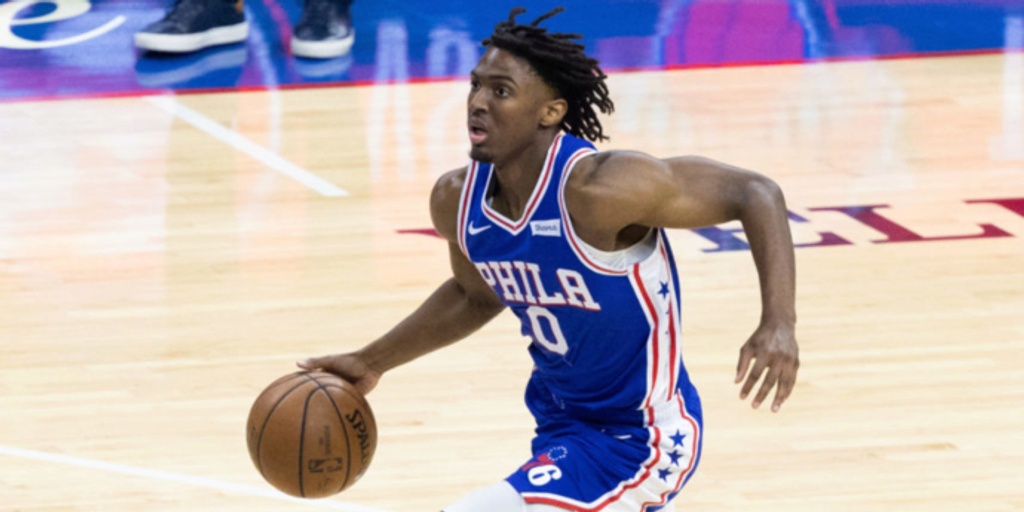 Tyrese Maxey centered on 'getting 1% better every day' for 76ers

It didn’t take long for Tyrese Maxey to learn a valuable lesson: At the NBA level, everybody is good and everybody is prepared.

With no summer league and only two days of training camp under his belt, the Kentucky standout was tossed into the deep end of the pool by Doc Rivers and the Philadelphia 76ers in Game 1. Maxey recalls having to guard savvy veteran Ish Smith in his debut. It didn’t go quite as planned.

“He comes in off the bench, runs right past me and makes a layup,” Maxey told a pool of reporters at UNLV’s Thomas and Mack Center. “And like, Doc is screaming and all the other coaches are yelling at me. I'm like, 'Bro, dang. He just subbed in. He just came right at me.'”

Nearly eight months later, Maxey is making up for lost time at NBA Summer League, an annual extravaganza in Las Vegas that didn’t take place last offseason due to the COVID-19 pandemic. As is the case with every rookie in the 2020 draft class, his development steps have gone backwards. It’s even more unique for Maxey, who’s coming off a playoff run in which he cracked the Sixers rotation.

Though the games don’t really matter in the grand scheme of things, Maxey isn’t downplaying the goals that he and Philadelphia have.

“You prepare the same way. You never take anybody lightly,” Maxey said. “I said it earlier in the playoffs that proper preparation prevents poor performance. So as long as you're preparing the right way, you're gonna be ready for whatever's thrown at you — whether it's regular season, summer league, pickup. And you always want to go out there and compete... at least I do. I don't like to lose, so everybody's gonna get my best."

In his summer league introduction, Maxey scored 21 points, nabbed 5 rebounds and dished out 4 assists. He went 8-for-15 from the field, nailing 3-of-6 triples in 25 minutes of action.

"Maxey, he's an elite scorer, certified bucket,” said Sixers teammate Paul Reed. “Playing with a guy like Maxey, you know he's not gonna do too much. He's gonna take care of a lot. He's so elite, and he's getting better at passing. It's fun to play with him, honestly."

Impressed by the compete level of every player and team in Vegas, Maxey is taking this opportunity to heart. He’s focusing on leading the team as Rivers instructed, finding guys in their spots and delivering it on target. His favorite to start things off was Isaiah Joe.

“It's fun to just pass the ball and you know it's going in. That's an amazing feeling," Maxey said of Joe, who scored 15 points and drained four threes.

"I wanted anybody who'd been on our team this last season to kinda come in and set the tone, and I think they've done a good job,” Sixers summer league head coach Brian Adams said. “They're very vocal in practice. When we make mistakes and we've gotta clean things up, they're the first ones to accept it and tell the team that we've got to move forward. I thought today with the way Maxey was aggressive and he was looking for Isaiah, it was cool to see the two of them play well together — Isaiah knocking down shots and both of 'em really trying to be consistent and strong at the defensive end. I thought they definitely set the tone well."

Maxey is focused on improving his jumper off the dribble after shooting only 30% from beyond the arc as a rookie.

“At the end of the day, whenever you're a small guard, if you can hit the three it's gonna open a lot of things up for you,” Adams said. “For him, the No. 1 priority is running the team and being the point guard out there. But also, his ability to space the floor with the three, whether it's on a spot-up or just aggressive one-on-one or in pick and roll. That's definitely an area we're trying to get him, especially if people go under on the pick and roll. We want to make people pay and have people have to go over going forward."

Defense is another area of focus, and Philadelphia assistant Dan Burke has told Maxey that he needs to get into every ball screen this upcoming season. In addition, he’s heard from his vets on how to better himself on that end of the floor.

Whatever those people put in his ear worked, as Maxey recorded three steals against the Dallas Mavericks in his first game.

“I think it comes with watching film, knowing what the coaches expect of me,” Maxey said. And then just reps. It's the practices during the season, talking to guys like [Matisse Thybulle], Danny Green, Ben [Simmons] — just different guys like that that's really good at it. It's really helped me and helped my progression."

Maxey felt comfortable in his first taste of summer league, and has an appetite for more.

“It felt great to be back on the floor playing basketball, competing in front of fans, playing with this group,” Maxey said. “This group works extremely hard. We've only known each other for six, seven days, and you can tell we're jelling. We're having a lot of fun out there. We're going out there and competing every single play. That's what it's all about."

Ready for his second season in the NBA, Maxey is set on getting one percent better every day. As for the goals of this short stay in Vegas, it’s pretty simple.

“Team-wise first, just to win. Go out here and compete, play the right way,” Maxey said. “That's what everybody's been telling us. Show the world that we're gonna compete and gonna be a winning organization.”

Now that he’s got some experience at the pro level, Maxey has a straightforward piece of advice for any rookie coming in this season: stay ready.

“I was just telling someone else that off days aren't off days for rookies,” Maxey said. “Optional shooting, you need to be there every single day and find a way to get 1% better 'cause you never know when your time's gonna be called.

“It's times where I didn't play the whole first quarter, [and] second quarter with five minutes to go, coach is yelling my name because someone has two fouls. You've gotta be able to go out there and know the scouting report, know the plays and be successful and try to help the team win. You just stay ready and wait for your moment."

We’ve seen flashes of those occasions for Maxey, and in Year 2, they may be brighter than ever.