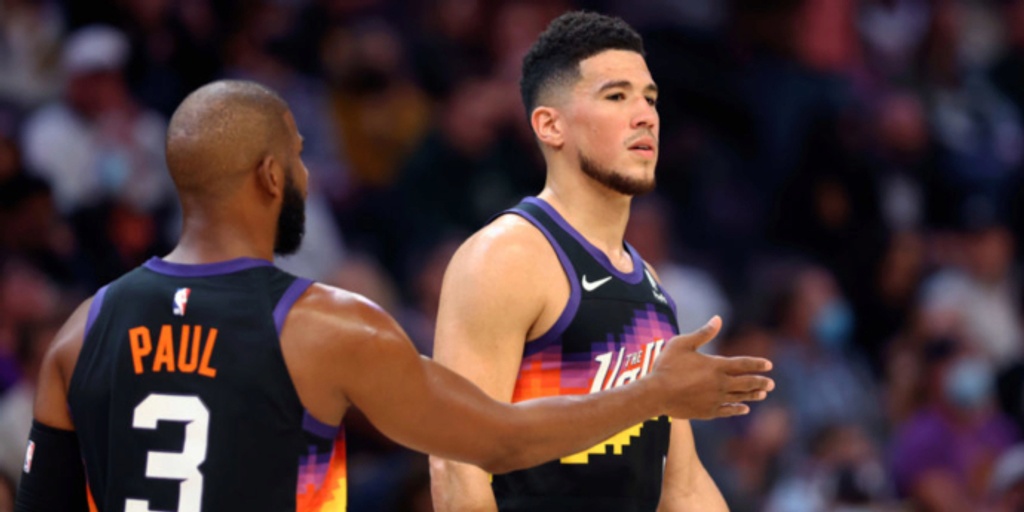 Suns' dominance shows that a repeat Finals trip is possible

When the Phoenix Suns began the 2021-22 season with a slow 1-3 start, some national pundits were quick to question whether their miraculous NBA Finals run was a mirage. But ever since that point, you can't find a more dominant team in the Association than the one residing in the Valley.

Phoenix has won 34 of their last 40 games. That’s absurd. And to put it in more jaw-dropping terms, the second-best record over that span belongs to Golden State, with 13 losses. So, the Suns not only have been playing outstanding basketball over the last two-plus months, but they’re beginning to lap the competition while doing so.

Since Oct. 28, the day after the Suns lost to the Sacramento Kings on a miraculous buzzer-beater from Harrison Barnes, here’s how they rank in advanced metrics league-wide: 112.8 Offensive Rating (4th), 103.2 Defensive Rating (2nd), +9.6 Net Rating (1st). During this span — stretching nearly the entire regular season, sans the opening week of play — Phoenix is the only team carrying a top-five offensive and defensive efficiency.

The Suns are also historically elite in clutch situations this season. Phoenix carries a 15-3 record in the clutch, including shooting almost 60% (59.2%) overall in these crutical moments. Incredibly enough, after we last checked in on this, the Suns are still miles ahead in terms of outscoring opponents per 100 possesions in the clutch at +42.7 NetRtg.

As long as the Suns have two of the most clutch scorers in the NBA right now in Chris Paul and Devin Booker, plus a rotisserie of depth around them, it's hard to not feel confident with the game on the line.

It’s still incredible to think about how the Suns used to be viewed in league circles only just a few short years ago. Phoenix was trotting out lineups headlined by lottery busts Josh Jackson, Dragan Bender and Marquese Chriss around Booker. Now, Booker is flanked by a concise unit of players that best suits his superstar abilities.

Kudos to Suns GM James Jones, because the job he has done since taking over full-time in 2018 has been nothing short of spectacular.

Phoenix not only has the star power with their dynamic backcourt duo of Booker and Paul, but their young core continues to blossom as well. Mikal Bridges is well on his way to a All-Defense nod, while also adding endless sharpshooting equity. Deandre Ayton has once again proved he’s worthy of a rookie-scale max contract extension whenever he’s been on the floor. Cameron Johnson is becoming a key cog in the Suns’ machine, who is likely earning his own lucrative payday.

On top of these five players, look at all of the win-now veterans littered throughout Phoenix’s rotation: Jae Crowder, JaVale McGee, Cameron Payne, Landry Shamet, Bismack Biyombo. And look out for the Suns to be active leading up to February’s trade deadline, as well as the buyout market for veterans wanting to chase a championship. There’s not a more attractive destination right now to pursue an NBA Finals berth than Phoenix.

The Suns have built a perfectly balanced rotation that brings a multitude of strengths to the table, which is by design, from the minds of Jones and head coach Monty Williams.

As the Suns continue racking up impressive wins night after night, they are well past the laughingstock stage they experienced for almost a decade post-Seven Seconds or Less era, headlined by two-time MVP Steve Nash. Instead, these new Suns are potentially leapfrogging the most successful chapters of team history.

When surveying the landscape in the Western Conference, Phoenix has the best case of any team to make a repeat Finals trip.

Golden State is their most realistic threat, but we’ve seen in multiple matchups between the two this season where Phoenix can attack them at will, with no issue. Memphis is an up-and-coming team who is actually right on the Warriors’ heels since Halloween for overall record, but it’s wait-and-see mode to find out if this continues toward a deep postseason push.

Utah is another team who could throw the Suns some potential roadblocks, but they’ve been maddeningly inconsistent as of late. Could Denver be an underrated team to monitor, especially with Nikola Jokic’s dominance and Jamal Murray’s looming return around postseason time?

Putting each team up against the Suns, it’s hard to find a way an opponent can beat them in a seven-game series. They have the stars, the depth, the head coach. Everything is firing on all cylinders in Phoenix right now — which makes it even scarier if they were to find another win-now piece to add to their already strong bench in the lead-up to the postseason.

Welcome to a new golden era of Suns basketball. It took a while to get here, and maybe the franchise had some embarrassing rock bottoms along the way, but this team may be headed to another peak for the title-starved city of Phoenix.