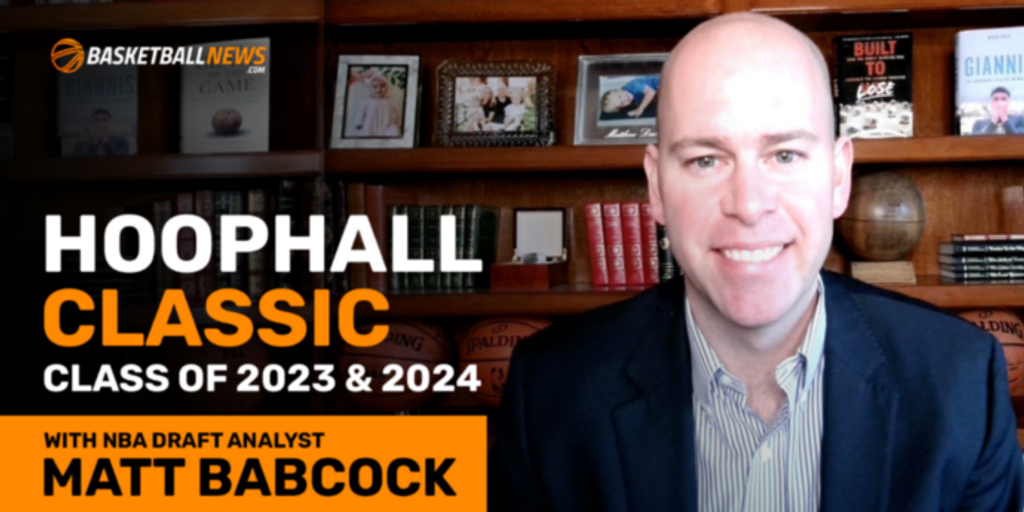 Last weekend I traveled to Springfield, Massachusetts, to attend the Hoophall Classic — a terrific event hosted by the Basketball Hall of Fame.

You've probably heard already, but former NBA player Dajuan Wagner has a son, DJ Wagner. He's the No. 1 rated player in the entire class of 2023. Although, I do think the hype and expectations that have been set for the younger Wagner are a little much. He's a good player. Rumors have been swirling that he'll be heading to Kentucky to play for John Calipari, his dad's former coach when they were both at Memphis.

He plays a limited role because his Montverde team is stacked, but Kwame Evans has the size and tools to get scouts excited. It seems as if he can become a legitimate scoring forward, as he has excellent size and is a natural shot-maker. I'm certainly going to track him closely moving forward.

The Hoophall Classic was my first opportunity to see Gill St. Bernard's Mackenzie Mgbako in person. A big hybrid forward that can shoot and score the ball, I left Springfield thinking that Mgbako could make a legitimate run to become the No. 1 player in the class of 2023.

AZ Compass Prep's Mookie Cook is an easy player to like. At 6'7" or so, Cook has good size and athleticism, but his approach to the game is what draws me to him. He plays with such great energy and also has a terrific motor. If Cook continues to polish up his offensive skills, you'll be hearing his name more and more. He looked like a top NBA prospect in the making.

Although he looked out of rhythm on the event's first night, AZ Compass Prep's Kylan Boswell bounced back on the second night and had a great showing. As a combo guard, he's strong, has a sweet shooting stroke and high basketball IQ.

Oak Hill's Caleb Foster continued to impress me at the Hoophall Classic. He is a point guard with positional size that is uniquely mature and composed. Foster does a great job of changing speeds and using his smarts to dice up defenses. Supposedly he is considering reclassifying and going to college next season. He's committed to Duke, as if they didn't have enough new talent coming in already.

Two players from the class of 2024 caught my eye.

The first player I'd like to mention is Ian Jackson, from Cardinal Hayes High School in New York. At 6'6", Jackson is an uber-athletic perimeter player that does a little bit of everything. He scored 30 points in their game versus De La Salle Institute.

I'm excited about Ian Jackson and his future, but I'm probably equally enthusiastic about Naasir Cunningham of Gill St. Bernard's. He's another player that's about 6'6" or so and does a little bit of everything. He's so athletic, can score on three levels, handles the ball well and he's a terrific rebounder. He executed a tip dunk on one play that had everyone in attendance in awe, myself included.

Generally, the younger the prospect, the more careful I try to be not to make too bold statements. However, I will say this about these two guys: my impression is that they are both elite prospects. They're not surefire NBA stars, as I don't think any player at that stage should be given that label. However, their potential is through the roof, and if they continue to develop and take care of business, they could become exceptional players. I'm very excited about these two prospects.

I'd be remiss if I didn't mention Derik Queen from Montverde too. We all need to keep close tabs on Queen. He is a big-bodied, interior scorer that is smooth. His physical development and conditioning are worth monitoring, and low post scorers aren't in as high demand as in years past. Still, he is a significant young talent.

All in all my trip to Springfield, Massachusetts, was a great success. I look forward to attending the Hoophall Classic again, as it was a very well put-together event. To everyone that helped make it happen, thank you! I'll see you again next year.