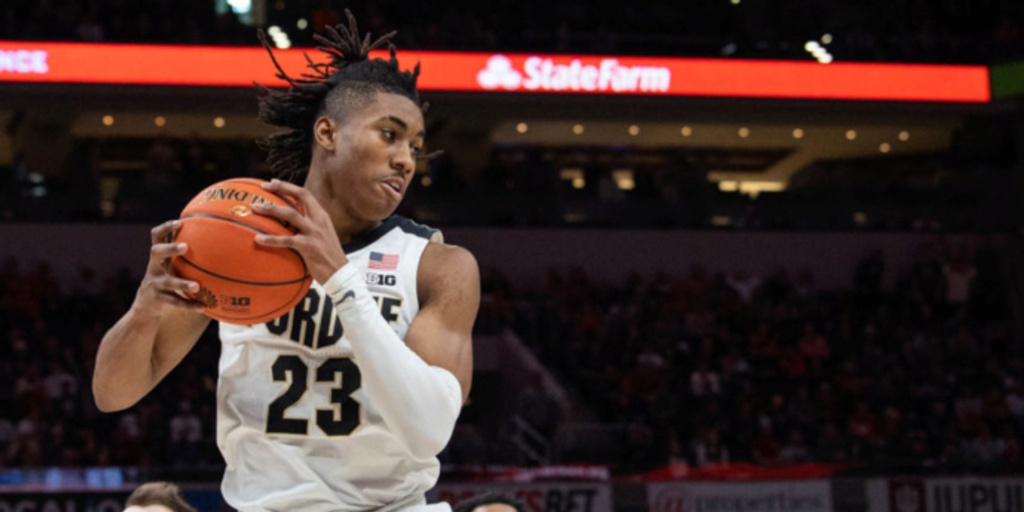 Is Purdue's Jaden Ivey a star in the making?

Several years ago, I attended the Charleston Classic in South Carolina. In doing so, I became familiar with Purdue head coach Matt Painter's coaching style and offensive system, which is predicated on ball movement, perimeter players moving without the ball and feeding low-post scorers on the block.

Carsen Edwards — a strong and explosive, assertive, scoring 5-foot-11 guard — was their star. Edwards routinely ran off screens, endlessly hunting his shot in Painter's system while using ball screens as his secondary option. He had the full green light, which he took advantage of as he averaged 24.3 points per game. Ryan Cline was their shooting specialist, making several three-pointers per game and shooting an impressive 41.7% from deep. And lastly, they had giant 7-foot-3 Matt Haarms on the block. It was a terrific team that won a share of the Big Ten regular season championship and nearly made it to the Final Four.

However, despite Edwards' iconic performance in the Elite Eight, in which he scored 42 points while knocking down 10 three-pointers, the Boilermakers fell short to the eventual NCAA champion, Virginia. I appreciated Painter as a coach during that season and I've always looked forward to watching his teams play ever since.

Fast forward a few years to this current season when I recently attended the Big Ten Tournament and watched Painter's Boilermakers play several days in a row. It felt a bit like deja vu, as their team was very reminiscent of the 2018-19 Purdue squad. Sophomore guard Jaden Ivey is their star, and he also routinely runs off screens that lead to pick-and-roll actions in identical sets, just as Edwards did. They have Sasha Stefanovic, a freshman on the 2018-19 team and now a senior, playing Cline's shooter role. Trevion Williams, who was also a freshman on that last team, is now their primary low-post scoring threat. They also have 7-foot-4 Zach Edey in the Haarms role.

As usual, I enjoyed watching Purdue play in the Big Ten Tournament. They beat Penn State and Michigan State before falling to a good Iowa team in the championship game, securing a No. 3 seed in the Big Dance.

This year, the Big Ten Conference was loaded with talent, so I chose to attend the entire conference tournament rather than attend multiple tournaments like I usually do. And despite the abundance of talent in Indianapolis, one player stood out from the crowd, and that player was Ivey.

Through 35 games this season, Ivey has averaged 17.6 points, 4.8 rebounds and 3.1 assists per game. He was named First Team All-Big Ten Conference and Second Team All-American. He has established himself as a college star and a top NBA prospect, as he's widely considered a probable top-four pick in the 2022 NBA Draft.

Although Ivey and Edwards are playing a similar role for Purdue, their games are not the same. On the one hand, Edwards is an undersized scoring guard whose effectiveness is centered around his outside shooting — seemingly a perfect fit in Painter's offense. On the other hand, you have Ivey, an elite athlete who is a nightmare for opponents to stop one-on-one. Painter calls isolation and high pick-and-roll plays here and there for Ivey, breaking away from his typical offense to utilize Ivey's talents properly. Still, while I love Painter's offense, it's not built for a player like Ivey, nor is the college game in general, for that matter.

But you know what is built for a player like Ivey? The modern, guard-driven NBA with emphasized spacing so players like Ivey can create with the ball in their hands.

Two great plays by Jaden Ivey, back to back. Once he gets downhill, it’s over. #B1GTourney pic.twitter.com/3gk5JKBCKm

Sitting alongside me at the Big Ten Tournament were countless NBA scouts and executives, and I spoke to many of them.

"He will be a beast in the league," one general manager added.

He was compared to big stars, and bold statements were shared left and right. However, they are all valid, in my opinion. When the ball is in Ivey's hands, he is an overwhelming threat who is impossible to guard at times. He has a gear that not many players possess, providing him with elite talent and upside similar to those notable names above.

For the 2022 NBA Draft, four players have separated themselves from the rest: Jabari Smith, Chet Holmgren, Paolo Banchero and Jaden Ivey in some order, with Iowa's Keegan Murray seemingly knocking on the door to that group as well. Although in recent days there have been a couple of articles published suggesting that Ivey could make a play for the No. 1 spot (which I'm happy to see), I find it interesting that Ivey seems to be ranked fourth in that group more often than not by the media.

I've been one of Ivey's biggest supporters this season, ranking him No. 2 on the BasketballNews.com 2022 NBA Draft Big Board. But I'll admit, he isn't perfect. He has some things to work on, like improving his decision-making, ball control and overall court awareness. He's shot the ball pretty well this season, knocking down 63-of-173 three-point attempts (36.4%), but he's certainly not a pure shooter.

But here's how I see it: there are always questions for young players transitioning to the pros, and Ivey is no exception. However, I believe that the questions surrounding Ivey are manageable. Subsequently, it leads me to visualize what type of player Ivey could become if he did indeed maximize his potential.

Could we be witnessing a star in the making? Perhaps.