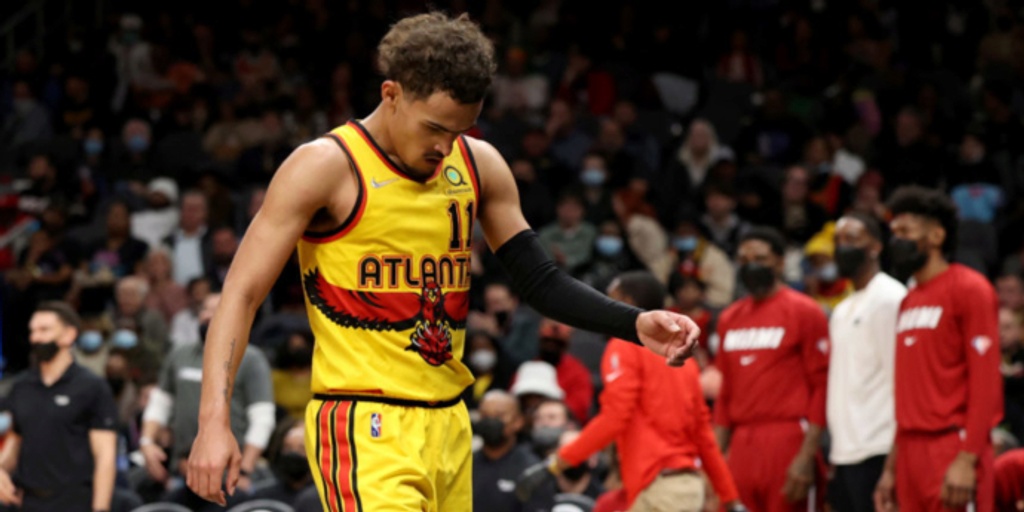 The Atlanta Hawks had such high hopes.

After a surprising playoff run that came up just short of the NBA Finals, they came into this season with a deep roster led by one of the league's most exciting young players.

Yet now, with only a handful of games remaining, Trae Young and the Hawks are limping toward the postseason with no prospects beyond a play-in spot and nothing to indicate they'll be hanging around very long in April.

Of the NBA's most disappointing teams, the Hawks are near the top of the list.

“We still have an opportunity,” insisted coach Nate McMillan, whose team is 36-37 and 10th in the Eastern Conference, the final play-in spot. “The goal is to get ourselves in the playoffs. Once you get there, we showed last year that anything can happen.”

Only last year, the Hawks rolled into the playoffs as one of the league's hottest teams, flipping a switch when McMillan took over for Lloyd Pierce.

They went 27-11 after the coaching change, grabbing a No. 5 seed in the Eastern Conference.

They kept up that momentum in the playoffs, romping past the New York Knicks in what became Young's (Madison Square) Garden party, stunning the top-seeded Philadelphia 76ers in seven games (effectively finishing off The Process), and taking the eventual NBA champion Milwaukee Bucks to six games in the East final.

If Young had not twisted an ankle in a freak collision with a referee, the Hawks very well could have knocked off the Bucks and advanced to the NBA Finals for the first time since moving to Atlanta in 1968.

Suddenly, the A-T-L went from a sleepy backwater NBA city that generally ranked near the bottom of the league in attendance to abuzz with excitement — especially after the team locked up cornerstones Young and John Collins with massive contracts.

But this season hasn't come close to meeting expectations.

The Hawks have lingered around .500 all season — never building any sort of momentum, generally playing like a group of strangers, showing very little of the joy and camaraderie that carried them so far last summer.

Their mediocrity has been especially glaring in a year when the Braves gave Atlanta its first World Series title since 1995 and the Georgia Bulldogs won the college football championship.

“Last year for a lot of guys, it was new,” center Cint Capela said. "People don't really realize how hard it is to get there. You’re never guaranteed to go back to the conference finals.”

Young has put up another big season, ranking fourth in the league in scoring (28.1 points per game), but his supporting cast has been perplexingly inconsistent.

Capela has taken a big step backward, leaving the Hawks vulnerable defensively and on the boards. Bogdan Bogdanovic has never looked comfortable taking some of the scoring load off Young. Ditto for Kevin Huerter, who has too many nights when he fails to show up in the box score. Collins may be done for the season with hand and foot injuries.

Promising wins are generally followed by baffling losses, such as Wednesday night's 122-101 debacle against lowly Detroit, a 20-53 team that looked like a championship contender against Atlanta

The Hawks haven't won back-to-back road games since late December, which doesn't bode well for a team that will likely have to win two straight away from home just to earn its way into the playoffs.

“We know what we've got to do,” Young said. “We've got to stay locked in and try to finish out the season strong and see where it leads us in the end."

There have been some unexplainable losses to the league's weakest teams — three times to the Knicks, twice against the Pistons, not to mention Orlando, Washington, Portland, San Antonio and Houston.

General manager Travis Schlenk, who totally overhauled the roster to set up last year's playoff run, held off on any major changes at this season's trade deadline. His only move was dealing former first-round pick Cam Reddish, who was unhappy with his lack of playing time, to the Knicks.

Now, Schlenk will have to decide if 2021 was an aberration and more big changes are needed.

Capela hopes this season was just an unexpected blip.

“It’s a new process. Sometimes the next season, you put too much pressure on yourselves, so you don’t do as good," he said. “It's the season after that where you do good."