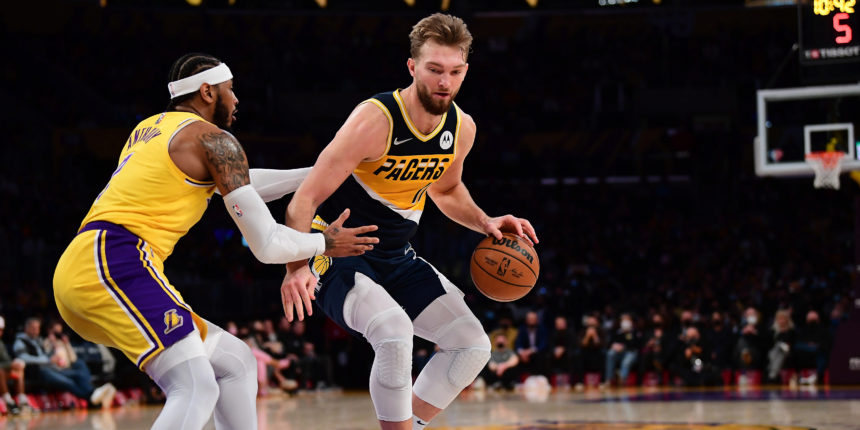 During the Indiana Pacers' 111-104 win over the Los Angeles Lakers on Wednesday night, Domantas Sabonis suffered a left ankle sprain that could sideline him for a bit. The injury occurred late in the fourth quarter, when Sabonis stepped on Russell Westbrook's foot.

The two-time All-Star was able to remain in the game, finishing with 20 points, 12 rebounds and 10 assists while shooting 75% from the field. However, after the contest, Pacers head coach Rick Carlisle said that the sprain is "probably going to be significant," according to Scott Agness of Fieldhouse Files.

"He was not gonna come out of this game," Carlisle added, per James Boyd of the Indianapolis Star. "He was determined to help will us to the win along with Caris [LeVert] and the guys who were out there... The three-point shot that Sabonis hit on the bad ankle was one of the big shots of the year, just a guy that was completely determined to pull us through this thing."

Sabonis told reporters that he will ice his ankle and try to play in tomorrow's game against the Golden State Warriors, but he may end up missing some time (judging by Carlisle's comment).

"We'll deal with that as it comes," Brogdon said of that possibility. "If [Sabonis] has to miss some time, we'll have Goga [Bitadze] and Isaiah [Jackson] step up and we'll try to keep it rolling."

Turner's foot injury will reportedly keep him out through the NBA trade deadline on Feb. 10. This is significant because the Pacers are reportedly considering a rebuild and listening to offers for their top players. Turner has been linked to the Dallas Mavericks, Portland Trail Blazers, Minnesota Timberwolves, New York Knicks, Los Angeles Lakers and Charlotte Hornets among other teams.

Sabonis has consistently popped up in trade rumors throughout this season too, including a recent report that the Sacramento Kings have "accelerated" their trade talks involving Sabonis. Jason Anderson of The Sacramento Bee also reported that De'Aaron Fox has come up in those discussions with the Pacers.