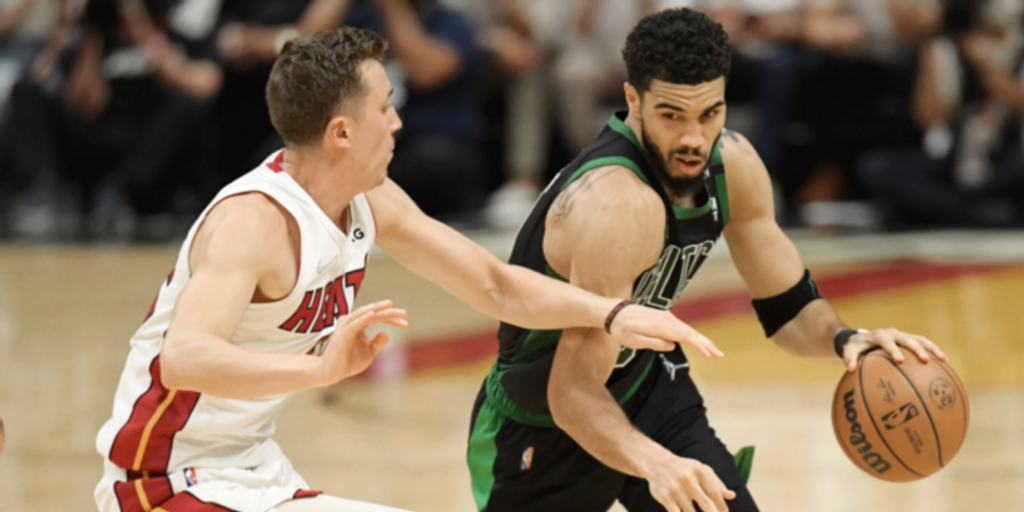 NBA Stats Notebook: This wacky Celtics-Heat series — by the numbers

As a viewer who actually enjoys watching basketball — and especially playoff basketball — I get miffed when social media brands with influence post like this:

Biggest lead each game this series:

I recognize that StatMuse isn't a traditional news outlet and that its primary purpose is to, well, let's call it "generate discussion." However, to say "this series sucks" is beyond simplistic and standoffish — I would even argue it's untrue.

The Eastern Conference Finals' games have not been particularly close on the scoreboard. It might be an acquired taste for NBA fans who want to see a spectacle at the end of a game instead of during the middle quarters. But the Boston Celtics and Miami Heat have absolutely slugged it out in a 3-2 battle in the trenches. It's created one of the more bizarre series we've seen, fully loaded with lockdown defense and herky-jerky offense.

The numbers this series is spitting out are also, quite frankly, unreal. I'd like to round some up for you to give you an impression of the bizarre, trippy, straight-up mystifying nature of these past five games.

The Heat missed 38 three-pointers tonight, the second most in a single playoff game in NBA history.

The Heat, almost literally, could not buy a perimeter bucket on Wednesday. They shot 7-of-45 from beyond the arc. That 15.6% clip is the fourth-worst of this postseason, but none of the three ahead surpassed 40 attempts in the game. In fact, only twice in the regular season (Dallas on March 9 and Boston on Dec. 29) did a team shoot worse on over 40 attempts.

Doubly-in fact, only two other postseason games have ever seen a team shoot under 20% on at least 40 three-point attempts:

It was a rough night, led by the backcourt of Kyle Lowry and Max Strus.

According to @EliasSports, that's the worst 0-fer for a starting backcourt in playoff game since starters were officially tracked in 1970-71. pic.twitter.com/PiGKhQQAA3

So, this is just an ugly series where the Heat are missing shots, right?

Both the Celtics and Heat have fortified the perimeter. Miami is attempting 12.8 "wide open" perimeter shots per game, categorized as an attempt when the closest defender is at least 6 feet from the shooter. It's even lower for Boston at just 10.4 attempts per game. Both teams are actually shooting fairly well when they find these looks, with the Celtics hitting at a 40.4% clip and the Heat at 37.5%. They just have scarcely found these chances.

The table below compares how made wide-open shots both teams found at different segments of the season, plus the percentage of their total three-point attempts that were wide open (scroll right for full table):

Look at that drop-off for Boston! After the Brooklyn Nets and Milwaukee Bucks effectively dared the Celtics' complementary players to knock down threes, the Heat haven't given them breathing room. Meanwhile, Boston has only made life more difficult for a Miami offense that already struggled to create open looks. It's like watching two snakes try to squeeze the life out of each other.

Circling back to Wednesday night, only 14 of Miami's 45 three-ball attempts were categorized as wide open. The Heat actually went 5-for-14 for a half-decent 35.7% clip on those shots... which means they were 2-for-31 (6.5%) on shots with some level of contest. I just shivered.

Half-court offense at the 6:22 mark, per @cleantheglass

When Nekias tweeted this, Jayson Tatum had just fouled Jimmy Butler and the Heat led 27-22. That already is brutal, and these half-court Offensive Ratings are just over half of the 95.8 league average of the playoffs.

Boston figured something out as the game went on and finished Game 5 averaging 92.5 points per 100 half-court possessions. Miami's half-court ORTG: 58.8!?! You don't need me to tell you that's easily the worst rating of the postseason, with the Heat's Game 4 (65.7) not far behind. Miami's half-court offense is in a... state.

But let's not turn on the Heat too much (is that a pun and a double meaning in one sentence?). Miami racked up 19 steals in Game 3, the most by any team in a playoff game since the Bucks swiped 20 in 2015 and the second-most since 2004-05. According to Cleaning the Glass, Boston's 25.5% turnover rate in that contest is the most from the franchise in any game — regular season or playoffs — since 2014.

The Heat have three players with a steal rate above 2.0% this postseason, per Cleaning the Glass: Victor Oladipo (2.7%), Butler (2.4%) and Caleb Martin (2.1%). Oladipo and Butler are both averaging 1.8 steals per game in the conference finals, while Lowry (1.3) and PJ Tucker (1.2) aren't far behind. And while Gabe Vincent hasn't gotten the steals to match, his 3.2 deflections per game tie the second-best average in the series behind only Butler.

Miami relies on swarms of event creation to generate turnovers and support its sporadic offense. Boston wants to wear the Heat down in the half-court and take their confidence away.

It may not look like your typical playoff thriller, but as the series record shows, an NBA Finals berth is still very much in play for both franchises.

These conference finals have been defined by variance. Large swings in either direction have led to massive leads from each team in both series. How much of this can be attributed to the rise in three point attempts, as illustrated here? pic.twitter.com/WCfQcar0HR

Reminder that everyone’s most beloved playoff series was a snooze fest until Game 7: