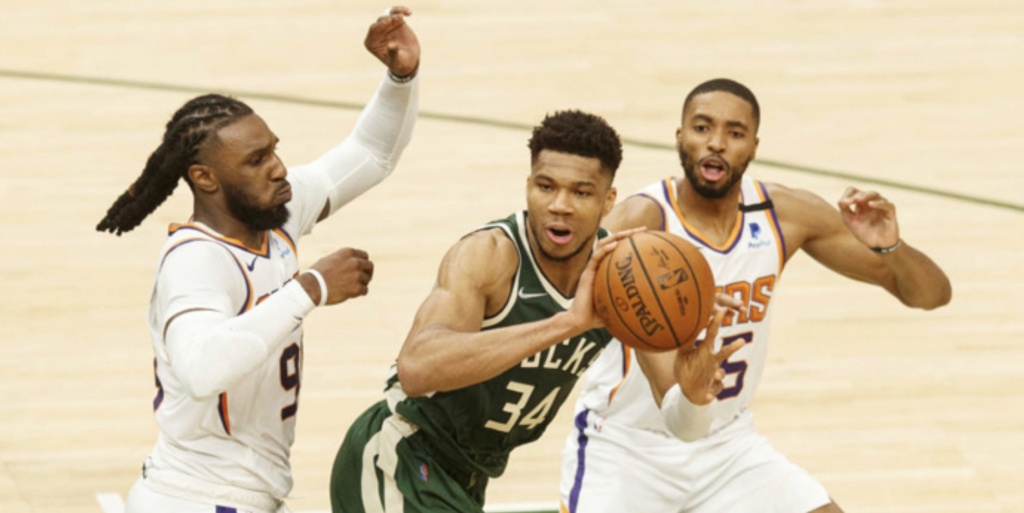 The Great Wall of Phoenix? Suns must get innovative to contain Giannis

With 41 points, 13 rebounds and 6 assists in Game 3, Giannis Antetokounmpo exposed and exploited the Phoenix Suns’ lack of depth and size in the post.

The Greek Freak and the Milwaukee Bucks attacked Deandre Ayton and got him into foul trouble, and they were able to pick apart the Suns’ defense from the inside to the degree that folks are talking about the series now being in Milwaukee’s favor.

So how will the Suns adjust in Game 4? Is there a way to limit Giannis from dominating the paint?

I made a prediction of how the Suns could do that on Twitter after Game 3 under the guise of a question.

In game 4 Wednesday, let’s say PHX will build a wall around Giannis. Who is stepping up offensively?

Even Chris Paul seconded my hunch.

"We got to try to build a wall somehow, some way," Chris Paul said after Game 3. Paul echoed this sentiment yesterday, adding, "We're going to keep trying to build a wall. He's coming full speed every play, like a running back coming downhill. Coach has a saying... 'We try to get in his way.'"

Building a wall around Antetokounmpo isn’t anything new or novel, as many teams have tried this strategy with varying degrees of success since the Toronto Raptors introduced this strategy two years ago.

"The first time I saw the wall was probably two years ago," Antetokounmpo said. "It's kind of hard, because you want to be effective, you want to get downhill, you want to do everything, but now you also... you take it personal also. There's a team that's building the wall of three people and two guys behind and trying to stop you. Now, you have to not take it personal and make the right play, find the right guy. I feel like I [do] that better now than two years ago. I'm doing it better. I'm finding [and] trusting my teammates. I'm finding guys... [It] is funny that there's a defense out there called the 'Giannis Wall.' It's funny to me, you know? It's crazy."

Yesterday, Antetokounmpo admitted that he dislikes when opposing defenses form a wall.

"It is a compliment that there's got to be three people in front stopping me from getting in the paint and building that wall. But, yeah, I hate it, though," Antetokounmpo said with a laugh. "I'm not going to lie; I hate it. But at the end of the day, you got to figure out a way to play through it."

The Suns, due to their lack of bigs, may have to resort to building the “wall” to regain control of the series. But here's a question worth asking: What will the Suns' wall will look like, and would building it be pointless?

The Wall In Theory

Theoretically, building a solid wall to slow down Antetokounmpo would consist of physical defenders with length who could force him into turnovers by narrowing and cutting off his driving lanes at the elbows. The Suns could put one together and have it anchored by Ayton, Mikal Bridges and Jae Crowder. All three of these players have the wingspan and stature to bother Antetokounmpo by halting his drives and forcing him into turnovers that lead to points in transition.

The wall is more successful when Antetokounmpo is trying to drive from the top of the perimeter.

Notice at the 26-second mark. Antetokounmpo is above the break and looking to attack. Now, pay close attention to how the Raptors built their "wall." Three men are close to the free-throw line to take away the elbows as driving lanes. Marc Gasol retreats into drop coverage, funneling Antetokounmpo into Pascal Siakam, the help defender. The result? A turnover.

Following that model, Phoenix could set its wall up with Crowder at the center of the free-throw line, Bridges to his immediate left and Ayton on the far block. Paul would be to the right, with Booker a few steps behind. Crowder drops and takes Antetokounmpo into the help defense (preferably Ayton) to force a miscue or a tough, contested shot. While the Suns may not have the ideal personnel for the wall, they can still deploy it and succeed with innovative placement.

The Wall In Reality

Regardless of where the players are placed, there’s a possibility that the Suns’ wall just won’t work. In the setup described, the Bucks and Antetokounmpo could hunt the weakest link and use that driving lane. If Crowder drops and dares Antetokounmpo to shoot, he could take that shot or kick it out to Khris Middleton or Jrue Holiday, for example.

Paul acknowledged that forming a wall is difficult because the Bucks have good shooters around Giannis.

"He's able to [get downhill] because he's surrounded by some really good players too," Paul said. "Because you have Middleton out there on the wing, you got [Brook] Lopez out there shooting it and you got Jrue Holiday and all these other guys."

If Antetokounmpo is driving from the high block, it’s a wrap. If he gets that easy path to the basket, it will be a long night because no one on the Suns can effectively guard the Greek Freak when he's going downhill.

At 15 seconds in, notice where Antetokounmpo is. At this angle, he uses his explosiveness to accelerate downhill before the Atlanta Hawks’ version of the wall can formulate. Easy basket. At 39 seconds, Antetokounmpo accelerates and spins his defender to get an easy layup over Clint Capela.

If Milwaukee sticks to the script of what it did in Game 3 -- with Antetokounmpo playing more in the post and exploiting Phoenix’s lack of depth at the 5 -- building a wall would be pointless for the Suns. They would be better off with blitzes and traps.

Though in order to regain control of the series, building a wall on defense might be Phoenix's only viable option. Despite their lack of personnel, it could still work with a little bit of innovation.

On the other hand, the Bucks’ size, and a powerful force in Antetokounmpo, could demolish that attempted wall -- brick by futile brick.