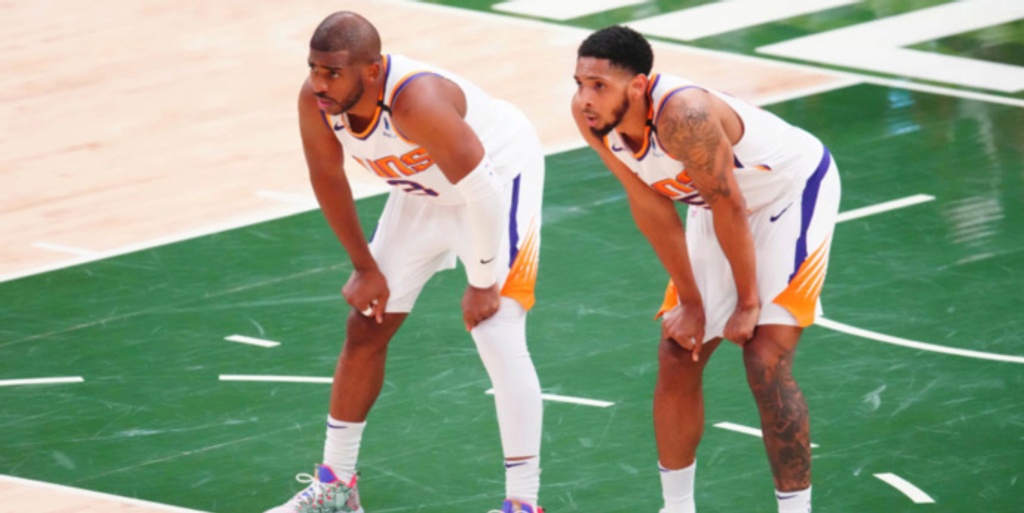 The biggest winners from Day 1 of NBA free agency

The NBA's free-agency period is in full swing, with agreements being reported left and right. Who were in the instant winners? After Day 1 of free agency, which teams made the biggest improvements to their roster? Let’s go ahead and examine who stood out on the opening night of free agency.

Pat Riley once again proved that you can never, ever count out Miami. Not only did the Heat secure Kyle Lowry via sign-and-trade on a three-year, $90 million deal, but they also re-signed sharpshooter Duncan Robinson on a five-year, $90 million extension. Also, a very underrated move was Miami stealing gritty veteran PJ Tucker from the Milwaukee Bucks (on a two-year, $15 million contract) since he'll instantly become a key cog in their rotation as a small-ball big who can guard 3-5.

Lowry and Tucker are tremendous fits within the Heat’s hard-working culture, as two veterans who are known for their relentlessness and drive to win. Miami went all-in on adding win-now veterans to an already intriguing core spearheaded by Jimmy Butler and Bam Adebayo.

Looking ahead to the 2021-22 season, Miami feels entrenched atop the Eastern Conference’s second tier behind only Brooklyn and Milwaukee. The Heat’s rotation now features a Butler-Adebayo-Lowry big three with valuable role players such as Robinson, Tucker, Tyler Herro and Kendrick Nunn (assuming the restricted free agent is re-signed).

There are more moves to come that will further address their depth, but Miami is off to a hot start.

For a team who just made the NBA Finals, the Suns have kicked off their 2021 offseason with a bang. On draft night, the Suns acquired shooting guard Landry Shamet from the Nets, who fits perfectly off the bench within head coach Monty Williams’ “0.5 offense” scheme. Shamet’s three-point marksmanship helps form a deadly bench duo alongside Cameron Johnson, as snipers who can hunt for easy deep shots relentlessly.

That wasn’t all for Phoenix, as they landed the best bargain deal on Day 1 of free agency. Backup point guard Cameron Payne returned to the Suns on a three-year, $19 million deal. Compared to other depth-guard signings, Payne seems to have given Phoenix a loyalty discount since they were the team that saved his NBA career. Payne’s shot-creation ability off the bench is a huge asset for the Suns, and his further developing offensive profile is a massive spark plug that Phoenix couldn’t let walk away.

Chris Paul also returned to Phoenix (as expected) soon after free agency opened, agreeing to a four-year, $120 million contract. However, Paul and the Suns created some flexibility down the line; the third year is partially guaranteed, while the final year is non-guaranteed. This is a win-win scenario for Paul and the Suns, who are ready to run it back with the future Hall-of-Fame point guard.

Following Dario Saric’s torn ACL in Game 1 of the NBA Finals, adding a backup center became Phoenix’s top priority outside of retaining their own free agents. The Suns needed to add size, length and athleticism behind Deandre Ayton. Enter JaVale McGee, who joins the Suns on a one-year, $5 million contract. McGee’s veteran presence will help Ayton, but also add a new twist to the Suns’ second unit.

The Suns just made the NBA Finals and subsequently improved their roster. Watch out for Phoenix to stay atop the Western Conference next season.

Lonzo Ball is the perfect fit for the Bulls as their starting point guard of the future. Providing a perfect complement of playmaking, shot creation and steady defense alongside Zach LaVine, Ball is set up to thrive in the Windy City. What Lonzo cost Chicago was a steal, in my opinion. Sending out only Tomas Satoransky, Garrett Temple and a second-round pick to the Pelicans in a sign-and-trade, Ball’s four-year, $85 million contract is fair value for a player who continues to improve every season.

The rumor was that Chicago wanted to add multiple guards in free agency, and they accomplished that in stellar fashion, signing key Lakers reserve Alex Caruso to a four-year, $37 million deal. Like Ball, Caruso provides a nice blend of all-around game that will be an instant jolt to the Bulls’ second unit. Caruso shot plus-40% on three-pointers this past season in Los Angeles, and his pesky on-ball defense is an obvious trend Chicago prioritized early on.

The Bulls might not be done making splashes, though. There are heavy rumblings surrounding a potential double sign-and-trade sending DeMar DeRozan to Chicago and Lauri Markkanen to San Antonio. If Chicago is able to land DeRozan on top of their big-guard moves, Chicago’s early free-agency grade vaults to an even higher level.

The Knicks had $50 million in cap space coming into free-agency, and they used it all up on the first day. Running it back by re-signing Derrick Rose (three-years, $43 million), Nerlens Noel (three-years, $32 million) and Alec Burks (three-years, $30 million), New York is prioritizing continuity for a team that finished as the No. 4 seed in the Eastern Conference last season.

Utilizing the rest of their remaining cap space, New York signed three-level scoring guard Evan Fournier to a four-year, $78 million deal. Fournier might seem like a confusing signing for that amount of money, but he fits very well within the Knicks’ system. Fournier’s shot creation will be a welcome asset alongside Julius Randle and R.J. Barrett. Since becoming a full-time starter in the league six years ago, Fournier has averaged 16.9 points while draining 38.1% of his three-point opportunities. Fournier brings a floor-spacing element that has been missing consistently within the Knicks’ offense.

New York now has an interesting rotation littered with depth across the board:

Once the Wizards traded Russell Westbrook to the Lakers on draft night, many assumed a full reset was incoming. Bradley Beal would soon ask out of D.C. with no hope of fielding a competent roster around him.

Turns out, those preconceived thoughts were way off. It’s very impressive what the Wizards have accomplished over the last week, surrounding Beal with a young nucleus who can contribute immediately. Spencer Dinwiddie is on the verge of agreeing to a three-year, $60 million deal as Beal’s backcourt partner. The last time Dinwiddie played a full season in Brooklyn, he averaged 20.6 points and 6.8 assists. Dinwiddie’s efficiency should go up playing alongside Beal, and both take immense pressure off one another.

Not only is the backcourt fit now snug between Dinwiddie and Beal, but the role players are a strong collection who are tailor-made for their superstar shooting guard: Davis Bertans, Rui Hachimura, Kyle Kuzma, Kentavious Caldwell-Pope, Deni Avdija, Daniel Gafford, Corey Kispert, Isaiah Todd, Thomas Bryant and Montrezl Harrell. Washington’s rotation now legitimately goes 11-12 players deep, a stark contrast from where they were a few weeks ago, even with Westbrook on their roster.

Inking Dinwiddie on a three-year deal vaulted Washington into the winners list, and they certainly deserve the praise for retooling on the fly around Beal.

The Lakers are Day 1 winners in free-agency? Indeed they are, because they are attacking their biggest need: three-point shooting. In order for Hollywood’s new big three of LeBron James, Anthony Davis and Russell Westbrook to work, endless amounts of sharpshooters need to surround them. Through the first day of free-agency, Los Angeles is off to a great start.

Signing Trevor Ariza, Wayne Ellington and Kent Bazemore, the Lakers have added three above-average shooters from deep. Ellington could potentially step into a starting role alongside Westbrook in Los Angeles’ backcourt thanks to his 42.2% clip on threes last season with the Pistons. Meanwhile, Ariza and Bazemore provide two-way versatility as perimeter shooters and on-ball defenders who can cover multiple positions.

Los Angeles also signed Dwight Howard, who will become a key cog in their big-man rotation alongside Davis. Howard averaged 7.5 points, 7.3 rebounds and 1.1 blocks in 18.9 minutes per game during the Lakers’ championship run.

If the Lakers continue to address their spacing in a positive manner, they are on the right track to making the LeBron/AD/Russ partnership work magnificently.