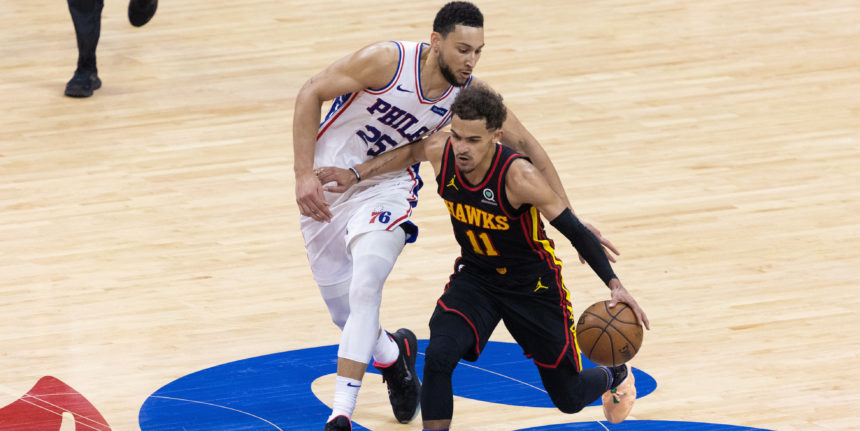 The scene has been set, explored, revisited, psychoanalyzed. You name it, it's been done.

Ben done, if you will.

Ben Simmons, in a high-pressure situation against the Atlanta Hawks, had a layup opportunity. Instead of taking it, he dished the ball off to Matisse Thybulle, who would eventually earn a trip to the free-throw line. It was an inexplicable choice by a player as talented — and even more simply, as large and open — as Simmons, but it was just that. An inexplicable choice.

But it's a choice that began (or accelerated, depending on your priors with Simmons) the downward spiral of his status as a star-caliber player. It set the stage for the mess we've had the (dis)pleasure of reading about for months.

The Philadelphia 76ers lost the series to the upstart Hawks. Doc Rivers said things that he later said he didn't say. Simmons didn't take too kindly to it.

Simmons asked out. The Sixers made it clear they would only move him for a bounty. Teams weren't — and, as of this writing, still aren't — willing to give up said-bounty.

Simmons didn't report to training camp, and was fined. The fines stopped once Simmons did report, but before expressing his bout with mental health issues. The mental health element permeating throughout the entire ordeal is a sensitive one — one that has made me incredibly uncomfortable to see dissected and speculated about in real time.

Meanwhile, the Hawks are in their own sort of spiral.

Their playoff run ended with a loss to the eventual NBA champion Milwaukee Bucks, but things were looking upward.

Trae Young (further, officially) announced himself to the world as a bona fide star. His supporting cast, highlighted by John Collins, Clint Capela and Bogdan Bogdanovic, proved to be impactful in its own right. Skilled. Versatile.

It was hard not to be excited by this Hawks team. Star talent, strong coaching, a deep roster.

Whew, buddy, is this a deep roster!

So deep, in fact, that head coach Nate McMillan mentioned during Media Day we'd see some all-bench units in an effort to spread the wealth.

The Hawks have dealt with lineup questions, a lack of "oomph" defensively (27th in defensive rating), an adjustment period to let-'em-play officiating, a who-gets-to-the-rim-besides-Trae problem, a tough opening schedule and a stronger conference overall.

They are currently the losers of five straight, tied with the Hornets for the longest skid in the conference. Words like "sacrifice" and "boredom" have been uttered; that ain't what you want to hear less than a month into a new season.

I have a theory. A question, really: What if the Hawks are passing up a layup of their own?

What if the Sixers and Hawks have the answer to each other's problems?

Why haven't we explored the possibility of Simmons as a Hawk? 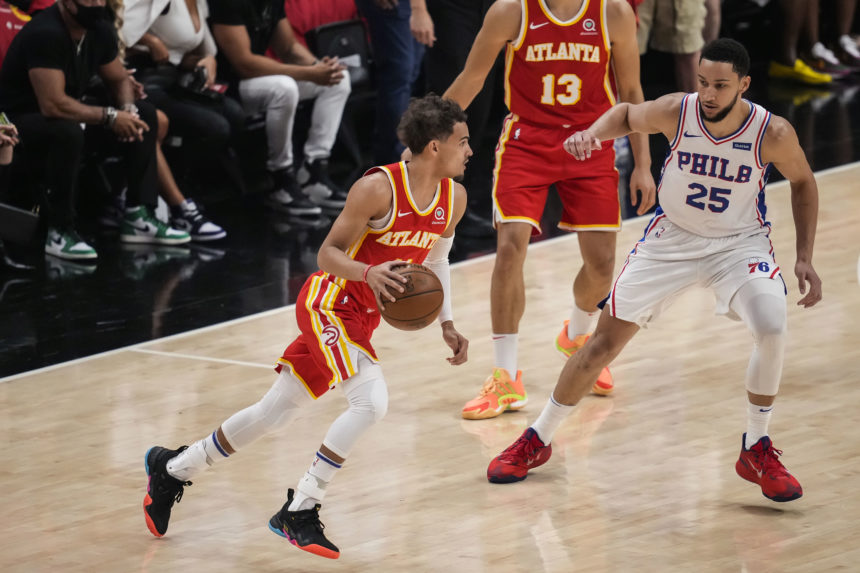 On the Sixers' side, they haven't missed Simmons too much. They're 8-4, sporting a top-five offense and defense in the half-court, per Cleaning The Glass. A COVID outbreak has Joel Embiid and Tobias Harris out of the lineup, so a slide wouldn't come as a surprise. But when upright, this team has been good.

You can thank The Others™ for that. Seth Curry is the best shooter in the league right now. Tyrese Maxey has taken a step as a shot-creator. The bench, headlined by Andre Drummond and Georges Niang, has been stellar.

This is where they stand while getting zero production from Simmons' roster spot; one would think that replacing that spot with someone who actually wants to play there would be a positive.

And for the Hawks, Simmons could solve a bit of their squad's on-court issues.

Young is averaging 20.8 drives per game, and is taking 9.2 shots via drives per NBA.com tracking data. Bogdanovic is second on the team in drives... at 6.8. Simmons has averaged north of 10 in all but one season of his career; he averaged 9.9 during the 2018-19 campaign, operating in a phone booth while splitting ball-handling duties with Jimmy Butler.

Simmons, despite his own self-creation limits, is an elite creator of offense for others. From 2018 to 2021, only Russell Westbrook (747) has assisted on more three-pointers (694) than Simmons. Young ranks No. 6 in that time frame with 650 helpers. That drive-and-kick dynamic would be a nice complement to Young, who leads NBA in rim-assists (947) during that stretch.

It's fun to imagine a Young-Simmons pick-and-roll tandem. Simmons has the finishing and playmaking chops to be a devastating short-roll guy. On one hand, he's never had a ball-handler as dynamic as Young to set him up. On the other, he hasn't consistently screened hard enough to maximize his opportunities as a roll-man.

As the Hawks have seemingly leaned into more switching this season, is there a better fit for that kind of scheme than Simmons? Having Simmons in the frontcourt could open up a world of grab-and-go sequences that can't be replicated by anyone else in their frontcourt.

(Well, there's rookster Jalen Johnson, but he isn't on the main roster right now, much less in the big-boy rotation.)

And to that point: the Hawks are 19th in transition frequency this year after ranking 20th the season before.

The Sixers have ranked seventh, eighth, 15th (the Al Horford season) and fifth in transition frequency over the past four seasons, mostly off the strength of Simmons pushing the pace.

There are half-court questions to be had, dependent on lineups. What would a potential Simmons-Collins-Capela frontcourt look like, especially when Simmons isn't involved in ball-screens?

Luckily, Simmons has experience navigating tight quarters. He's had to operate around the dunker spot (subscribe!) when necessary. He's also adept at making slot cuts from the perimeter if defenders cheat off of him.

Of course, that's making the assumption that all three would play together.

If the Hawks are intent on switching as much as they have been this season, they could opt to start Simmons and Collins up front and really lean into that style. If Capela — off to a slow start on both ends this year — becomes the odd man out entirely, there are teams (DAL, CHA, BKN, TOR) that make sense as suitors when he's trade-eligible this offseason.

The real question is one I admittedly don't have a great answer to, that question is: What would the Sixers want from the Hawks?

Aside from the optics of trading with the team that just beat you in the postseason, it would take some creativity from Atlanta's side to appease Daryl Morey. The good news is the Hawks have the salary and pieces necessary to put together intriguing packages.

Even if we were to work under the assumption that Young and Collins are off the table, the Hawks have three young pieces (De'Andre Hunter, Cam Reddish, Onyeka Okongwu) who could potentially serve as a headliner, mid-to-high salary vets that could bolster Philadelphia's rotation and most of their future picks moving forward.

An example — example, people! — of something that works salary-wise:

Just eye-balling it, I'd imagine the Sixers would want more in terms of draft capital. They might push for Okongwu over Johnson if they'd prefer a young big in the pipeline behind Embiid. Have your own fun with the trade machine if you must.

The important thing here is that there's a conversation to be had between the two sides.