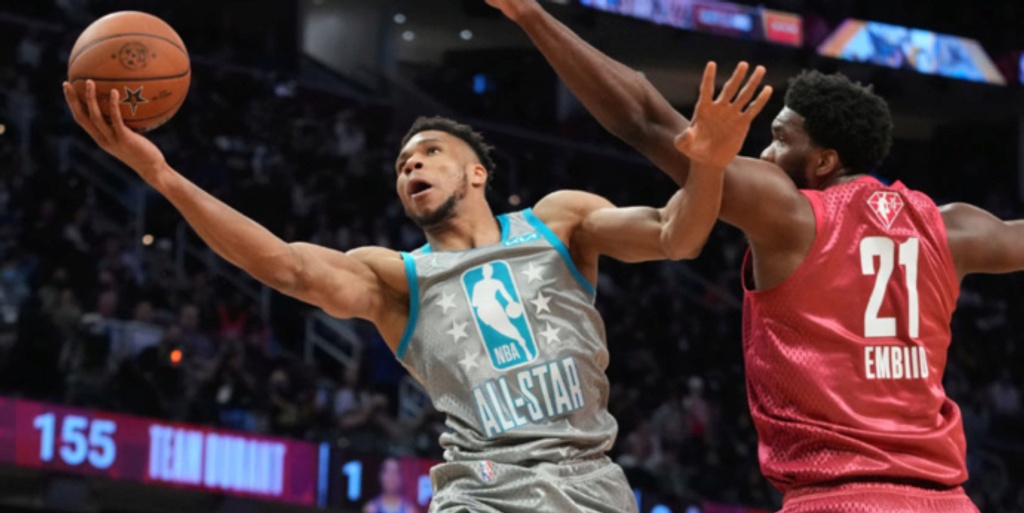 With the actual NBA All-Star Game now complete, let's review the first four months of the 2021-22 NBA season and acknowledge those players who have established themselves as stars in fantasy hoop leagues.

Listed below are the starters and reserves for each conference:

Shockingly, Steph Curry was mired in a nasty slump for much of January and, as a result, is shooting 42.7% from the floor this season overal (he's never shot below 45% in any other season of his career). However, Curry's game remains well-rounded, as he's averaging 6.3 dimes and 5.3 rebounds. He is such a prolific three-pointer shooter (he's made at least 50 more treys than every other player in the NBA this season) and consistent free-thrower (converting 91.9% of his freebies) that he still ranks top-five in nine-category fantasy formats. Steph showed why he's the greatest shooter of all time on Sunday night, pouring in 50 points on 15 made treys.

King James has received abundant (and well-deserved) recognition for the numbers he's posted at an advanced age this season, but Chris Paul's production has been equally impressive. The 36-year-old CP3 is on pace to become the first player in NBA history to average at least 4.5 rebounds and 10.5 assists while also averaging fewer than 2.5 turnovers per game. (Unfortunately, we learned over the weekend that Paul suffered a right thumb avulsion fracture and is expected to miss six-to-eight weeks.)

Coming into 2021-22, most pundits assumed Nikola Jokic wouldn't be able to match the incredible all-around fantasy numbers he posted last season. Yet, the No. 1 overall-ranked fantasy player in the sport has exceeded his stats from a year ago. He's currently averaging more points than Curry and Devin Booker each, more rebounds than Giannis Antetokounmpo and Joel Embiid each, more assists than Ja Morant and LeBron each, more steals than Mikal Bridges and Patrick Beverley each, and more three-pointers than Paul and Bradley Beal each. Think about that for a second.

Maybe, at some point, Father Time will catch up with LeBron James. But not this year. Somehow, James is averaging more points (29.1), assists (6.5) and rebounds (7.9) this season than he did 10 years ago in 2011-12, when he won the regular-season MVP award and Finals MVP after leading the Miami Heat to a title. Oh, and LeBron is also averaging a career-high in treys (2.8), as well as a block per game for the first time since 2009-10.

Karl-Anthony Towns is a center, but carries power-forward eligibility in many fantasy formats, so we'll slide him into the starting lineup here. KAT proclaimed himself the best big-man shooter of all-time earlier this season, and his long-range skills were on display during All-Star weekend when he captured the 3-Point Shooting Contest crown. On the season, Towns ranks seventh overall in per-game value due to his versatile production and accuracy from downtown (40.9%).

KAT went NUCLEAR in the last round 🔥 pic.twitter.com/HmHhr2GDsD

Dejounte Murray has been a beast in fantasy hoops this season. In October, his average draft position was 52 overall in Yahoo leagues, but he now ranks inside the top-10 overall in per-game value. Not only does Murray lead the league in steals, but he's also averaging career-highs in assists (9.3) and rebounds (8.3).

Donovan Mitchell has taken his fantasy game to a new level this season by drastically improving his efficiency. Donovan is posting career-highs in field goal percentage (45.6%) and free-throw percentage (87.3%), as well as steals (1.6) to go along with his 25.7-point, 5.2-assist and 4.2-rebound season-average line. Sum it all up, and Mitchell ranks just outside the top-10 overall in nine-cat formats.

Devin Booker has been solid all season but was red-hot over this past month. Book entered the break averaging 29.4 points, 4.8 rebounds, 4.5 assists and 1.2 steals to go along with 2.7 made triples per contest over the Suns' last 18 games.

Rudy Gobert is currently averaging 15.9 points (on 71.1% shooting) and 14.8 rebounds per game. He has a chance to become the first and only player in NBA history to average 15+ points and 15+ boards while also shooting above 70% from the field.

Tyrese Haliburton exploded onto the scene this season and did the vast majority of his damage in Sacramento before being shipped off to Indiana. When the Kings handed Haliburton the keys in December until he was moved, he averaged 16.1 points, 8.9 assists, 3.9 rebounds and 5.6 triples while slashing .472/.428/.868. He is on pace to become just the second player in NBA history to average at least 5 assists and two made three-pointers per game while shooting over 40% from deep in each of his first two pro seasons. The only player to have previously accomplished this feat is Curry.

Luka Doncic was a bit inconsistent over the first half of the year, but he entered the All-Star break on a mind-boggling tear. In the four games the Mavs played after trading away Kristaps Porzingis at the deadline, Doncic averaged 41.5 points, 12.3 rebounds, 7.0 assists and 5.5 made three-pointers (shooting 45.8% from deep).

Ant-Man is establishing himself as a fantasy stud early on in his career. Earlier this month, he scored his 2,500th career point, making him the fourth-youngest player in NBA history to reach the 2,500-point plateau. LeBron, KD and Booker are the only players to get there faster.

Ja Morant is on pace to become the sixth player in league history to average at least 25 points, 5 rebounds and 5 assists per game over an entire season before turning 23 years old. The other members of this club are Oscar Robertson, Michael Jordan, Tracy McGrady, LeBron and Luka.

Freddy VanVleet had been making steady progress in recent years, but established himself as an unquestioned All-Star this season by posting career-highs across the board. He is currently on pace to join James Harden and Damian Lillard as just the third player in NBA history to average at least 7 dimes and 4 made three-pointers over an entire season. FVV ranks eighth overall in per-game fantasy value.

The Hawks have stumbled this season, but their disappointing record can't be pinned on Trae Young, who is again posting awe-inspiring numbers — particularly in the point and assist categories. In his career, Young has scored at least 20 points and dished out 10 or more assists in the same game 84 times. That's the most such games by any individual player dating back to the start of the 2018-19 season (Harden and Doncic rank second and third, respectively).

Considered by many the odds-on favorite to take home the 2021-22 MVP award, Joel Embiid leads the league in scoring at 29.6 points to go along with 11.2 boards, 1.4 blocks and a steal per game. He's also averaging career-highs in assists (4.5) and treys (1.3). Just as importantly, he's avoided injury this season, only missing multiple games due to COVID-19 protocols.

Despite struggling from downtown (shooting below 20% from behind the arc), Jimmy Buckets is stuffing the stat sheet on a nightly basis once again this season. Due to his well-rounded game, Butler ranks sixth overall in nine-category fantasy formats, one spot behind Curry and one spot ahead of KAT.

Giannis somehow keeps improving. He's currently averaging a whopping 29.4 points (on 54.7% shooting), 11.2 rebounds, 1.0 steals, 1.4 blocks and a career-high 6.0 assists. He's on pace to finish the season at 25/10/5 for the fourth consecutive season. No player in NBA history has ever averaged 25+ points, 10+ rebounds and 5+ assists in four separate seasons — let alone four in a row.

Despite dealing with hamstring injuries (and a desire to leave Brooklyn) that have kept him out of 15 games this season, The Beard is still posting Harden-like fantasy numbers. It will be fascinating to see how he meshes with Embiid now that he's in Philly.

Had it not been for the sprained medial collateral in his left knee that has sidelined him since mid-January, Kevin Durant would undoubtedly be a fantasy All-Star and, quite possibly, the favorite to win the 2021-22 MVP award. KD was playing at an insanely high level before going down.

LaMelo exceeded expectations as a rookie and has taken an even more impressive step forward this season, averaging 20.0 points, 7.5 assists and 7.1 assists per game. Once he improves his field-goal percentage and cuts down on his turnovers, he'll be a first-round fantasy pick for the next decade or so. When Ball entered Sunday's contest, he became the fourth-youngest player to appear in an All-Star game, behind only LeBron, Kobe Bryant and Magic Johnson.

Over the final two weeks before the All-Star break, DeRozan became the first player in NBA history to score 35 or more points and shoot 50% or better in seven consecutive games. That's something neither Wilt Chamberlain nor MJ ever did. So, yeah, that's pretty good.

DeRozan (38 PTS) balled out against the Kings 🔥

Tatum's Effective Field Goal percentage has dipped from 53.0% in 2020-21 to 50.0% this season, but all of his other numbers have remained solid. In addition, he's pulling down a career-best 8.4 rebounds per game, which have enabled him to return second-round fantasy value.

Vooch has seen his scoring average dip a bit this season, but he's still found ways to keep fantasy GMs happy. He has a chance to become just the fourth player in NBA history to average at least one block, one steal, 1.5 made treys and 11 rebounds per game.

Remarkably, Miles Bridges' ADP in fantasy drafts last fall was outside the top-100, but he currently ranks 29th overall in nine-cat formats, meaning he has provided incredible value for managers that were able to scoop him up in the eighth or ninth round back in October.