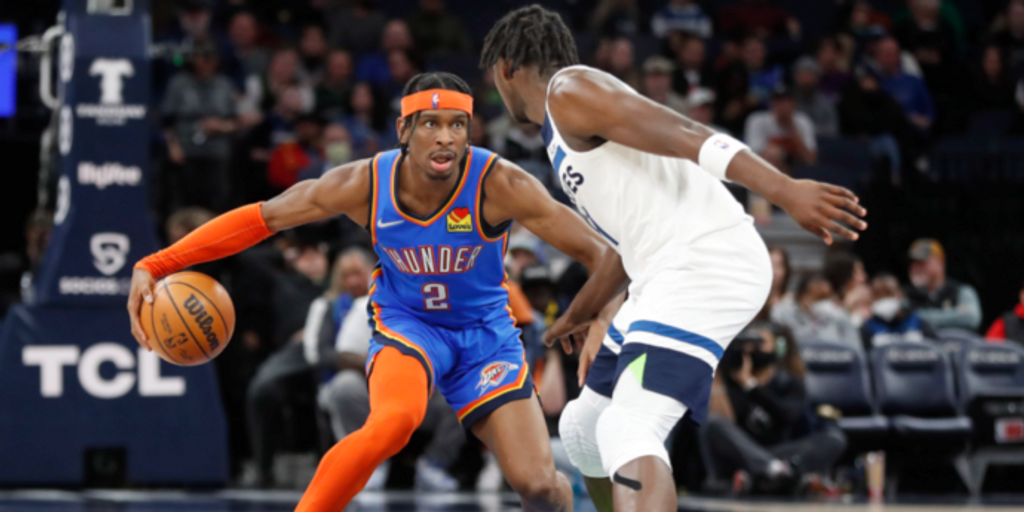 Stop and start: Taking a drive with Shai Gilgeous-Alexander

We're in the midst of a ridiculous scoring explosion.

Since the All-Star break, there have been 26 instances of a player scoring at least 40 points. Twenty different players have achieved the feat, ranging from superstars like Giannis Antetokounmpo, stars like Darius Garland, quality starters like Gary Trent Jr., gap-fillers like Josh Hart and bench assassins like Jordan Clarkson.

If the single-game excursions don't do it for you, consider that 11 players are averaging north of 30 points since the break. Only three pulled it off during the 2019-20 season — the infamous Orlando Bubble year — and that's the high mark of the past decade. We'll see what happens as the post-break sample grows, but we're in rare air right now.

The list of 11 is filled with single-name guys: LeBron, Jokic, Embiid, Giannis and Trae to point out a few. But then you get towards the bottom, and you see a pair of Kentucky Wildcats.

There's De'Aaron Fox, who is 11th in scoring (30.4 points per game) while dishing out nearly 8 assists per contest. His turbo-charged attacks — both on the ball or flowing into handoffs and cuts alongside his shiny new All-Star Domantas Sabonis — have been fruitful. It helps that the jumper (38.6% from three on 5.7 attempts) is falling right now.

And then, right above him on the list is Shai Gilgeous-Alexander, who is quietly averaging 30.6 points over his last 10 games.

He isn't just getting buckets, but he's doing it efficiently. His 62.9% True Shooting percentage is one of the best marks in the league among high-usage players. The impressive part is that the bulk of his success has come in the interior.

Frankly, there's no driver in the league like SGA. There are numbers to quantify that; he's averaging the fourth-most drives since the break (22.9), ranks second in drive scoring (13.9) and is the only player converting more than half of his drive-based shots (51.5%) while attempting at least 10 of them per game.

While we're at it, here are how some notable names are faring on two-point shots since the All-Star break:

Truly, you have to watch him. Despite having sub-elite burst, a sub-elite handle and a middling vertical pop, SGA consistently gets to his spots. Factor in his supporting cast (read: general lack of spacing), and his numbers become nonsensical. He simply shouldn't be this efficient within his context, but he's good enough to make it work.

He is a beacon of flexibility and deceleration. His ability to vary his stride length — some steps are quick and choppy, others are longer — is top-tier stuff. Gaining leverage is the name of the game, and SGA stops-and-slithers his way into it on a majority of his drives.

Defenders are rarely at risk of being blown by in a traditional sense, but they can never catch up to him. More accurately, they can never match his timing.

Take this play, for example.

Cody Martin doesn't do anything wrong here. He's squarly in front of SGA when the drive starts. Even with SGA attacking his front foot, Martin is never out of position ... until the second step on the gather.

That second step is longer and more powerful than the first, allowing SGA to gain a little bit of an advantage when gliding through the air. That turns this: 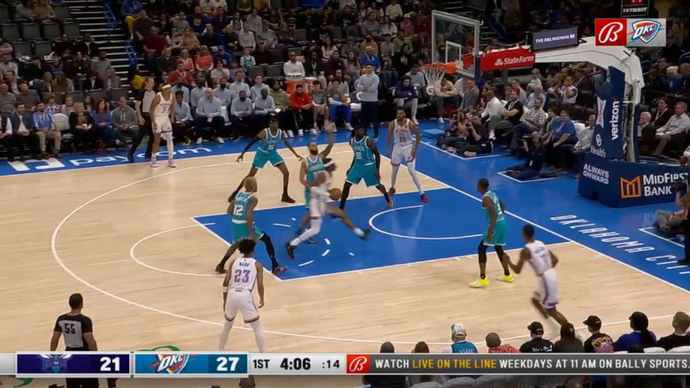 Watching SGA duck under defenders is a hidden joy. You don't have to be Allen Iverson-fast if you can get your shoulder into a guy's chest.

Martin reaches in space, but SGA counters with a behind-the-back dribble. With Martin upright, SGA crosses back to his left and sinks low to create the early advantage. 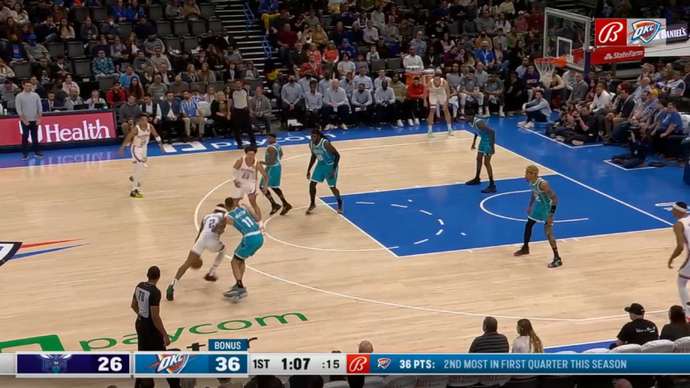 He now has Montrezl Harrell (Micro Shaq???) on a patch of land. He's able to get lower than him, too, then catch Harrell off guard with a Steve Nash-ian scoop. Harrell's barely off the ground by the time the shot's up. 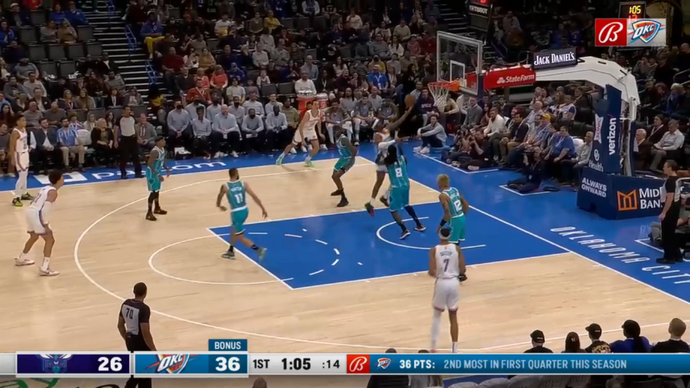 The gather timing is wild enough; SGA altering his level of explosion on the gather is some nasty stuff.

Look at how silly he makes Mason Plumlee look. Plumlee goes with a full-blown vertical contest — typically the right thing to do! — but because SGA leads at 10% capacity, he's able to slide under Plumlee for an unbothered layup.

Shai Gilgeous-Alexander has seemingly found a hack early on in his career: the actual moves don't have to change much if you alter the timing enough to throw defenders off. The stop-and-start nature of his game keeps his enemies off-balance; his finishing moves deliver the final blow.