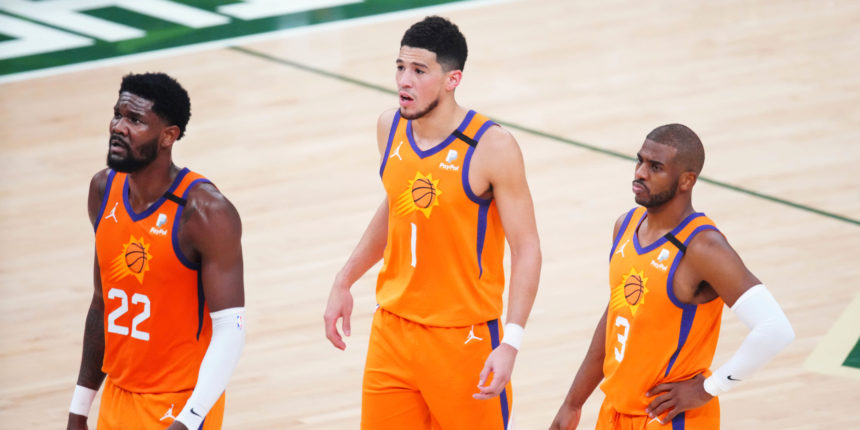 Only three times have the Phoenix Suns finished with 60 or more wins in a season. First, it was Charles Barkley in the early 1990s, and then, two-time MVP Steve Nash and the 7 Seconds or Less crew in the mid-2000s. Now, following their special run to the 2021 NBA Finals after missing the playoffs for 11 consecutive seasons, the third installment of prime Suns basketball has arrived.

When looking through the Suns’ schedule (which released on Friday along with every other organization), Phoenix is set up for one of its strongest starts in recent memory. With 9 of its first 20 games against teams that didn’t make the playoffs last season, Phoenix is well positioned to be sitting near the top of the NBA standings at the first-quarter mark — especially since the adjustment period is in the past, as everything clicked together for the Suns’ dynamic backcourt led by Devin Booker and Chris Paul.

Now, returning all of their top rotation players from a Finals appearance — and including the additions of two solid second-unit pieces in Landry Shamet and JaVale McGee — the Suns are running it back to becoming one of the Western Conference’s most formidable squads. It should also be noted that Phoenix is leaving open one roster spot into the regular season with half of its mid-level exception ($4.5 million) and full bi-annual exception ($3.7 million) at its disposal. This means the Suns are preparing to strike while the iron is hot upon a stronger buyout market than expected for the upcoming season, further bolstering one of the Association’s deepest rosters.

Although many believed the Suns capitalized upon a weaker-than-expected path to the Finals thanks to injuries (Anthony Davis, Lakers; Jamal Murray, Nuggets; Kawhi Leonard, Clippers), this team is still loaded to the gills with win-now players who can play championship-caliber basketball. And the Suns' building blocks of Booker, Deandre Ayton and Mikal Bridges have yet to even turn 25 years old. With the expected advanced development from one of the best young trios in the NBA, plus CP3 continuing to age like fine wine entering his age-37 season, Phoenix is going to create early storylines for its continued run of excellence.

The best start in Suns franchise history was from the 2004-05 roster led by Nash and Amar’e Stoudemire, checking in with a 13-2 record through the first 15 games. Examining the 2021-22 schedule for Phoenix, that similar scenario is very much in play. Phoenix is only playing one true title contender on the road in their first 15, which is against the Los Angeles Lakers on Oct. 22 at Staples Center. Here is the schedule in order:

There are only two back-to-backs for the Suns in the first three weeks of the regular season, and the final instance isn’t really a formidable test on the road against Houston and Minnesota. Aside from the Lakers, Blazers and Grizzlies, the Suns will only play against three playoff teams away from the Footprint Center over this beginning stretch. Add all of these factors together, and the Suns are an easy bet to be at or near the top of the West through the first calendar month of the regular season.

Phoenix’s 13-2 start 17 years ago has the makings of being matched or exceeded. Thanks to an early schedule heavily leaning in the Suns’ favor, there’s a plausible route to a 13-2 start.

For a team that didn’t find its footing until a few months into last season, having one of the most experienced teams back together with ample amounts of chemistry are good ingredients to rattle off a historically-hot start even with a shortened offseason. Having one of the strongest 9-man rotations in the NBA, Phoenix can feel comfortable trotting out on any night with the chance of notching another W in the win column. On pace for 58 wins over a regular 82-game schedule last season, Phoenix is poised to make another leap to the 60-plus win threshold for 2021-22.

Count out the Suns as a fluky Finals team at your own transgression. This roster is young and hungry, and has the right mix of win-now veteran pieces led by Paul to stay atop the Western Conference’s hierarchy moving forward.