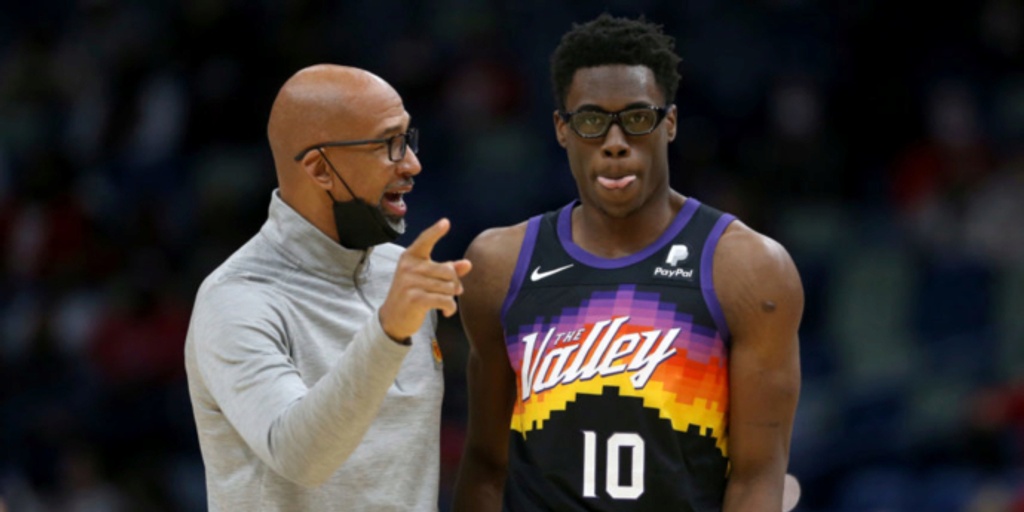 Suns have a big-man predicament they're happy to deal with

As many teams are currently in the NBA, the Phoenix Suns are getting hit hard by COVID-19. Head coach Monty Williams returned out of league protocols on Tuesday to guide the Suns to an impressive victory over the New Orleans Pelicans, and Deandre Ayton, Jae Crowder JaVale McGee have been cleared for return after reconditioning. (Only Abdel Nader and Landry Shamet remain in the protocols.)

In the absence of Ayton and McGee, two key cogs to the Suns’ success to kick off the 2021-22 campaign, an interesting debate is bubbling up to the surface out of nowhere. ESPN's Adrian Wojnarowski just reported that Phoenix signed veteran center Bismack Biyombo for the rest of the season, and immediately, he’s become a valuable piece thriving alongside Chris Paul in pick-and-roll situations.

After not playing in an NBA game for 10 months, Biyombo was picked up in free agency, and has averaged 13.5 points, 6.0 rebounds, 2.0 assists, 2.0 blocks and 1.5 steals in only 23.6 minutes over the Suns’ last two games against the Charlotte Hornets and New Orleans Pelicans. Biyombo has been a necessary piece who adds size and toughness down low, and he’s also been such a synergistic fit alongside Paul and Devin Booker, who constantly set him up around the rim for spoon-fed opportunities. Biyombo is 11 of 13 from the field.

At the same time, 2020 No. 10 overall pick Jalen Smith has finally entered the Suns’ rotation to see the first legitimate minutes of his career. With Ayton and McGee sidelined, Smith has become Phoenix’s starting center, averaging 15.2 points in only 24.2 minutes over four games with an actual rotation spot. Smith has displayed what made him so enticing during the pre-draft process: rim-rolling ability, floor-spacing acumen and underrated rim protection value. The question now becomes what happens once Ayton and McGee return after exiting league health and safety protocols.

Phoenix stunningly declined Smith’s third-year team option, a rarity for a lottery pick. The Suns let it be known that they seemingly didn’t believe in Smith’s long-term potential to find a niche role in their win-now trajectory alongside Paul and one of the best young cores in the league. It was an open secret that Phoenix was shopping Smith this offseason to find a win-now piece to bolster an already strong bench unit. Thaddeus Young was the one name who continued to be floated out there in potential trade talks revolving around Smith, but nothing came to fruition.

Now, with Smith showing true on-court value, he’s suddenly boosted a nonexistent market around the NBA. There’s a plausible scenario where Phoenix can ship off Smith’s expiring contract plus Dario Saric, who is out for the season with a torn ACL, to find a real jolt for the team's rotation.

Biyombo’s instant impact also plays a factor here, which is a stunning development. Hypothetically, Biyombo could be a better fit for what the Suns need in case of emergency behind Ayton and McGee as a third big. He not only provides much-needed size and versatility around the rim, but he’s a veteran voice in the locker room as well.

Smith and Biyombo will be redundant when the Suns are back to full health. The question that now looms is what general manager James Jones will do with Smith. Will he side with the former lottery pick who is finally flashing real long-term value, or is Biyombo’s veteran presence and cheaper salary enough at the back of the Suns’ bench?

With COVID issues ravaging rosters throughout the Association, Phoenix has stumbled into a unique situation which will now loom large over the next month. Whatever the Suns decide to do, it could have a championship-like shockwave. Whether it be acquiring a veteran like Young from San Antonio or another piece with even more win-now value (could Jerami Grant now become an actual option if the Suns are willing to trade promising young wing Cameron Johnson?), Phoenix now has moved its way up the proverbial ladder for most intriguing teams before the trade deadline.

All of the sudden, the Suns now have a big man predicament they’re more than happy to be dealing with.