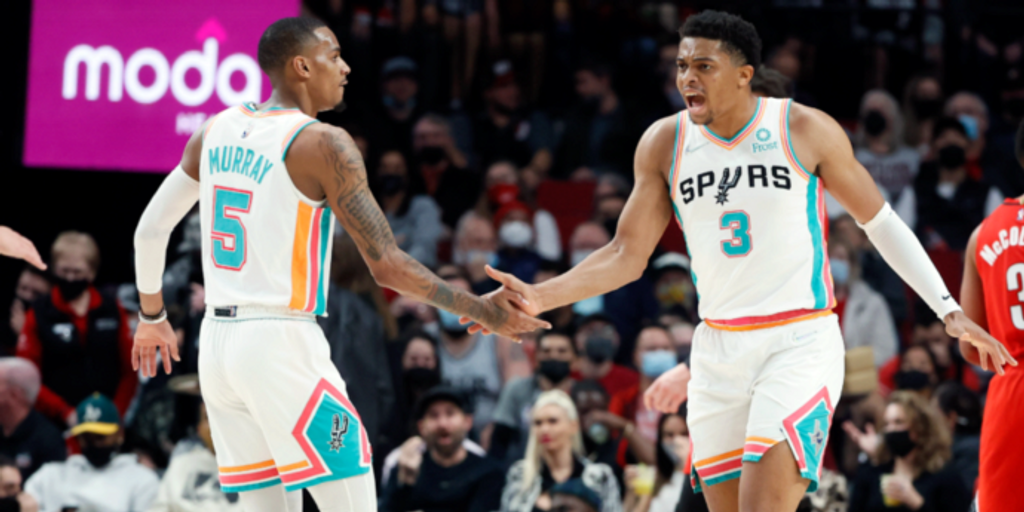 Summer plans for the Spurs, Hornets, Cavaliers and Clippers

The NBA sent four teams home from its Play-In Tournament after Friday night, but all four are poised to contend next season.

Though the Charlotte Hornets, Cleveland Cavaliers and San Antonio Spurs exited early, their trio of All-Star guards and exciting young cores mean all three should be back in the hunt — provided they beef up their rosters in the offseason. Meanwhile, the Los Angeles Clippers weren't supposed to make it this far without their franchise cornerstones; that only creates more buzz surrounding a 2022-23 championship contender.

What can these franchises do this offseason to set themselves up for success? I've written up some summer plans for all four squads, including draft assets (via Tankathon), potential free agents (via Spotrac) and a central team-building question (via my deranged mind). If you missed last week, I did the same for the 10 teams who did not crack the NBA postseason.

Central question: How can the Hornets construct an interior defense?

Charlotte's bottom-10 defense doomed the franchise several times in the regular season and, ultimately, in the Play-In loss to Atlanta. The Hornets gave up boatloads of at-rim attempts and three-pointers, and simply looked like turnstiles at times. Improvement is necessary across the board, but an on-paper view highlights a clear need for upgrades inside.

Mason Plumlee is a fine basketball player, but he's not anchoring a high-level NBA defense. Neither is Montrezl Harrell, and 2021 first-round pick Kai Jones barely touched the floor in Charlotte. The Hornets don't have a whole lot of salary flexibility with big-money deals in place for Gordon Hayward and Terry Rozier. Miles Bridges' restricted free agency is also a key offseason focal point.

Though the Hornets likely can't throw outright money at a Deandre Ayton-level restricted free agent, perhaps they could work a sign-and-trade for a lesser-known young talent. Maybe Mo Bamba fits the bill from Orlando? Charlotte was tied to trade rumors surrounding Myles Turner before the trade deadline, and the front office could also elect to sign a veteran at a mid-level exception.

Regardless of the pathway, the Hornets have needed to address the center position for years now. With a playoff leap now the expectation in 2022-23, they can't afford to let another summer slip away.

Central question: What is Collin Sexton's future in Cleveland?

The Cavaliers may have slid out of the playoffs, but this was a banner year for the franchise's long-term trajectory. Darius Garland emerged as a cornerstone point guard, Evan Mobley might win Rookie of the Year, and the frontcourt pairing with Jarrett Allen looks to be a mainstay in the Eastern Conference. Injuries ultimately derailed what was a top-four seed. Most of the rotation is under contract and under 30, hinting at continued growth.

This seaon's leap makes the situation with Sexton... difficult. Let's not forget that the combo guard is a season removed from a 24-point-per-game season as an efficient primary scorer, and that the Cavs were 19th in Offensive Rating this year. Sexton can meaningfully boost Cleveland simply as a bucket-getter, nevermind if he keeps improving as a playmaker.

What kind of contract do the Cavs offer to a 23-year-old who missed nearly a full season with a knee injury though? If a desperate team decides to throw money at Sexton to force the franchise to match, is there a limit to the front office's willingness? What would an extension mean for Isaac Okoro and Caris LeVert?

Sexton is one of the biggest dominoes in the upcoming offseason, and arguably the most unpredictable.

Central question: What does a fully-healthy 10-man rotation look like?

Nobody expected the Clippers to be a playoff contender without Kawhi Leonard and Paul George, and they still almost cracked the postseason with the supporting cast chipping in. L.A. made a splash at the trade deadline by adding Norman Powell and Robert Covington, two players who conceivably make sense next to the franchise's two stars.

This roster is deep. It's a great problem to have, but it's still a problem with several rotation options potentially hitting free agency. Covington will likely command a solid new deal as one of the league's more reliable two-way complements, and Batum could easily decline his $3.3 million team option in search of a raise. Ivica Zubac and Isaiah Hartenstein may both hit free agency; what would happen to the center rotation in that case?

The Clippers have Leonard, George, Powell, Reggie Jackson, Luke Kennard, Terance Mann and Marcus Morris locked down for next season. That's already seven rotation-caliber players, and it doesn't account for leaps from young talents like Brandon Boston Jr., Jason Preston or Amir Coffey. A roster crunch is inbound, and the organization can't let a quality addition slip away as it positions itself for title contention next season.

Central question: How do the Spurs toe the line between developmental patience and consolidation?

San Antonio valiantly fought to get to the Play-In Tournament before losing to New Orleans, but also had one of the more underrated developmental seasons across the roster. Dejounte Murray made his All-Star leap and Jakob Poeltl established himself as one of the league's better rim-protectors; the Spurs collectively were just a tick under league-average on both ends of the floor, per Cleaning the Glass.

One of the NBA's youngest rosters is well on track and about to receive another influx of potential. San Antonio could use its three first-rounders (including its own lottery pick) to add to the frontcourt or find another lead guard. However, the Spurs already have 12 players locked down for next season under at least partial guarantees, and 11 of them are under 30. They have a pathway to over $24 million in salary cap space this summer should they move on from restricted free agents like Walker.

There's an avenue, with draft picks, young players and cap space, for San Antonio to make a serious splash. Is that in the programming for this franchise, though? San Antonio hasn't acquired a star via trade in several years, unless you want to count adding DeMar DeRozan in the Kawhi Leonard blockbuster. At the same time, there are only so many minutes to go around for the young guns, especially if the Spurs think they can compete for the playoffs.