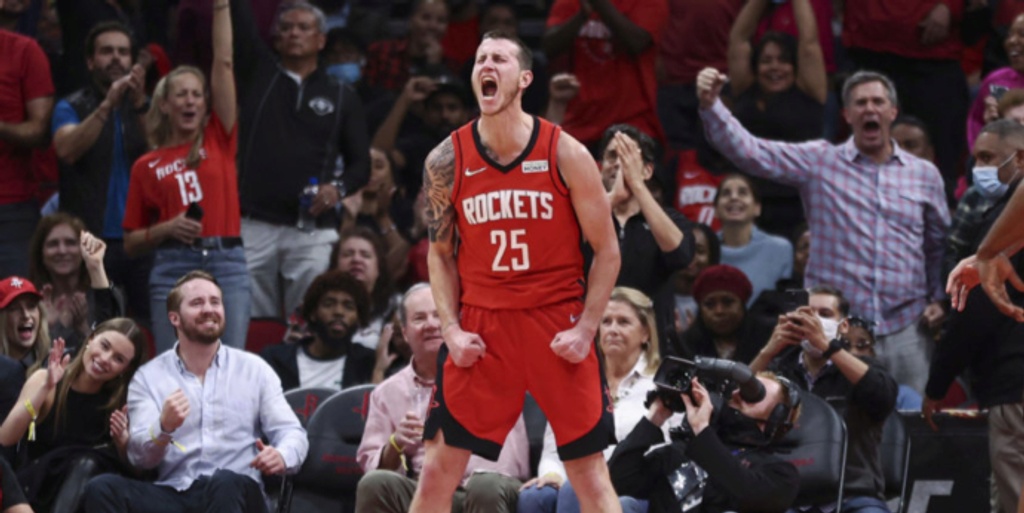 Stats Notebook: Rockets winning with an unlikely band of heroes

Three weeks ago, the hottest basketball team in the NBA was 1-16, its head coach was reportedly on the hot seat, and its best guard was asking why he couldn't play.

Now, the Houston Rockets are steamrolling through their schedule (albeit an easy one) and have won seven contests in a row — the longest active streak in the entire league.

According to Cleaning the Glass, since Nov. 24 (when the streak began), Houston has the third-best offensive rating in the NBA; the team ranks 27th on the season. Further, parts of the streak have come without No. 2 overall pick Jalen Green, top scorer Christian Wood and lead ball-handler Kevin Porter Jr. due to injuries.

The Rockets have done it with a true ragtag bunch of players I thoroughly enjoy, ranging from unproven rookies to undrafted fliers to castoff veterans. In their most recent win against the Brooklyn Nets, Houston was without Porter Jr. and Green, but had six players reach double-digit points. Only 32-year-old Eric Gordon and 2021 No. 24 pick Josh Christopher were drafted.

Garrison Mathews was cut by the Boston Celtics in training camp after two seasons in Washington. The 25-year-old forward has now latched on with Houston — and is leading all NBA wings in points per shot attempt (1.37). His shot diet, per NBA Stats:

That's the whole thing. Mathews, like Stephen Silas and the Rockets, is an efficiency extremist.

Undrafted guard Armoni Brooks has taken on a rotation role since Houston's last loss to the Boston Celtics. He's another volume three-point shooter who lives to fire away from above the break; per Cleaning the Glass, a whopping 76% of his shots have come from that one zone. Brooks has canned 42% of those shots since he joined the full rotation, which ranks in the 81st percentile at his position.

The 23-year-old is also a solid ball-mover. Brooks has handed out 15 assists against just 6 turnovers in those eight games, five of which involved zero turnovers at all. I'm a major fan of his game dating back to summer league, and the opportunity is well-deserved.

Of course, there's also second-year standout Jae'Sean Tate, who is building on his breakout season as an undrafted rookie in 2020-21. Tate is averaging a healthy 15.3 points, 5.3 assists, 5.0 rebounds, 1.0 steals and 1.0 blocks per game on the winning streak. He's bullied his way to the basket; 62% of Tate's shots have come at the rim on this run, and he's finishing at a high-level 69% clip. His 1.6% block rate is in the 90th percentile among forwards.

Houston obviously has Christian Wood and Eric Gordon as well, who are both making over 46% of their respective threes during this run. The rookie Christopher cashed in with 18 points on 7-for-7 shooting on Wednesday night. Journeyman D.J. Augustin may not be the engine, but he's drilled 50% of his threes while averaging 3.2 assists in 14.6 minutes per game off the bench during this stretch.

What's different is that the shots are going in. Since Nov. 24, the Rockets have the eighth-best percentage at the rim (66.4%) and are fifth-best beyond the arc (40.7%). A remarkable 67.2% of their made field goals have been assisted by a teammate, which is second among all teams over their past seven games.

Is this just some giant collective hot streak bolstered by a lull in the schedule? Or have the young Rockets finally clicked? Either way, it's been fun watching players capitalize on their opportunities — despite their record, this is a team worth tuning in to watch.