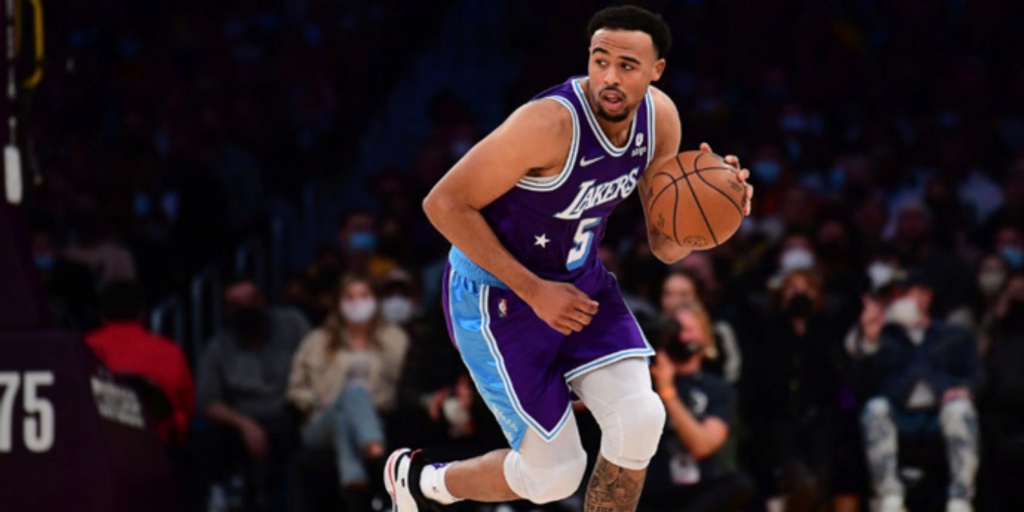 The past month saw Talen Horton-Tucker's name get thrown around far more as a bargaining chip than as an actual basketball player.

Horton-Tucker, according to most reports, was the "centerpiece" of many attempted trades by the Los Angeles Lakers. He was involved in swaths of rumored deals, including one from ESPN's Brian Windhorst that could have brought back Christian Wood and John Wall from Houston. The gossip goes back all the way to last season's trade deadline, when he was supposedly the primary holdup in a potential Kyle Lowry trade.

Of course, the Lakers didn't make any moves. Horton-Tucker remains on an ill-fitting roster that is lost at a critical juncture of the season. Many fans are probably wondering why he's still on the team and not headed elsewhere with a future draft pick.

It feels like we've been forgetting about who Talen Horton-Tucker actually is as a player. He's 21 years old and playing a role that far exceeds his age and draft slot. Now that THT's short-term future is certain, it's worth pulling some numbers to help describe his unique nature as a young talent.

Horton-Tucker was drafted No. 46 overall in 2019. He was not supposed to be here this quickly, and especially not for a team trying to contend in the postseason. He's receiving almost seven more minutes per game in what I imagine is a more stressful team environment compared to last season.

Now, I'm not going to sugarcoat anything: Talen Horton-Tucker has been one of the most inefficient rotation players on offense in the NBA. Almost every stat points this way, including Cleaning the Glass' Points per 100 Shot Attempts rate, where Horton-Tucker is in the 15th percentile (100.8 PSA) at his position. He turns the ball over at an extremely high rate (13.5%) and has below-league-average efficiency clips from nearly every zone on the floor.

But hidden between the brick houses are some positive indicators. He's a great driver. According to The BBall Index, Horton-Tucker averaged 10 adjusted drives per 75 possessions (82nd percentile) and 3.4 unassisted rim attempts per 75 possessions (86th percentile). He's extremely well-built for a 6-foot-4 21-year-old at 230 pounds, and you see that in how he gets to the basket.

Horton-Tucker's assist rate (14.7%) and assist-to-usage rate (0.77) are both in the top 20%. This is a little misleading; Cleaning the Glass has him listed as a wing this season, but I don't think that's his long-term position — despite the weird nature of Lakers rotations. Still, those are both solid numbers, and BBall Index supports a case for THT as a passer. Horton-Tucker gets an A+ grade from the database in their "Passing Versatility" metric and an A- grade in their overall "Playmaking Talent" impact estimator. You can read more about how those are calculated here.

And if you want a small carrot to chase, Horton-Tucker is making close to 80% of his limited free-throw attempts. That can often be positive foreshadowing of some shooting improvement.

The Lakers give Horton-Tucker some tough assignments. Per BBall Index, THT spends 21% of the time guarding the opponent's primary ball-handler. He has extremely high marks in "Matchup Difficulty" (80th percentile) and "Positional Versatility" (94th percentile) which essentially means that, from these trackers, Horton-Tucker is asked to handle good offensive players in a variety of contexts. And on the whole, he's been at least passable when doing so.

That's a lot to digest. All of the advanced stats should be taken with a grain of salt — there's no film here to capture how THT does what he does, and discern if the numbers line up with his fit in a team context. Again, this also isn't meant to overshadow his extreme current negatives on offense and the fact that his defense isn't helping the Lakers enough to make them, well, good.

The point is: Talen Horton-Tucker is interesting for a reason. He's a third-year pro who is only 21 and was expected to be a "project" out of the draft. He's in a larger role than anyone could have anticipated from someone on his career path. His current contract will end in 2024 and he'll still be just 23 years old.

Should the Lakers have traded him in a deal for, say, Kyle Lowry? Definitely. But that doesn't mean Horton-Tucker isn't himself worth betting on in the long-term.

A lot of other variables at play in all of this, but wow🤯🤯