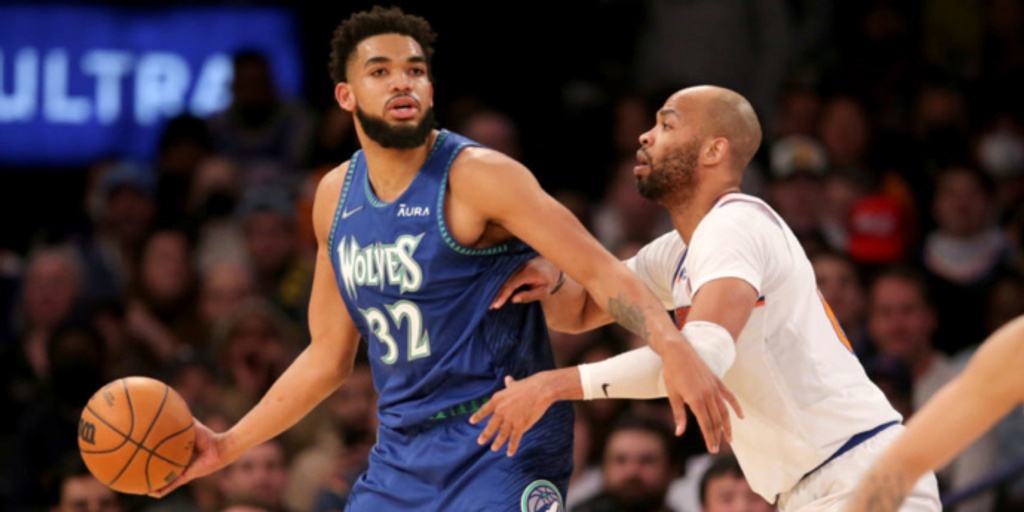 On the block: Wolves surging behind Karl-Anthony Towns-led post attack

Not the Steph Curry-led Golden State Warriors (111.6 Offensive Rating, 15th), who are winners of nine straight and generally the beacon of ball-and-body movement.

Your answer? The Minnesota Timberwolves, scorching the nets (and the Nets, hanging 136 points on Brooklyn a couple of weeks ago) to the tune of a 118.9 ORTG. Even if you shrink it down to half-court possessions, they still edge out the Suns (102.9) for the league's most efficient unit (103.6) per Cleaning The Glass.

After spending the 2021 portion of the season being a borderline-elite defense (108.2 Defensive Rating, 11th) and struggling offense (107.3, 23rd), the script has officially flipped in 2022. The Wolves' method of madness seems in line with their personnel now: We're going to blitz you with buckets, then garner enough stops (111.6 DRTG, 17th) to rack up Ws.

Everything has perked up for the Wolves, particularly in half-court situations. Just look at the shift statistically, per Cleaning The Glass:

Generally, this is the point where the "truth is somewhere in the middle" mantra kicks in. But then, you remember the Wolves had a 105.7 ORTG up until the Chris Finch hire last year, and boosted that figure to 111.9 to finish out the season. There was goodness hiding in plain sight.

If there's one thing to highlight with this recent surge from the Wolves, I'd choose their post play. There's been a better flow from it. The spacing makes (more) sense. The off-ball movement is more threatening than chaotic.

In other words: They've learned how to play off one another.

It starts with Karl-Anthony Towns, one of the most versatile offensive weapons in the sport. The Wolves do a great job of mixing in high and low post looks for him.

Having one of their best shooters make the entry pass provides an easy outlet for Towns if a double team comes. If a non-shooter makes the entry, he's likely to cut through and clear to the opposite side.

There are set plays they use to get Towns going. This is one of my favorite quick hitters, a Towns-for-D'Angelo Russell screen that flows into a middle-post. Notice the (lack of) help on this possession.

That's Russell making the entry pass. Anthony Edwards and Malik Beasley occupy each corner. Help could only come from the left wing, but Towns is decisive on the catch, making his move towards the strong-side corner with Beasley. The general rule is to avoid providing help from the strong side in that way, which essentially gives Towns a 1-on-1.

Because of Towns' otherworldly shooting ability, the Wolves are able to leverage him as a movement threat. Centers aren't used to chasing guys around screens, which leads to some uncomfortable switching.

Related: Towns has been crushing switches. Since the turn of the new year, the Wolves are generating nearly 1.2 points per possession when Towns bullies a guard or forward, per Second Spectrum.

The exit screen for Towns forces Cory Joseph on him. The Pistons send extra attention — because why the heck wouldn't they — which leads to this alignment. 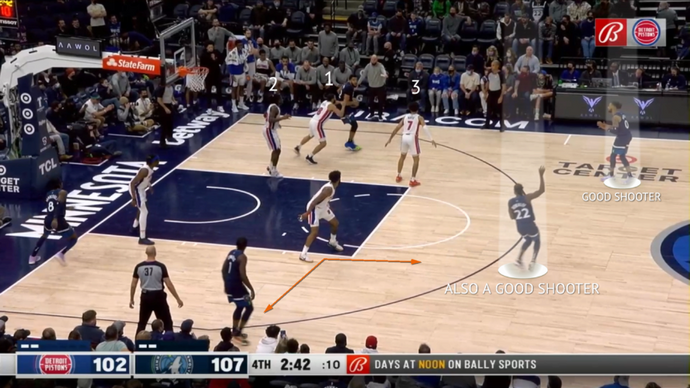 As the clip plays out, Towns actually skips a step by hitting Patrick Beverley instead of Russell. The swing goes to Edwards, who attacks the scrambling defense. Russell floats to the corner, receives a kickout, then finishes things off with a floater.

Towns doesn't get the shot, an assist or even a hockey assist, but that bucket doesn't happen without him.

How about this nifty left-side clear-out with an inverted screen from Beverley to force a mismatch?

Look at the strain that places on the Pistons. Isaiah Stewart is in an unfamiliar (and uncomfortable) help position. He can't double off of Beverley without risking an open three. And with Stewart on the perimeter, the largest player on the back line for the Pistons is Jerami Grant.

If you do want to double Towns, the timing has to be excellent. Show your hand too early, and he'll shift into QB mode. That's where the cutters get to shine.

Come too late, and Towns will either have a favorable opportunity for himself, or he'll take advantage of your defense trying to correct itself on the fly with a pass.

(That's some good stuff from McDaniels, who goes from setting a pin-in screen for Jordan McLaughlin — and being in position to do so for Taurean Prince — to cutting in front of Mike Conley since he's tasked with "splitting the difference" after Bojan Bogdanovic rotates to help.)

The outline of this kind of pick-your-poison attack has been here all season, but the execution simply wasn't. You can blame that on chemistry-building or injury woes — heck, those go hand-in-hand when you think about it.

What's undeniable is that they're executing on a new level. Through the 2021 portion of the schedule, the Wolves were generating 0.84 points per possession on trips featuring a Towns post-up. Since the turn of the year, that's shot up to 1.02, per Second Spectrum.

The Wolves are starting to figure stuff out, which bodes poorly for the rest of the Play-In hopefuls. Minnesota has a vice grip on the seventh seed (three-game lead on the Clippers), and now finds itself just a game behind the Nuggets for the sixth seed.

Best to keep an eye out on these guys.