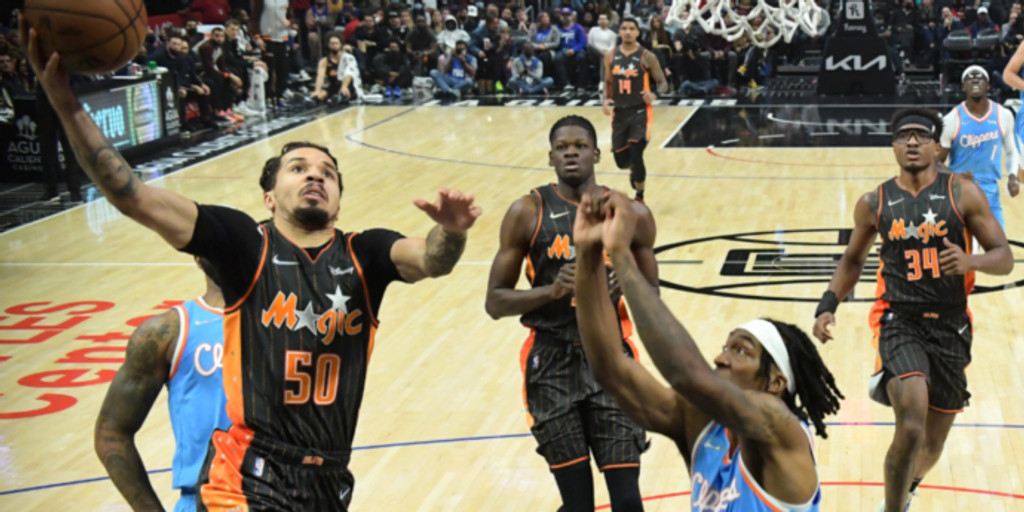 The Orlando Magic are competing. It might not show in the standings, where they have the worst record in the NBA at 12-41. It won't show in most of their catch-all metrics, where Orlando is 28th in Offensive Rating and 26th in Defensive Rating, per Cleaning the Glass. But this team is a quiet 4-3 over the past two weeks, and its young core has inspired faith — particularly surrounding the starting lineup.

Cole Anthony, Jalen Suggs, Franz Wagner, Wendell Carter Jr. and Mo Bamba have logged 503 possessions on the court together, the 11th-most in the NBA this season according to Cleaning the Glass. These players have received attention individually; Anthony is having somewhat of a breakout second season, Wagner is a contender in the Rookie of the Year race, and Suggs was the subject of a fantastic recent breakdown by our Nekias Duncan. But their synergy together is important to note.

The quintet is the centerpiece of Orlando's currently healthy roster and the barometer for its future potential. They're far from perfect together, but some of the numbers hint at enticing upside in the young squad. In 21 games played, the five have helped the Magic go 8-13 — not too bad for a pretty rough overall team.

Among 59 lineups with at least 200 possessions played, Orlando's starters have the fourth-best DRTG, giving up 95.4 points per 100 possessions. That's the best of any group on a sub-.500 team; in fact, only four lineups on sub-.500 teams rank in the top-20. Opponents have a 44.3% Effective Field Goal percentage against this group — the lowest among any qualifying lineup.

The two-big pairing of Carter and Bamba appears to be stamping its presence. Opponents are getting 25% of their shots at the rim (92nd percentile) and making just 51% of those shots (93rd percentile). There's unreal length in the frontcourt; Bamba has a 7-foot-10 wingspan, Carter boasts a 7-foot-5 wingspan and Wagner 's hovers around 7 feet.

Instead, opposing teams typically settle for long twos and three-pointers. They've yet to make the Magic pay, and are shooting just 33.2% from beyond the arc this season. If the Magic starters get into their half-court defense, good luck. They have the third-best DRTG on half-court plays among any lineup with at least 200 possessions played.

Unfortunately, the half-court offense is on the other end of the spectrum. Orlando's starting lineup ranks 53rd out of those aforementioned 59 groupings, avering just 86.1 points per 100 half-court possessions.

This simply isn't a sweet-shooting group at this stage. The squad ranks in the 53rd percentile or worse in every single shot zone recorded by Cleaning the Glass. They also turn the ball over on more than 16.1% of their possessions, which ranks in just the 19th percentile.

However, I personally believe the lineup contains plenty of upside. Anthony has cooled off after a hot start to the season, but he's a capable three-point shooter and pull-up player. Bamba (35.3% from deep) and Carter Jr. (33.3%) are both developing stretch bigs who average at least one made three per game in addition to strong numbers at the basket. Wagner's 35.0% three-point clip is one of the better rookie rates this season. Suggs might be the biggest question mark as a shooter, and he's still a rookie.

Is this a group built to last? I don't know. Orlando will likely have at least a top-five pick in an upcoming draft with three bigs and a lead guard in the top tier. The franchise also waits on perhaps its best player to return from injury in Jonathan Isaac.

First-year head coach Jamahl Mosley at least deserves credit, though, for developing a starting lineup with an average age of 21.2 into a certified-positive defensive unit. As the Magic trudge through a rebuilding season, these five players have built a solid foundation of hope.

After setting a record for the # of players in a season, the NBA hasn't seen any new players debut over the last 20 days. That plateau is pretty much unprecedented and likely means the COVID spike gave FOs a look at more than enough players to fill slots for the rest of the year. pic.twitter.com/WAbSK94zAM

Was interested to check out the relationship between last-minute timeouts and close games situations with this cool timeout data from Mike and the high/very high leverage possession counts from https://t.co/NgjzyXILD2 – not as correlated as I would have guessed! https://t.co/yGsc0gWvGe pic.twitter.com/Pf3mFmmn1x