Five years ago, around this time, Brooklyn Nets fans were arguing over Yogi Ferrell and Spencer Dinwiddie with hostility.

Seriously, go back and look. You would’ve had no idea unless you were covering the Nets, but it was a divisive time in Brooklyn’s era. (Even if it didn’t rise to the publicity of, say, Kyrie Irving’s vaccination status.)

Almost to this exact date in 2017, Ferrell memorably had what is still the best game of his NBA career, dropping 32 points in a nationally-televised game between his Dallas Mavericks and Damian Lillard’s Portland Trail Blazers while on a 10-day contract. That same day, Dinwiddie netted 13 (which tied for his second-highest output of the season), and it would be the last time he broke double figures for 10 more days.

The debate grew hilariously one-sided the following season, and Dinwiddie became a fringe All-Star candidate in both the 2018-19 and 2019-20 seasons. But the reason no one saw this coming initially is because Dinwiddie came up as a pass-first, low-turnover, traditional point guard — somebody who at one time went five games (134 minutes) without committing a turnover and took eight shot attempts per 36 minutes; that figure leapt to 13.1, 15.6, and 18.4 the next three seasons.

The inefficient, yet ultra-timely scorer who still rarely turned the ball over as a floor general in 2017-18.

The near All-Star who became a full-fledged, scoring point as a sixth man in 2018-19.

The even-nearer All-Star combo guard who averaged around 20.0 points and 7.0 assists and got to the free-throw line at will in 2019-20.

But last year, he tore his ACL for the second time in his basketball-playing life, and is still working his way back while in Washington.

The Wizards had a players’ only meeting before the regular season began. Since a 10-4 start, the team's gone 13-22. Even worse, Kentavious Caldwell-Pope and Montrezl Harrell tried putting on a WBC Heavyweight Title bout in the Wizards locker room a few weeks ago.

Dinwiddie, who turns 29 in April, claims that the topic of leadership wasn’t welcomed when he brought it up earlier this season. (He's never been shy.) And now, Kevin O’Connor of The Ringer is reporting that the Wizards don’t even want Dinwiddie there:

“The Wizards want to move Dinwiddie because he looks like a shell of his former self and his teammates don’t want him there. Schröder is fine, but he leans too far toward scoring and would be an awkward fit next to Jackson.”

To be fair, this entire Wizards team looks like a shell of their 10-4 selves from this past November, but anyway...

This trade is quite simple on paper, and it starts with Ricky Rubio’s $17.8 million expiring contract heading to Washington in exchange for Dinwiddie. Rubio has a torn ACL and is expected to return at some point, just not this season. It feels like someone should send the other a draft pick or two here, but you could make the case going either way.

For the Cavs, they’d be sending over Rubio while inheriting Dinwiddie’s sizable contract as a result, so they should probably ask for some draft compensation as a result — and would be right to do so. In the Wizards' case, they’d be trading Dinwiddie for someone who may never suit up for them and may want compensation for that reality alone.

To me, Cleveland should get the draft compensation since this deal could impact how it maneuvers this summer — including Collin Sexton’s future, which still needs addressing. The good thing is the pathway to doing that would remain, and Dinwiddie could play the Rubio role this season.

Rubio averaged 13.1 points and 6.6 assists in 28.5 minutes per contest in all but eight games off the bench, while posting .363/.339/.854 shooting splits. He was as impactful as he possibly could’ve been given the poor shooting, if you simply watched. Dinwiddie’s numbers, as outlined earlier, are strikingly similar, and coming off the bench for a good team might be more ideal for him than starting for an aimless one. And the reason the Wizards' pick is so far into the future is because the Stepien Rule prevents them from moving anything sooner. (It makes this more difficult.) 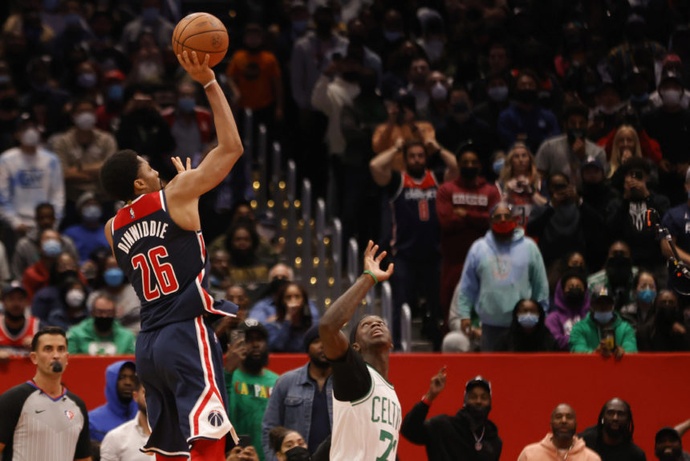 As Justin Lewis noted last week in our Celtics two-part retooling series, these dudes need an actual point guard. The version Dinwiddie seems to play now is a less-effective version of the 2018-19 combo guard he became, but again, let’s consider the environment. The Celtics are probably looking for a bigger trade deadline splash, but if pure-point Dinwiddie were to arrive in Boston, that’s a better fit next to Jayson Tatum and Jaylen Brown than Dennis Schröder is.

Because Dinwiddie's deal runs longer than Richardson's or Schröder's, you're attaching a first here, Washington, at a minimum. Maybe add a second-rounder that would come sooner.

A big part of why Dinwiddie’s been less effective isn’t only his shooting splits, but his free-throw rate is the lowest of his career at .240, and he’s only averaging 3.9 attempts from the line per 36 minutes, the lowest figure since his rookie season in 2014-15. That free-throw rate needs to elevate in Boston, and playing next to the Jays should provide those open lanes for spaced threes and clear drives to create more of that rim pressure we haven’t seen much of in Washington.

This looks ugly as hell, and is probably not very likely, but it could actually work.

For Washington, you get rid of two unfavorable contracts; BertÄns especially. You also acquire Simmons, who is beginning his max extension (has he even gotten paid from it yet since he hasn't played?) that'll run through 2025. Beal, as we know, has a player option for next summer, but is more likely to sign an extension this summer that will take him well into his 30s. The Wizards reportedly still don't want to trade Beal, but what's honestly the upside in keeping him now? To be Portland East? Regarding Tobias Harris, the Wizards may (and probably should) try rerouting him under this scenario. Harris will see over $38 million next season, and over $40 million in 2023-24.

For Philly, it finally rids the organization of the Simmons experience, which it'll probably they need to do to have any chance of competing this year. It also gets rid of Harris, but at a price. At least, Dinwiddie gives the Sixers a real point guard option to mix in, who can even play with Tyrese Maxey and has one fully guaranteed year left. BertÄns is getting between $16 and $17 million each year through the 2024-25 season, though that's partially guaranteed. Functionally, he can be a 4 next to Embiid, which may even help given the way Embiid is passing this season. The first-round picks are the reward for taking back bad contracts, and, of course, getiting Beal.

I'm still not positive it's a deal either of these teams want, but sometimes, we don't know what's best for us anyhow.